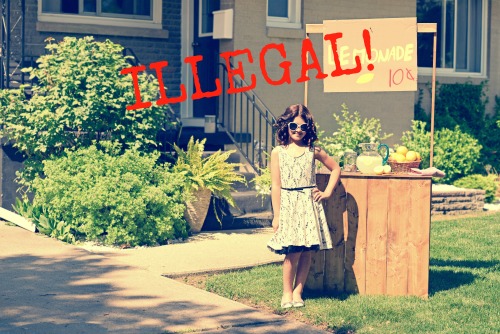 Remember when you were a kid, and summer came, and you and your siblings or friends decided it would be fun to make and sell lemonade to your neighbors?

People came by and bought little cups of your refreshing, sugary thirst-quencher when they were taking breaks from mowing their lawns or gardening.

Maybe, like me, you even sold homemade cookies to go with your lemonade. Neighbors complimented your drink-mixing and baking skills and tossed a little extra change in your money jar.

Yeah, those days are over.

You see, nowadays, you need a PERMIT to do that.

Two creative young ladies in Overton, Texas found this out the hard way earlier this week. Sisters Andria and Zoey Green wanted to raise $105.00 to buy their dad a special Father’s Day gift, so they set up a lemonade stand.

“We were trying to raise some money to take our dad to Splash Kingdom,” 8-year-old Andria explained.

An hour and $25 in earnings later, the Fun Police showed up and ruined everything.

“We were there for about an hour and the police department pulled up, code enforcement officer and the chief. She pulled me to the side and said we needed a permit,” said their mother, Sandi Green Evans.

“I felt a little confused. I was like, what is, what is going on here?” said Andria.

Right there with you, Andria.

The city agreed to waive the $150 fee for the “Peddler’s Permit,” but the girls’ mother said they hit another obstacle: they were told they’d have to get licensed by the Rusk County Health Department before being allowed the permit.

A license. To sell lemonade and kettle corn.

What planet are we on, again?

“Texas House Bill 970, or the Texas Baker’s Bill, prohibits the sale of food which requires time or temperature control to prevent spoilage. Since lemonade technically must be refrigerated to prevent the growth of bacteria, by law, the girls can not sell it without an inspection and permit,” explains KCTV.

The girls’ mother said, “I think that’s ridiculous. I think they’re 7 and 8 and they’re just trying to make money for their own cause.”

I think most rational people would agree with her.

Oh, except for Police Chief Clyde Carter, who said it is the LAW and Overton police are going to enforce it:

“We have to follow by the state health guidelines. They have to have a permit if they’re going to do the lemonade stands.”

The girls obviously had to stop selling their goodies.

“We received free passes to Splash Kingdom, where the girls wanted to take their dad for Father’s Day,” Evans said. “We got them from the owners of the theme park and then again from a radio station.” They were also given free tickets to Six Flags.

The girls were also given $200 in donations, but they aren’t keeping the money:

“We do have so many positives coming out of this, and since I don’t feel right keeping the money now that they got their dad’s gift for free, we’re going to give away the extra tickets and set up scholarships with the donations they’ve collected,” Evans said. “We’re going to give the scholarship to a local graduating high school senior majoring in business management.”

Here, the girls talk about their first run-in with The Law:

“We were doing just fine until the cops came.” Andria, if I had a dollar for each time I’ve heard someone say that…