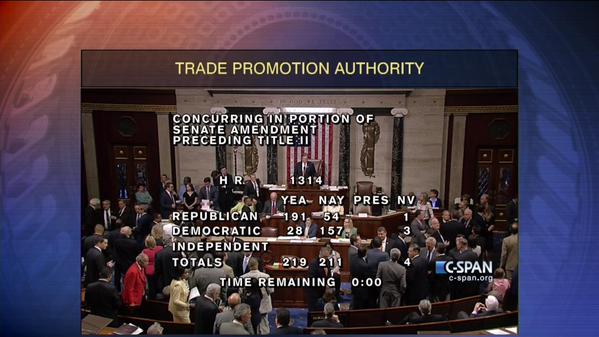 The unconstitutional authority contained in the Trade Adjustment Assistance was shot down on Friday. However, it was a Republican Congress that managed to pass the Trade Promotion authority.

The House derailed a high-profile White House-backed trade bill on Friday, a humiliating defeat for President Barack Obama inflicted by Democratic Leader Nancy Pelosi and dozens of union-backed lawmakers from his own party.

The 302-126 vote left the legislation in perilous limbo, and came a few hours after Obama journeyed to the Capitol to deliver a last-minute personal plea to fellow Democrats to give him power to negotiate global trade deals that Congress could approve or reject but not change.

Yet, it was the Trade Promotion Authority which barely made it past the House by a vote of 219-211.

First, consider that since trade agreements are about tariffs, they must originate in the House of Representative, much like Obamacare was supposed to do, but failed to do. According to Article I, Section of the US Constitution:

Treaties are something entirely different.

The House failed to pass the TAA in a landslide vote of 302-126, with only 40 Democrats voting for the bill.

However, many conservatives listen to people like Senator Ted Cruz (R-TX) regarding TPA when he claims that TPA doesn’t give Obama more authority and that Senator Jeff Sessions (R-AL) is “not accurate” about undermining US law. But that is not the case.

In fact, it does undermine the Constitution and does transfer power to the Executive Branch. It is Cruz that is not being accurate about what is taking place and this may be some of his colors showing from his ties to Goldman Sachs and his wife’s Council on Foreign Relations ties.

Before you blast me over those comments, just remember that you are being set up in all of what is taking place. Vladimir Lenin’s word have been ringing in my ears for a couple of years now, “The best way to control the opposition is to lead it ourselves.”

But it isn’t just Ted Cruz. It’s every single Congressman among Republicans and Democrats that are selling America out under the guise of “free trade.” This will cost American jobs and it will not be a fair deal. NAFTA taught us that.

In the early 1990s, the Clinton administration and Congress sold NAFTA to the American people with similar protective promises. Ultimately, according to Economic Policy Institute economist Robert Scott, nearly 700,000 US jobs were “lost or displaced” because of the agreement and the subsequent trade deficit.

The arcane world of Washington politics is now witnessing Pelosi pushing TAA while publicly denouncing TPA despite the fact TAA is designed to supposedly soften the blow of TPA once it becomes law.

Nimmo also pointed out that the US Business Coalition for TPP also “handed out $1,148,971 to senators, an average of $19,673.28 for Republicans and $9,689.23 for Democrats. The largest donor to the U.S. Business Coalition for TPP is Goldman Sachs, followed closely by Citigroup, Morgan Stanley and members of the military industrial complex, including GE, Halliburton and Northrup Grumman.”

This is not a good development for America or her workers. For a clear understanding of what is actually going on in all of this, I highly recommend the following video to educate yourself.