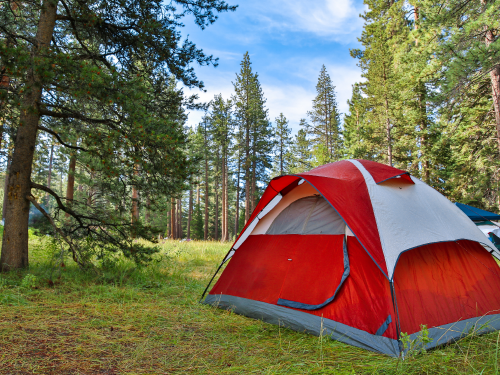 Last month, a Michigan family decided it would be fun to go camping for the summer, on a 10 acre plot of land they had recently purchased. Christopher and Antonia Hernandez wanted their six children to experience the outdoors, and get a taste for off grid living. But after living in several large tents for 9 days, their rural experiment came to an abrupt end.

On May 19, the parents left the property to do laundry at a laundromat, as well as to buy food and some fencing for the animals. The younger children were left in the care of their 15-year-old son, who is nearly 16.

“When we arrived back, the Otsego County Sheriff’s Department was at the property claiming to have received a report of squatters on the land,” Antonia said. “We provided documentation of our right to be on the land, which was verified the next day by the land owner.”

A CPS representative also was on the property, and had concerns about the living conditions. CPS made four allegations, according to the official court document:

The children, whose ages ranged from 7 months to 17, were promptly taken away from the parents by CPS and the Otsego County Sheriff’s Department. However, many of the reasons given for the seizure of these children don’t hold up. For one, the kids appear to have had everything they needed. Their lifestyle was by no means “easy” according the standards of someone living on the grid, but they were in good hands.

The family had a generator, and had purchased a pass to use the showers at a nearby state park. The multiple tents they were using were very large, and were sufficient to house the family and their belongings. They were also receiving an abundant supply of drinking water by filling 5 gallon jugs at Walmart, and collecting rainwater.

The claim that some of the children were “cold” also doesn’t hold up. The oldest girl with Cerebral Palsy, had a temperature of 96 degrees after the government officials left her tent flap open for an hour and a half. Her temperature quickly stabilized as soon as she was admitted to the hospital, where doctors claimed she was “very well taken care of.”

The “diaper rash” accusation is equally absurd. Apparently these CPS workers have never had children of their own. If they did, they would know that the vast majority of parents have experienced this problem with their infants, and it is not necessarily a sign of neglect. In any case, the rash had already been healing when CPS arrived.

And since when is a teenager too young to look after his/her siblings? I guarantee you there are millions of single parents out there that have had to leave their kids home alone to take care of each other. If the adolescent is a responsible person (which this one probably is after taking care of an older, disabled sibling) then the other children are probably in good hands.

Unfortunately, none of this was taken into consideration by the authorities. The parents were given no choice but to leave the property and hand over their children to CPS. They weren’t even given the option to return to their original residence (which was an ordinary grid connected home). Fortunately for these parents, their children were returned to them on June 10th, after 21 days. However, the kids were not returned on the grounds that CPS had made mistake, or overreacted.

The only reason the Hernandez family has been reunited, is due to the Tlingit ancestry of the mother. Federal and Michigan state laws create an additional barrier for separating Native American families. If not for her ancestry, the kids would probably still be in the hands of CPS.