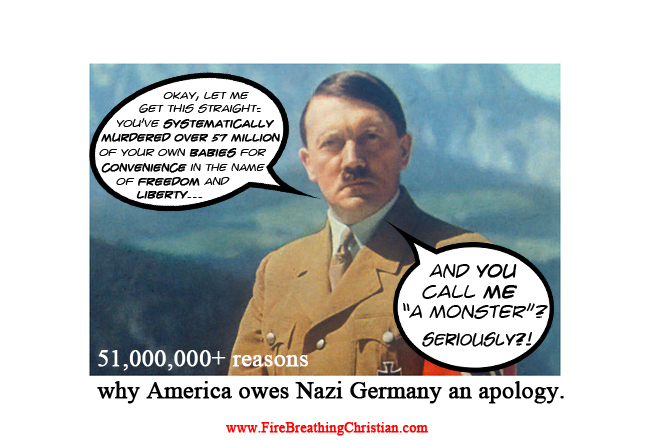 The typical American guy is a stat hound. In the Internet-fueled era of things like fantasy football and day-trading, we’ve become all about the numbers.

We capture, track, and compare everything…well, everything but the things that matter most. (See: Fiat Bread and Football Circuses in Romans 1 America.)

We know the passer ratings and touchdown-to-interception ratios of our favorite quarterbacks, the average rushing yards per game and fumble percentages of our favorite running backs and the net yardage allowed ranking of our favorite football team defenses. (See: Men: Do you know more about sports than you do about Scripture?)

We know all about hot tech stocks and hot med stocks and hot oil stocks. (Or at least we think we know about ’em; see: Fear not, stock-holders! The Monopoly money printing presses are here to save you (and bury the rest of us)…again.)

But what do we know about the stats that matter most?

You know, like the number of “dollars” that have been created magically out of thin air by those atop the present system so that they might literally own and control everyone and everything beneath them? (See: Fiat $lavery: We have been bought and paid for…with nothing.)

Or maybe the number of tangible obliterations of personal privacy, individual freedom and liberty here in “the land of the free” and the home of the NSA just over the past twenty years or so? (See: So the American State has to destroy our freedom in order to protect it? Oh yeah, that makes sense.)

Or maybe the number of wars (for the sake of peace, of course) that we’ve been encouraged to get all “Rah! Rah! ‘Merica!” about over the same stretch of time? (See: Problem>Reaction>Solution – Why we will beg to have our freedoms taken away and go to war forever.)

Okay, so maybe we aren’t exactly encouraged to contemplate and understand those numbers. We should just stick with mostly fictional sports, financial and political theatres, or so we’re told.

But told by whom?

Well by ‘Merica, of course!

Or, more precisely, by all of the systems and tools at the disposal of the modern American Corporate State, which includes everything from CNN and Fox News to government run “schools” and the contrived political puppet show that is Washington DC.

Obviously those folks are not all that into the thought of average Americans taking seriously the things and numbers that matter most.

Which is why I’d like to take a sec to focus here on one mucho important and heartbreakingly revealing stat.

This particular statistic has to do with how we compare as a people with the agreed upon standard of evil in the modern era: Adolf Hitler’s Nazi Germany

But consider this, my fellow ‘Mericans: We are much, much, much worse than Nazi Germany in the ways that matter most.

Insulting and dangerously unpatriotic, you say?

Well…let’s go to the numbers, shall we?

As in: Nazi holocaust vs. American holocaust.

Not even close, is it?

When you throw in noteworthy amplifying facts such as American holocaust victims being our own freely offered children, whom we sacrifice for profit and convenience, the American lead over the Nazis gets even bigger, doesn’t it?

And when ya figure in that while some significant portion of the German population back in the ’30s and ’40s might not have known or fully understood what was going on there, but that here in America practically everyone knows exactly what is going in the thousands of mass murder factories freely operating across the land with impunity (all in the name of liberty and freedom, of course), the already ginormous American lead over Nazi Germany gets even more ginormous, doesn’t it?

Then when you sprinkle on top the fact that here in ‘Merica we do this satanic child sacrificing deed daily while proclaiming ourselves to be a nation of “Christians”, well…the American lead goes from merely uber-ginormous to practically infinite. Nazi Germany isn’t even in our rear-view mirror at this point.

America the proud has won this thing going away!

So it seems as though we (America) owe them (Nazi Germany) a sincere, heartfelt apology for daring to paint them as the modern masters of systematic cultural evil. The suggestion that they are anywhere near us, much less worse, when it comes to the mass murder of innocents for the most sickeningly selfish of reasons (convenience) is utterly ridiculous.

To help bring some needed (albeit painful) clarity to this hopefully productive therapeutic process, I’d like to offer for your consideration a list of the 51,000,003 reasons why America owes Nazi Germany an apology:

#1-51,000,000 – This is a very simple, conservative and coldly clinical way of symbolizing merely the net difference in death totals between those processed through the Nazi holocaust and the (ongoing) American holocaust, but it has to be noted, so here it is. There is very likely much more infant blood on the hands of Americans than symbolized by even the massive number posted here, and ours is an ongoing holocaust (we are openly murdering and dismembering our own children on the altars of godless “liberty”, “freedom”, profit and convenience even as you read these words), so this number, huge though it is, significantly understates the gap between the murderous evil of Nazi Germany and America.

#51,000,001 – We just love to portray Nazi Germany’s totalitarian state as the epitome of evil and as a terror to its own citizens…while here in the good ol’ U S of A we enable a government that openly violates the freedoms, liberty and privacy of its citizens on a scale that would make the Gestapo weep with envy. (See: So even the Germans are creeped out by our Surveillance State.)

#51,000,002 – We also really dig using the Nazi SS and Gestapo “army in black” vibe as a model for uniformed evil in everything from Star Wars bad guys to…well…our own modern American police forces, which is kinda weird, right? And hypocritical, maybe? And creepy, certainly.

#51,000,003 – Last, but certainly not least, on the list of reasons why America owes Nazi Germany a groveling, jackboot kissing apology: We claim to be a “Christian nation” in one way or another.

That last reason on the list is the first reason why, before even groveling and begging Adolf & Friends to forgive us, we should first beg and plead that Jesus Christ the reigning King of creation, in whose name we have so often done these things, would break us of our pride and save us from ourselves before He does what He must with any people as profoundly warped by pride as we’ve become.

So the choice stands for us now as it did for Germany then: Repentance and submission to the perfect, loving rule of Christ as King, or death and destruction under the righteous wrath and justice of Christ the King. (See also: How to truly love (and really save) America.)

The main difference between America and Nazi Germany is that we have much, much more to answer for…and the clock is ticking… 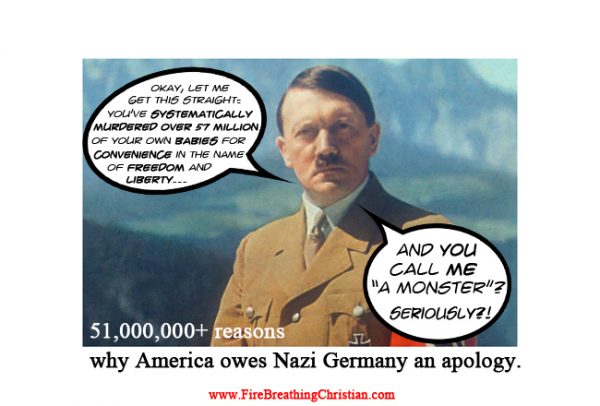