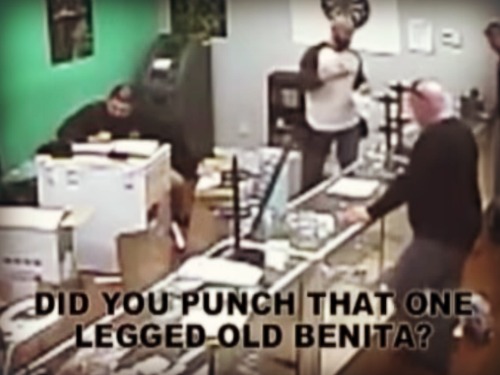 Check out the hidden camera video below of Santa Ana police raiding what they claim is an unlicensed marijuana dispensary.

The team of officers broke in the door, cleared the place out, and removed all the surveillance cameras first thing, or so they thought…

The footage shows that eight officers had masks on and their guns drawn when they entered Sky High Holistic, shouting “everybody on the ground” to customers and workers. After clearing the building of everyone present, the police began to remove the store’s mounted surveillance cameras, though they did not get the ones hidden by the owners when they heard about the upcoming raid.

Marla James, the amputee seen in the footage, intends to sue the city for allegations of police misconduct. Her reasons stem from a part of the video showing that as soon as she left the building, the cops started to crack jokes about her condition. One cop even said, “I was about to kick her in her f—ing nub.”

“They intimidated me. They threatened me,” James said, who is considered legally blind. “What they did, it was like shooting fish in a barrel.”

The rest of the video appears to show at least two different officers sniff, then eat, the store’s pot edibles, while the other officers sought out the rest of the store’s surveillance devices. Matt Pappas, the attorney who edited the video to cut out dead air, plans to bring a suit against the city on behalf of James and the store. “I’d like to see the police officers disciplined for the behavior that goes on here. I’d like to see the city stop engaging in illegal conduct.”

What a pathetic goon squad on parade. Little better than a bunch of middle school bullies. And for what? A medicinal marijuana dispensary? Ooooh. So many “victims” for that “crime”.

An internal affairs investigation is ongoing according to Police Chief Carlos Rojas. A spokesman for the department claims that because the footage is edited down just to show the parts where things are happening, it doesn’t tell the whole story.

Really? Did the store owner edit the footage to show the cops making jokes about assaulting a wheelchair-bound amputee? How about editing it to make it appear like the police are playing darts and eating pot brownies in front of the camera?

These cops were having a blast being little more than bullies. This is what they are really like when they think the public isn’t watching them.

How is anyone supposed to take those in authority seriously? And every time a video like this comes out, people are quick to rush to the defense of cops and claim this is a just rare occurrence. Oh really?

How’s that exactly? Stories like this are in the news every day. It’s beyond common. In fact, if something like this doesn’t happen for one whole day in this country, people start to wonder if the Earth has sudden shifted dimensions or there’s been a tear in the space-time continuum.

This behavior isn’t rare. It’s expected now. We just know more than we used to about police behavior these days because we have more hidden cameras that garner footage like this. Sad we have to sacrifice our own privacy and put ourselves under constant surveillance just to protect ourselves from the people that are supposed to be “protecting and serving” us.

Hey guys… way to “protect and serve” there.