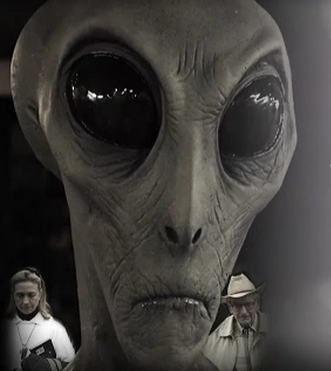 Whatever the real truth is actually out there, rest assured the Powers That Shouldn’t Be will do whatever it takes to make sure we are never allowed to learn it.

Instead we’ll get drip-fed a bunch of government lies, illusions, distortions, and half-truths as preprogramming for a sinister agenda. The real truth certainly isn’t going to come in the form of the Clintons (“I want the public to see my emails!”) and Bill’s bad jokes about “investigating” Area 51, Roswell, and other government black sites. While the probability of life on other planets is surely compelling, we’re not going to find the truth through gatekeepers in establishment positions of power, be that in government, Hollywood, or via elitist billionaires who have documented ulterior motives.

A secret government has set up shop, is deeply rooted, and there’s no getting to the truth without going through them first. Until we deal with the reality of the breakaway civilization that’s been keeping mankind at large in the dark (sometimes literally) for centuries, we can hardly process the significance of contact from beyond.

Extraterrestrial life is being held and will be dealt as a card that requires ascension to world government and submission to a higher earthly authority. So compelling indeed is the opportunity to use aliens as a pretext for total control, that leader after leader have hinted at its unifying power over humanity. In the background, the possibly of a Project Blue Beam scenario has been prepared should the time come for the last card to be dealt to a humanity unwilling to march dutifully along under the banner of a one world government New World Order.