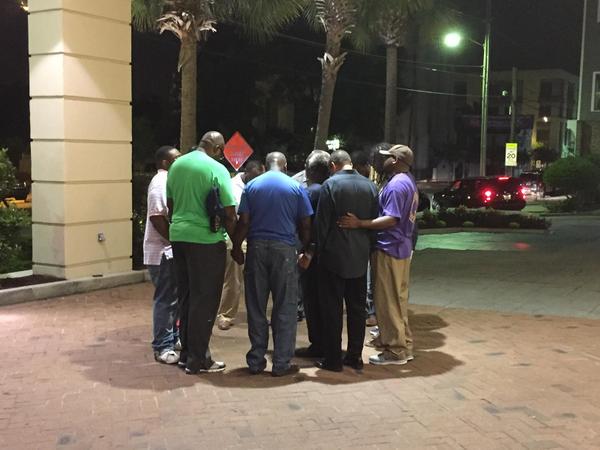 Already being hailed in the media as a “hate crime,” it’s being reported that a white gunman walked into Emanuel African Methodist Episcopal Church, one of the nation’s oldest black congregations, during a prayer meeting Wednesday Night just after 9pm and opened fire, killing eight people and wounding two others. One of the two died later at the hospital.

Among the dead is State Senator and Rev. Clements Pinckney, the church’s pastor. The news was confirmed by Al Sharpton:

Rev. Clements Pinckney, a SC legislator is among the 9 killed in SC church. I am reminded that he helped lead our prayer vigil for Scott.

Shortly after the shooting, reporters and others were kept away from the scene on the claim there was a bomb threat near the church. That threat has since been given the all clear.

The gunman is still at large and a manhunt is currently underway. Description of the shooter from the Charleston Police Department:

Reuters is reporting, “The shooting called to mind a 1963 bombing of an African-American church in Birmingham, Alabama, that killed four girls and galvanized the civil rights movement of the 1960s. The Charleston church is one of the largest and oldest black congregations in the South, its website says.”

(INTELLIHUB) — A gunman has shot and killed 9 people at a historic black church in Charleston, South Carolina in what the police have called a hate crime.

Longtime state senator and pastor Clementa Pinckney was among those killed after the gunman opened fire on a night-time bible study class. It is unknown how many people were at the bible study at the time of the shooting.

The suspect, who is still at large as of this writing, is described as a “a white male, 21 years old with sandy blond hair.”

The church, Emanuel African Methodist Episcopal, has a long history in the civil rights movement, having been burned down and rebuilt as well as visited by various civil rights leaders throughout the years.

Citizens near the scene of the massacre are reporting a heavy police presence as law enforcement looks to catch the suspect before any other attacks are carried out. A reward will reportedly be announced if he is not caught before the night is over.

Police have revealed that some people in the church survived the shooting but the total number has not been released.

The response on social media by some is to immediately blame white people as a whole and the supposed white supremacy nature of the United States.

There are sick murders every single day by all races against all other races yet there is an instant rush to attack white people as a whole within an hour of the shooting. Some are even calling for taking away ALL white peoples guns.

Some of the tweets are clearly coming from some very sick and possibly violent people.

A majority of the white people I follow are embarrassed to be white. Lol. Can't blame them.

Tonight in Charleston will trigger a 2nd amendment debate. I offer a compromise. Let's just take away the white people's guns. That'll help.