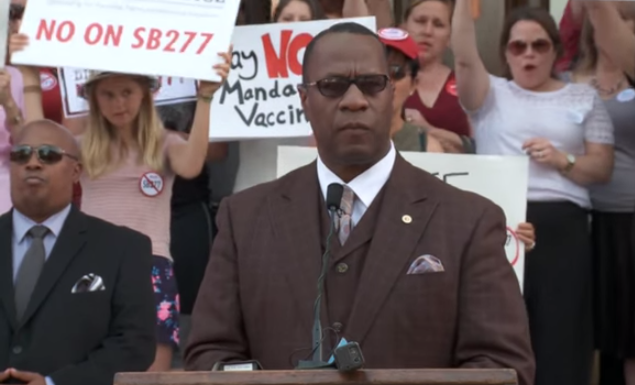 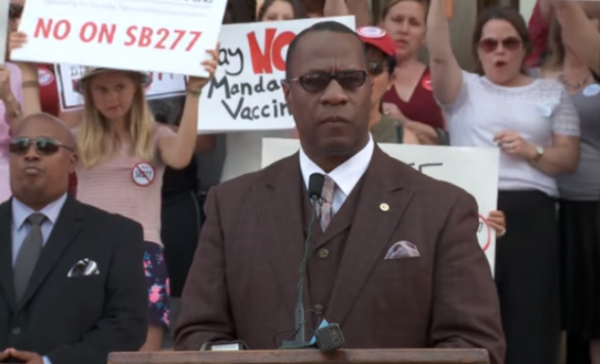 “This heinous bill…has now come to the attention of the black community.” Epic speech the mainstream wouldn’t cover!

During the months of December 2014 through April 2015, the media, with the backing of Big Pharma through every possible means, changed the entire paradigm surrounding vaccination. It was a forceful push to embrace injections like no other that even spread abroad in several countries like Australia. A gullible public has now been asked to do a corporation’s dirty work and point dehumanizing fingers and shame and suspicion at their neighbors and their neighbors’ children.

Big Pharma used every psy-weapon available to demonize opponents of forced vaccination bills like SB277 which would remove virtually all vaccine exemptions from California children. This psy-op is evidenced by the four top signs of astroturfing and media manipulation. They not only used typical witch hunt lingo and painted quite the narrative to demonize opponents of vaccination, forming a “debate” where there was none – debates usually include two willing parties and are not driven by one forceful entity – but also twisted it up by politicizing it into a left-right Punch and Judy show which created more confusing division.

Basically, the media tried to shame liberals and blame the middle-class educated crowd for causing disease outbreaks, even though California’s children are over 97% vaccinated. They magically drove the choice over one’s body into a Right issue and painted it as uneducated, stodgy and outdated. Then they pulled out the conservatives’ only known black idols – Drs. Ben Carson and Thomas Sowell (educated by the Pharma/Rockefeller-funded Hoover Institute) who both suddenly came out in glowing support of vaccines.

Louis Farrakhan and Tony Muhammad simply say No! They don’t pull punches by asking for a choice. They’ve drawn a line in the sand, especially since whistleblowers came out with information of covered up data showing that the MMR vaccine can create higher rates of autism among young black males. Farrakhan recently spoke with Robert F. Kennedy Jr. about vaccines and asked “Am I the only one?…” Meaning the only black man to speak out about forced vaccination as it applies to SB277.

But Tony’s epic under-the-radar speech shows more than just the long-awaited ire of the black community who don’t wish for another “Tuskegee experiment” – it shows that blacks and whites are not taking the division-bait. They are not being divided and conquered.

Last Tuesday, hundreds of rally members put aside all issues of race, creed and class to gather at California’s State Capitol in peaceful protest of the bill. Read more about it HERE. Note: Breitbart.com is heavily pushing the vaccine agenda, so when they reported on this story, they purposely and predictably put “Nation of Islam” in the title to create diversion and division. As you can see below, no one at the event had any qualms about the speakers. Hopefully, one can see that religion was not a focal point of this event, although Biblical scriptures were alluded to for analogy.

For blacks and whites to unify against mandatory vaccination – and scrutinize vaccination in general – is a serious threat to Big Pharma and the global agenda. How often has that type of focused demand even happened since Martin Luther King, Jr. nearly unified all classes and races of America and then the globe, against the motor behind the psychopathic oligarchy? Especially now with the race-obsessed headlines derailing people’s attention from the core issues up for discussion.

Among the political speakers was Minister Tony Muhammad, speaking on behalf of Farrakhan in this rousing speech:

Currently, the bill has been read a second time and ordered for a third reading, but it is expected to reach the Governor’s desk soon.

Please act now and don’t let the world’s second largest mega-corporation conglomerate (the first is the arms industry [war]) call the shots on children’s health and seal the deal for all the vaccines they have waiting in the pipeline.