Do you wish there was a fast and easy way to tell if one of the front running presidential candidates is a big fat phony? Well fret not, because such a method exists. All you have to do is run the name of their twitter account through twitteraudit.com, and find out how many of their followers are bots and shills. Obviously, if someone is willing to buy a bunch of fake followers, then they’re probably a pretty disingenuous person.

So how do the front running presidential candidates rank in terms of fake twitter followers? Vocativ.com ran their twitter accounts through the program, and compiled the data into the image you see below. Spoiler alert: Most of the candidates are pretty damn phony, and the worst offender didn’t come as a big surprise. 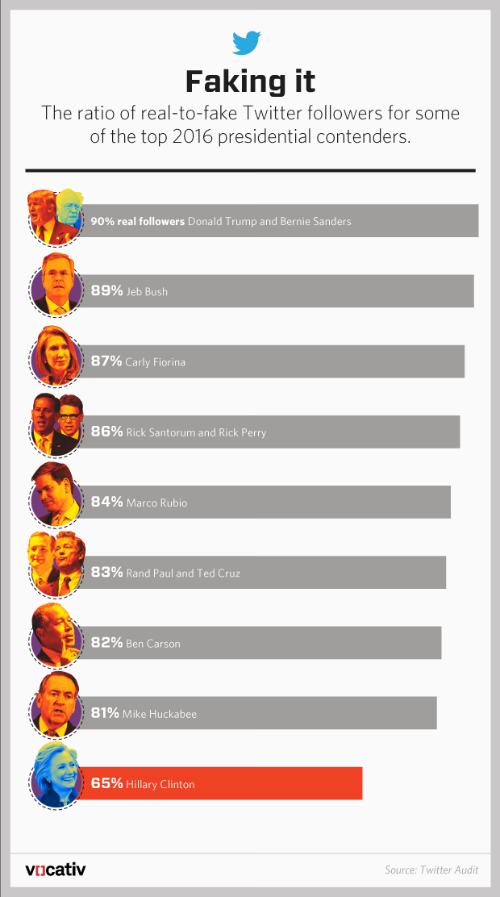 Granted, this method isn’t foolproof. I ran my twitter account through this program, and found a couple of fake followers, though I don’t recall ever deliberately putting them there. Every twitter account has a few, so it’s safe to assume that the candidates at the top of this list, while perhaps phony for other reasons, hiring fake twitter followers may not be one of them. As for the rest of these people, I can’t imagine how someone could accumulate hundreds of thousands of followers, with 15-35% of them being fake, unless that someone has long since abandoned all of their scruples.

Editor’s Note: @DCClothesline scored 93%, which is higher than any on the above list. The system looks for things like recent activity, so even if the users are real people, they are not particularly active with their Twitter accounts. Our readers are, at the very least, more active on Twitter. But 65%? Come on Hillary. I’d say Joshua Krause is on to something here. Look at the huge disparity. Does this remind anyone of Obama’s gun hating spambot scandal? -Dean