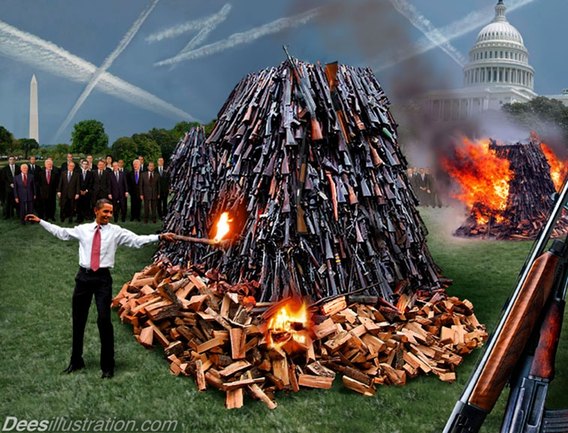 As anyone with two brain cells moving in the same direction would have been able to predict, President Barack Obama and his mouthpiece media outlets have already begun calling for more gun control in the wake of the Charleston, SC church shooting.

Before the corpses of the victims were fully cold, the local Charleston oligarchs, mainstream media, and then the President immediately took to blaming the atrocity on the availability of guns.

Even before the international disgrace known as Barack Obama was able to practice the speech provided for him by well-paid writers, corrupt Charleston Mayor Joe Riley launched into a tirade against gun ownership.

“I personally believe there are far too many guns out there, and access to guns, it’s far too easy. Our society has not been able to deal with that yet.”

In the coming days, Riley said he would “continue to push on” and called the killings this week “another example of why” more gun-control measures should be enacted.
Riley went on to criticize the “easy ability for people to gain possession of them no doubt contributes to violent acts.”

Later, Obama followed suit with his typical and well-worn oratory by stating,

“We don’t have all the facts, but we do know that once again, innocent people were killed in part because someone who wanted to inflict harm had no trouble getting their hand on a gun.”

“It is in our power to do something about it. I say that recognizing the politics in this town foreclose a lot of those avenues right now. But it’d be wrong for us not to acknowledge it, and at some point, it’s going to important for the American to come to grips with it and for us to be able to shift how we think about the issue of gun violence collectively.”

“Now is the time for mourning and for healing. But let’s be clear. At some point, we as a country will have to reckon with the fact that this type of mass violence does not happen in other advanced countries. It doesn’t happen in other places with this kind of frequency.”

In fact, the rhetoric of Riley and Obama as well as other politicians and media mouthpieces sounded so familiar that it almost sounds like a script….

At the very least, it certainly is a propaganda campaign picked up once again at a tasteless but opportune time for gun-grabbers.

This article will be far too short to address the overwhelming stupidity and falsehoods peddled by a President known for both. However, crocodile tears from a man who routinely orders the murder of children overseas – whether by drone or by terrorist – under the guise of protecting freedom, democracy, or innocent civilians from the very same terrorists his administration is supporting, is wholly unconvincing.

Typically, Obama describes the Sandy Hook shooting as one of the worst days of his Presidency, while simultaneous engaging in jokes about the drones he uses to kill children in Yemen, Pakistan, and other countries or bragging about the illegal and immoral murder of Muammar Ghaddaffi alongside cackling witch Hillary Clinton.

As for his claims that mass shootings do not happen in other countries, of course, he can easily be proven wrong. They do. And when they do, they are generally much more dramatic due to the disarmed nature of the public.

As for the increased frequency of mass shootings, it should also be mentioned that a high number of the mass shootings that Obama and the anti-gun campaign have piggybacked and taken advantage of in the last few years are questionable to say the least when it comes to their origins. One need only examine the facts surrounding the Sandy Hook shootings to see that the official story was untrue. (See here and here). In fact, the involvement of intelligence agencies is highly implicated in the Sandy Hook event as well as in a number of other shootings such as the Batman shooting. So, when trying to understand the reason behind the uptick in mass shootings, perhaps we should look at the Obama administration, US intelligence agencies, and other members of the US “deep state” before we look at Joe Bob in Texas.

Of course, whether or not the Charleston Church shooting is a staged provocation is yet to be determined. There are certain “coincidences” such as the fact that the race-based shooting occurred in a city where attempts to promote racial tension failed only months ago and that one of the victims was not only a prominent figure in South Carolina politics but also someone whom Obama actually claims he “knew.” However, there is not yet enough credible evidence to determine the true nature of the shootings. To declare the shooting a false flag, while certainly fitting with the track record of events, particularly in recent years, would be both premature and speculation at this point.

Given the history of the US government in these instances, one cannot rule such a possibility out. However, the possibility that this shooting was indeed a rogue psycho, probably encouraged by the relentless race-baiting and hate promotion of the media is also plausible. At this point, we will have to reserve judgement on the nature of the incident until further information is provided.

However, what is abundantly clear is that the US oligarchy is not letting a good crisis go to waste. No chance to disarm the American people will ever be missed.

In the meantime, it is important for those in Charleston to express compassion and provide comfort and assistance to their neighbors. But it is also the time to firmly resist any attempts at gun control and disarmament.