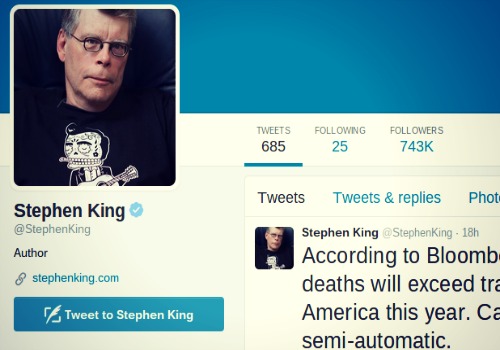 This Charleston shooting is already being manipulated in the media for every ounce of race baiting and gun control agenda it can squeeze out. Horror novelist Stephen King has readily jumped right on that bandwagon it seems…

King has had plenty to say about the closed minds of people who are against gun control.

In the wake of the Charleston shooting that left nine people dead at the hands of 21-year-old gunman Dylann Roof, who was reportedly on psychotropic medication at the time of the killings, King took to his Twitter account to denounce the “proudly closed minds” of people who are against gun control.

(In order, oldest to latest.)

According to Bloomberg Business, gun deaths will exceed traffic fatalities in America this year. Can't put a seatbelt on a semi-automatic.

Others would disagree with Mr. King.

@StephenKing If guns are responsible for killings then by that logic cars are to blame for traffic deaths.

Don't try guilt-tripping the "99%" for the actions of the less than "1%"; nobody will take your side seriously. @StephenKing

@StephenKing Doesn't Chicago have responsible gun control laws? How's that working out for them?

Dear @StephenKing: Does that include gun control for cops? They shoot and kill more than two people A DAY on average in this country…

Because law-abiding gun owners are the ones committing all the gun crimes? Because we all know laws against crimes stop crime, right? Because those laws would’ve stopped what happened in Charleston? Because it makes more sense for the government (and criminals who don’t follow laws or else they wouldn’t be called “criminals”) to have all the guns, leaving the rest of us defenseless? Because we don’t live in a country where our own police shoot and kill an average or more than two Americans a day?

Whose mind is really closed here?