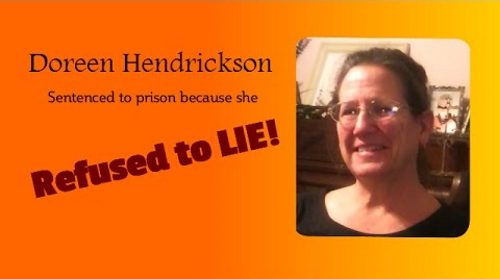 The late Andrew Russo is famous for his documentary Freedom to Fascism, which you can view here. In the documentary, he exposes the Internal Revenues tactics to force people to pay income tax, even getting an interview with the former head of the IRS, who was unable to cite the law that requires US citizens to fill out a tax return. Now, a citizen video and book are looking to set the record straight and inform the public for the sake of making real change in the tax system. Keep in mind as you read the article that this is not just about the IRS and tax returns. It’s also about the First Amendment.

On July 25, 2014, Doreen Hendrickson was convicted of contempt of court. She was recently sentenced to 18 months, and surrendered herself to prison on May 15, 2015. The details of the case were bizarre, to say the least.

Doreen’s husband, Pete Hendrickson, is the author of Cracking the Code: The Fascinating Truth about Taxation in America, a book that encourages an allegedly legal but unconventional way of filing tax returns, which has supposedly helped tens of thousands of readers win their money back from the IRS. While the book and documentary goes into much heavier detail, the compact of his premise is that the income tax was only meant to be applied to government employees, and private citizens can avoid income taxation by referencing this distinction.

Doreen and Pete have been using this method to avoid paying income tax since the release of Pete’s book, and it’s put them at odds with the IRS. In the recent case, Doreen was given a new set of returns filled out by the federal government and ordered to sign them as being her own testimony. Because they were not her own words, she refused, and has now been sentenced to prison.

Here’s the problem in all of this, Mrs. Hendrickson was not charged with tax evasion nor was she charged with falsifying her tax returns. She was charged with contempt of court because she would not sign a document that she did not believe to be true.

“I am accused by the government of having committed a crime for refusing to obey an order to swear to facts I do not believe are true,” said Hendrickson. “I agreed to obey the order if I could also simply add to my signature that I had been ordered by a judge to swear to the facts. That didn’t suit the government however. Not only must I obey an order to swear to something I do not believe, but I am not allowed to indicate that I’ve been ordered to swear under threat of imprisonment.”

Of course, people in the united States have been paying taxes and filling out income tax returns for decades now. Surely, there must be a law someone can point to that requires American citizens to provide such returns. So far no law is in place.

Peter Hendrickson wrote, “The limited nature of the income tax is not a matter of my opinion. In addition to the clear words of the law, dozens of United States Supreme Court rulings agree with my research and analysis, while no Supreme Court rulings support any alternative view, including the broad misunderstanding of the law the IRS likes to encourage.”

Hendrickson also said that his wife was not allowed to reference Supreme Court cases to demonstrate her innocence before a jury of her peers. The judge even taunted her during her opening statement.

In writing about Hendrickson’s case in a book titled Motor City Witchcraft Trials, court-watcher, Brian Wright, wrote, “The current lot of judges at all levels has deteriorated into yes men to whatever mobster, especially federal with DHS and the national security state apparatus, tells them to dance.”

Now, a new documentary by Ford Fisher and Shane Trejo seeks to expose the corruption of the IRS, the limited nature of “income” tax and the attacks of the First Amendment. The video highlights the now infamous IRS v. Hendrickson case. View it below and share it with your friends on social media.

Finally, keep in mind that this is the same corrupt cartel that continues to target the political opponents of the current criminal administration.