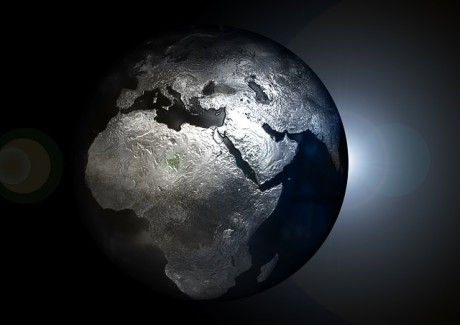 As we move toward the second half of 2015, signs of financial turmoil are appearing all over the globe.  In Greece, a full blown bank run is happening right now.  Approximately 2 billion euros were pulled out of Greek banks in just the past three days, Barclays says that capital controls are “imminent” unless a debt deal is struck, and there are reports that preparations are being made for a “bank holiday” in Greece.  Meanwhile, Chinese stocks are absolutely crashing.  The Shanghai Composite Index was down more than 13 percent this week alone.  That was the largest one week decline since the collapse of Lehman Brothers.  In the U.S., stocks aren’t crashing yet, but we just witnessed one of the largest one week outflows of capital from the bond markets that we have ever witnessed.  Slowly but surely, we are starting to see the smart money head for the exits.  As one Swedish fund manager put it recently, everyone wants “to avoid being caught on the wrong side of markets once the herd realizes stocks are over-valued“.

I don’t think that most people understand how serious things have gotten already.  In Greece, so much money has been pulled out of the banks that the European Central Bank admits that Greek banks may not be able to open on Monday…

The European Central Bank told a meeting of euro zone finance ministers on Thursday that it was not sure if Greek banks, which have been suffering large daily deposit outflows, would be able to open on Monday, officials with knowledge of the talks said.

Greek savers have withdrawn about 2 billion euros from banks over the past three days, with outflows accelerating rapidly since talks between the government and its creditors collapsed at the weekend, banking sources told Reuters.

All over social media, people are sharing photos of long lines at Greek ATMs as ordinary citizens rush to get their cash out of the troubled banks.  Here is one example…

Long queues at ATM's all around Athens center. #Greece pic.twitter.com/k4wgerQ7gP

And if there is no debt deal by the end of this month, the Greek debt crisis is going to totally spin out of control and financial chaos will begin to erupt all over Europe.  But instead of trying to be reasonable, EU president Donald Tusk “has delivered an ultimatum to Greece”, and it almost appears as if EU officials are more concerned about winning a power struggle than they are about averting financial catastrophe…

EU president Donald Tusk has delivered an ultimatum to Greece, claiming the country must ‘accept an offer or default’ at an emergency summit set for Monday – in a last-ditch effort to stop the debt-stricken nation crashing out of the euro.

‘We are close to the point where the Greek government will have to choose between accepting what I believe is a good offer of continued support or to head towards default,’ Mr Tusk said today.

His comments come as Greek Prime Minister Alexis Tsipras warned that his country’s exit from the eurozone would trigger the collapse of the single currency.

‘The famous Grexit cannot be an option either for the Greeks or the European Union,’ he said in an Austrian newspaper interview.

‘This would be an irreversible step, it would be the beginning of the end of the eurozone.’

While all of this has been going on, the obscene stock market bubble in China has started to implode.  Just check out the following numbers from Zero Hedge…

As the carnage began last night in China we noted the extreme levels of volatility the major indices had experienced in recent weeks. By the close, things were ugly with the broad Shanghai Composite down a stunning 13.3% on the week – the most since Lehman in 2008 (with Shenzhen slightly better at down 12.8% and CHINEXT down a record-breaking 14.99%).

Under normal circumstances, numbers like these would be reason for a full-blown financial panic over in Asia.  But these are not normal times.  Even with these losses, stock prices in China are still massively overinflated.  For example, USA Today is reporting that the median stock over in China is “trading at 95 times earnings”…

Margin debt in China has soared to a record $363 billion, according to Bloomberg, and the median stock in mainland China is now trading at 95 times earnings, which even tops the price-to-earnings multiple of 68 back at the 2007 peak.

That is absolutely ridiculous.  When a stock is trading at 25 or 30 times earnings it is overpriced.  So these numbers that are coming out of China are beyond crazy, and what this means is that Chinese stocks have much, much farther to fall before they get back to any semblance of reality.

Meanwhile, in the U.S. money is flowing out of bonds at a staggering pace.  The following quote originally comes from Bank of America…

“High grade credit funds suffered their biggest outflow this year, and double the previous week (and also the biggest since June 2013). High yield outflows also jumped to $1.1bn, the biggest since the start of the year. However, government bond funds suffered the most amid the recent spike in volatility, with outflows surging to the highest weekly number on record($2.7bn). This brings the total outflow from fixed income funds to almost $6bn over the last week, the highest since the Taper Tantrum and the third highest outflow ever.”

What this means is that big trouble is brewing in the bond markets.  This is something that I warned about in my previous article entitled “Experts Are Warning That The 76 Trillion Dollar Global Bond Bubble Is About To Explode“.

For the moment, U.S. stocks are doing fine.  But just about everyone can see that we in a massive financial bubble that could burst at any time.  Presidential candidate Donald Trump says that what we are witnessing is a “big fat economic and financial bubble like you’ve never seen before”…

Yesterday during an interview on MSNBC, presidential candidate Donald Trump said he has some big names in mind for the Treasury secretary if he wins the White House. “I’d like guys like Jack Welch. I like guys like Henry Kravis. I’d love to bring my friend Carl Icahn.” He also opined on the economy and the stock market, admitting that the Fed has benefited people like him but that the economy and is in a “big fat economic and financial bubble like you’ve never seen before.“

Ron Paul also believes that this financial bubble is going to end very badly.  Just check out what he told CNBC earlier this week…

Despite record highs in the market, former Rep. Ron Paul says the Fed’s easy money policies have left stocks and bonds are on the verge of a massive collapse.

“I am utterly amazed at how the Federal Reserve can play havoc with the market,” Paul said on CNBC’s “Futures Now” referring to Thursday’s surge in stocks. The S&P 500 closed less than 1 percent off its all-time high. “I look at it as being very unstable.”

In Paul’s eyes, “the fallacy of economic planning” has created such a “horrendous bubble” in the bond market that it’s only a matter of time before the bottom falls out. And when it does, it will lead to “stock market chaos.”

Yes, this financial bubble has persisted far longer than many believed possible, but all irrational bubbles eventually burst.

And you know what they say – the bigger they come the harder they fall.