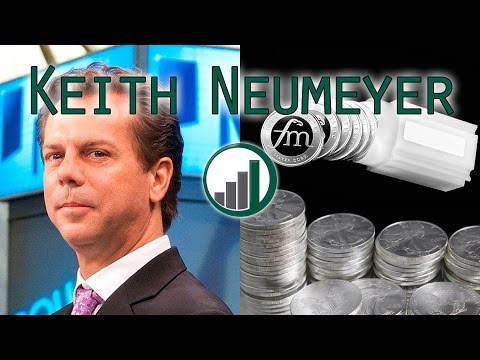 Over the last several months there have been numerous reports highlighting the frantic activities of the world’s ultra-wealthy elite. From the purchasing of emergency hideaways and airstrips to warnings from their financial advisers that it’s time to shift their assets into physical holdings, it appears that a lot of powerful people are afraid of a significant shift set to take place in the near future.

In his latest interview with Future Money Trends Keith Neumeyer, who recently penned a very public (and very viral) letter to the Commodity Futures Trading Commissions outlining the rampant manipulation by concentrations of shadowy market players taking place on commodities exchanges, shares his insights on what many believe to be a coming global reset.

According to First Mining Finance Chairman Neumeyer, the day of reckoning may come a lot sooner than most people think:

It’s in the cards for sure. Predicting exactly what it’s going to mean or what it’s going to look like… that’s the big challenge… I think a lot of people are ignoring it… but there are some forward thinkers out there who talk about it.

I think that the Chinese want their currency part of a floating currency… I think that’s really going to be the next leg in this whole change… in this reset going forward. It could even happen this year.

When this reset comes to pass the manipulations so apparent in commodities and broader stock markets today will be exposed, and according to Neumeyer, may lead to the biggest surge in precious metals we have ever seen.

Echoing the forecasts of one of the world’s leading trend strategists Gerald Celente, Neumeyer notes that the monetary system that takes hold after a global reset could result in gold rising to $3000 an ounce or more. Such a move would have a similar impact on silver, which may stabilize at it’s historical silver-to-gold ratio of 16:1, putting it’s strike price somewhere above $150 an ounce.

The other key ratio is the ratio that has been common for 500 years… Sir Isaac Newton came up with the ratio of 16-to-1 and that’s how they created the pound sterling. And so there was a theory that there was for every one ounce of gold, 16 ounces of silver in the earth’s crust. So using 16-to-1, at $1,200, it’s somewhere around $80-$90.

The prices Neumeyer cites are based on current trading levels, suggesting that silver is significantly under-priced already.

Now imagine what happens should we see a widespread crisis and subsequent global reset of the financial, economic and monetary systems. Markets are so fragile that even something as simple as China publicly declaring their true gold holdings could spark the next bull run in precious metals:

Of course it would and that plays back to what I was saying earlier. I don’t know if China’s ready for that to happen, because once they do it gold will probably go up by multiples… hundreds and hundreds of dollars.

Who knows exactly… but I do believe that that would occur because the people would see the hoard that the Chinese have actually accumulated over the last decade and that would completely change the market.

Countries like China and Russia are secretly accumulating massive stockpiles of gold and silver. Further, the ultra-wealthy have been warned in no uncertain terms by their advisers to do the same.

If there were ever a tell-tale sign that a momentous set of events is soon to take place, this is it. Follow the money, which at this time just so happens to be shifting to physical assets of real value in anticipation of the next leg of the global reset.