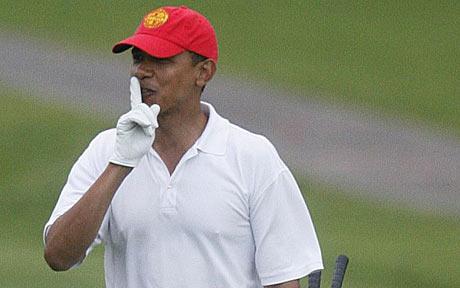 As Charlestonians continue to deal with the tragic murder of nine innocent people, Americans stand at the precipice of crushing austerity and economic collapse, and the US military continues to fight wars raging overseas, Obama is now doing what any bold and courageous leader in his situation would do – he is taking a vacation.

Shortly after giving a rousing (albeit wholly unconvincing) speech about how guns and their availability are the cause of mass shootings (as opposed to American police who have killed more Americans in 2014 than all mass shootings in American history combined or US intelligence agencies via false flag operations), Obama took off to the Coachella Valley in California to enjoy some of the most pristine golf courses available to the US ruling class – in the midst of a terrifying and massive drought no less!

In response to the drought, California Governor Jerry Brown has called for a 25% reduction in the use of potable water. In Coachella specifically, the area was called on to reduce water usage by 36% due to its higher per capita use of water resources. But this is no matter for the US President or water authorities. When the public face of the US oligarchy wants to play golf, the public face of the US oligarchy plays golf.

Apparently, Obama was so exhausted from his brief stint pretending to act as President that he needed yet another vacation to buttress his time at work.

Of course, taking as many vacation days as one has worked may be a foreign concept to the average American who is lucky to receive any paid vacation at all, but the American working (and not working) class cannot be expected to live the life of leisure carefully prepared for “special” people and “brilliant” minds like those of Corporate heads, bankers, and government officials.

With Obama’s new vacation, it appears that his recent statement that he was “tired of giving these types of speeches” after the Charleston Church shooting was more literal than Americans may have guessed.

While Obama and his Royal (*ahem) Presidential family’s vacations are nowhere near the most concerning issue facing America today, it is worth pointing out what the real significance of these public vacations and displays of unrestrained shopping sprees and events might be. Namely, that two classes of people that have existed since the beginning of the country – the rich and the poor – are now becoming more pronounced.

With the middle class in America almost completely eliminated, the ranks of the poor and the working poor are swelling while the ranks of the oligarchical and aristocratic class become more and more opulent. Unfortunately, Americans have had plenty of Hollywood propaganda that prevents them from becoming insulted or angry at the ruling class enjoying piles of food at beautifully decorated dinner tables while they are scraping crumbs from a plastic saucer.

Instead, Americans have been successfully trained to admire wealth and opulence. Despite the fact that they are poor, they have been trained to despise their own classes. The middle classes that do currently remain are quite content to enjoy the financial benefit over the poor for so long as it lasts. After all, they might not be rich, but at least they are not poor and everyone needs someone to look down on.

What little class consciousness that does exist is siphoned off into the false idea that the economic problems facing Americans is merely one of distribution and thus we must be forced to come up with new ways of taking from members of the general public to give to other members of the general public and, if we do this well enough, the problem will be solved. But the crisis is not just one of distribution, it is a matter of production.

The demands for any movement seeking to change the state of affairs in which the overwhelming majority of the American population now finds itself in already exist. All that is necessary is that those willing to take part in a mass strike upsurge grasp the wheel and begin to drive the machine in the right direction.

The promotion of the existence of the American ruling class – now more visible in the minds of the general public than ever – should not be a sign of defeat for those on the bottom rungs of society, it should be a sign of anger. It should be a metaphorical call to arms.