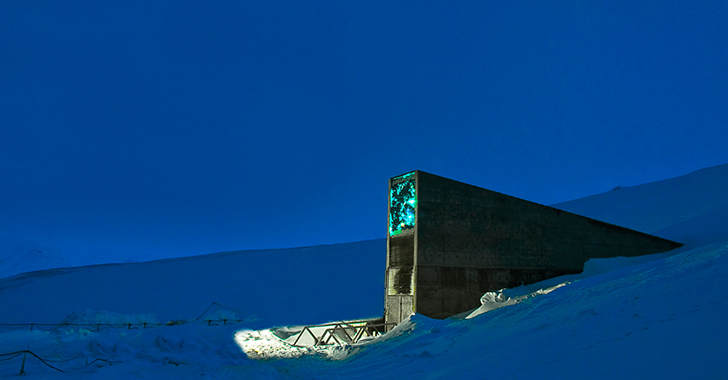 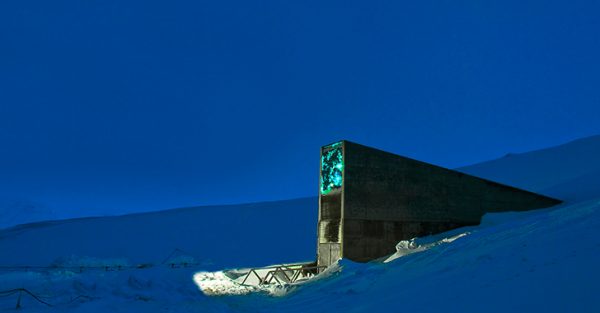 A new documentary called The Seeds of Time is bringing the mythic “Doomsday Vault” of Norway back into the limelight. If you have heard of the Svalbard Global Seed Vault, it has likely been either in the context of a conspiracy theory or some cryptic reference in a science journal.

The facts alone make the “Vault” sound like it was taken out of a James Bond movie: 130 meters up in the glacial mountains of Norway, there is a disaster-proof, permafrost-insulated seed bank depository that, in the event of an apocalyptic event, could repopulate the Earth with virtually every known crop. Jutting out of the ice with a glowing fiber-optic display, the entrance of the Svalbard vault immediately conjures visions of a vast underground military installation.

The reality of what’s going on is a bit less dramatic, yet somehow more unnerving and awe-inspiring.

The Svalbard Global Seed Vault has been in service for over six years, but the public remains mystified by the project. Buried under the permafrost of Norway, the vault is now home to over 500,000 samples of crop germplasms. Originally conceived in the 1980s as a 100-year experiment to test the durability of seeds in cold environments, the project struggled to find donors—that is, until an eyebrow-raising team of behemoths–including the Bill Gates Foundation, the Rockefeller Foundation, Monsanto, and Syngenta–decided to invest. And they invested big: the Bill Gates Foundation alone has poured in $30 million.

Conspiracy theorists have speculated that the agricultural bank is related to knowledge of an impending apocalypse. With the two most reviled Big Agro corporations on the planet involved, this is not surprising—nor is it particularly stunning that some conspiracy theorists regard the vault as yet another indicator that Bill Gates has a depopulation plan in mind.

Conspiracy theories aside, the new documentary does confirm that though apocalypse readiness was not one of the intended functions of the “Doomsday Vault,” it has become an inadvertent utility. According to Cary Fowler, who from 2005-2012 served as executive director of the Global Crop Diversity Trust (which helped create the Svalbard vault), the ostensible goal of this system is to preserve crop diversity in regions plagued by war and civil turmoil:

“There isn’t an endgame. There will always be new diversity. The story never ends.”

The so-called “Doomsday Vault” is owned and operated by Norway, however, the Norwegian government has no access to the content of any deposits, which are kept in a chamber with a strictly maintained temperature of -18C. They are heftily barricaded to stave off cross-contamination.

Seeds are the only materials stored in these boxes—they are not shared or aggregated in any way. Each unit is strictly isolated to maintain exclusive access for the national account holder. According to The Guardian,

“North Korea’s rough wooden crates sit next door to deposits from the US, Russia’s contributions on top of Ukraine’s…”

Norway is supposedly providing this service for the benefit of the entire planet by providing the ability revive essential food crops in the event of some globe-threatening disaster, a particularly virulent disease, drought, or nuclear war, for example.

Fowler speculated on the future:

“I hope [countries] never use Svalbard. It’s an insurance policy. Like car or home insurance, the hope is you never have to use it. Unfortunately, if we need to go to Svalbard it means we suffered losses in the working gene banks.”

She said climate change could present a major challenge:

“I do worry that while we have really big collections for the top 15 major crops, we’re deficient in the rest. That doesn’t bode well in an era of climate change, where we need to use that diversity to adapt our crops.”

Clearly, the stated goal of the Svalbard Seed Vault is long-term sustainability of seed genes and the human population, which by 2100 will have ballooned to an eye-popping 11 billion. That’s why the Crop Trust isn’t done asking for money. It is reaching out to even more national governments, foundations, and agribusiness titans with a goal of raising $850 million.

It has a pretty good start on that number, which beckons one to follow the money. As previously stated, it leads to four of the most polarizing groups in the world. You could fill a library with the conspiracy theories generated around Bill Gates, the Rockefellers, Monsanto, and Syngenta. It makes you wonder what might have been left out of this documentary. After all, where there’s an insurance policy, there’s usually an industry hedging against expected losses.