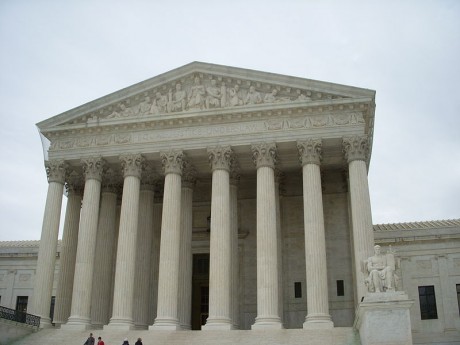 Thanks to the Supreme Court’s willingness to make stuff up, Obamacare has been saved once again.  In order to save Obamacare from utter disaster, Chief Justice Roberts essentially rewrote the law.  If you are thinking that the Supreme Court is not supposed to do that, you would be right.  But this is what our judicial system has devolved into.  When I was in law school, I was horrified to discover that most judges in our country just do whatever they feel like doing.  Instead of applying the law to the facts and coming to a fair and unbiased judgment, most judges in America just do whatever they want to do and then search for some law or case precedent that they can use to justify their decision.  If there is no law or case precedent, some federal judges even go outside of the country to find justification for their absolutely ridiculous rulings.  There have been instances where international law or international standards of morality have been cited as authority for a decision in a federal case.  We have become a lawless land where the letter of the law no longer holds any real meaning, and where tyrannical judges just make stuff up out of thin air in order to advance their own personal political agendas.

This decision on Obamacare should have been quite straightforward for the court.  The following is how Business Insider described the key issue in this case…

In his dissent, Justice Antonin Scalia scolded the court for discarding all usual rules of interpretation in order to preserve Obamacare…

To say that Scalia was upset by this decision would be a massive understatement.  He says that this ridiculous decision will be “remembered through the years” and that it sends a message that “the Supreme Court of the United States favors some laws over others, and is prepared to do whatever it takes to uphold and assist its favorites”…

“But this Court’s two decisions on the Act will surely be remembered through the years. The somersaults of statutory interpretation they have performed (‘penalty’ means tax, ‘further [Medicaid] payments to the State’ means only incremental Medicaid payments to the State, ‘established by the State’ means not established by the State) will be cited by litigants endlessly, to the confusion of honest jurisprudence. And the cases will publish forever the discouraging truth that the Supreme Court of the United States favors some laws over others, and is prepared to do whatever it takes to uphold and assist its favorites.”

Near the end of his dissent, he chided his fellow justices for rewriting Obamacare in order to save it, and he suggested that this law should now be referred to as “SCOTUScare”…

“This Court revised major components of the statute in order to save them from unconstitutionality.… We should start calling this law SCOTUScare.”

Normally, at the end of a dissenting opinion it is traditional for a Supreme Court justice to state “I respectfully dissent”.

But this time, Scalia simply ended with “I dissent”.

That may not seem like much to you, but in the legal world that is extremely significant.

Of course Obama was absolutely thrilled by this Obamacare decision.  The following comes from CBS News…

President Obama commended a Supreme Court ruling that upheld a major portion of the Affordable Care Act on Thursday, hailing the decision as a vindication of his push for health care reform – and a clear signal to the law’s opponents that it’s time to give up the ghost.

“As the dust has settled, there can be no doubt this law is working,” the president said in a brief speech from the White House Rose Garden. “After multiple challenges to this law before the Supreme Court, the Affordable Care Act is here to stay. This morning, the court upheld a critical part of this law – the part that’s made it easier for Americans to afford health insurance no matter where you live.”

This all makes me very sad.  Our law schools have become indoctrination centers for progressivism.  Our law students are being taught that the U.S. Constitution is a “living, breathing document” and that courts should determine what the best end result of a case should be and then figure out the best way to justify that decision.

Our law schools are some of the most liberal institutions in the entire country.  This is true even in the most “conservative” states.  Over the past several decades, graduates of these law schools have flooded the legal system and now dominate the judiciary on every level.

Yes, we can elect a new president and many new members of Congress in 2016, but changing the judiciary would literally take generations to accomplish.  That is why so many prominent voices are increasingly speaking out about “the tyranny of the judiciary”.  We have hordes of activist judges running around doing pretty much anything that they feel like doing.  It truly is a national crisis.

On a day to day basis, Barack Obama and Congress get a tremendous amount of criticism (and rightly so), but our judicial branch is also deeply, deeply corrupt and it would be much, much harder to fix.

Over the next few days, several more very important Supreme Court decisions will be announced.  And without a doubt, we should expect to see the “justices” continue to make stuff up out of thin air.

If our founding fathers could see what was happened to the Supreme Court that they created, they would be rolling over in their graves.