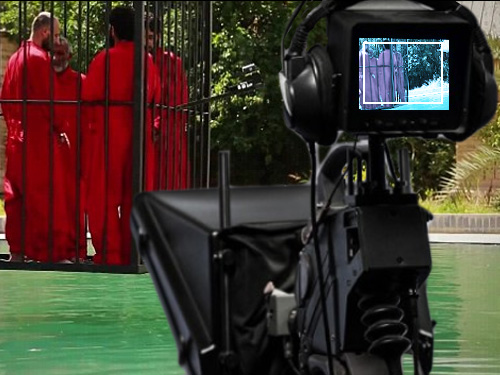 Yes, the war on terror was designed as a nebulous pile of dung that was never meant to ever end. You can’t win a war against an ideal.

And apparently now this war is being fought with show business… because that’s what war is.

Someone somewhere who cannot distinguish between what they see on television and what happens in real life is going to say the following is a heartless, disgusting article to write.

However, we live in a heartless, disgusting world where modern propaganda, false flags, and psyops have gotten to the point that they look like they are being directed by Michael Bay.

As if the videos of some of the so-called ISIS beheadings weren’t questionable enough. As if the news media reporting that ISIS is luring Western women into their dark nightmare world with Nutella and kittens wasn’t ridiculous enough.

Now we are given this.

Just read this Daily Mail headline. Read it twice before continuing and just let it sink in. 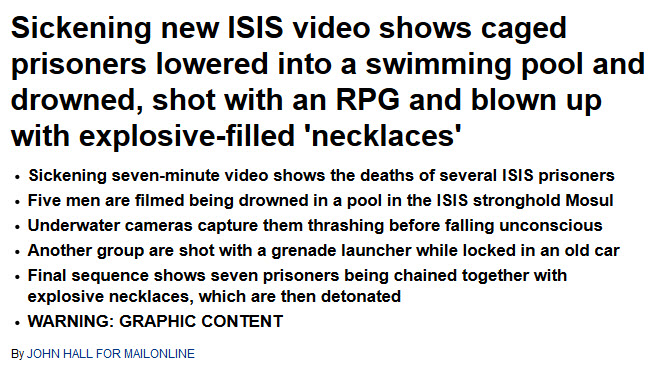 Admit it: if you read that anywhere else, it’d be on the back of a DVD case or in a comic book, not in real life.

Now we are being told that ISIS is drowning prisoners in sophisticated cage rigs like a Vegas magic show, AND shooting carfulls of prisoners with grenade launchers while filming it from a distance, AND putting rows of prisoners together with explosive “necklaces” which blow their heads off.

Are they really just organically coming up with this stuff? It sounds like a grisly version of the TV show Jackass mixed with the TV show Fear Factory.

It sounds like a lot of things, but it doesn’t sound real.

Look at these images and captions: 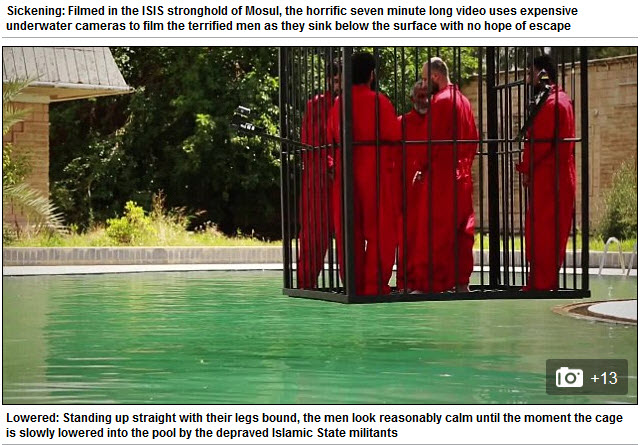 So ISIS somehow has time to build a sophisticated cage rig that can hold five men with a crane device over a pool like a bad guy in an Austin Powers movie? Are there sharks with freakin’ laser beams attached to their heads?

Also, read the caption. The men look “reasonably calm”? They are in a crazy death cage and were put there by mad terrorists! Aren’t they about to be put to their untimely deaths via drowning in a cage like the movie Indiana Jones and the Temple of Doom where the cult lowers people into lava? 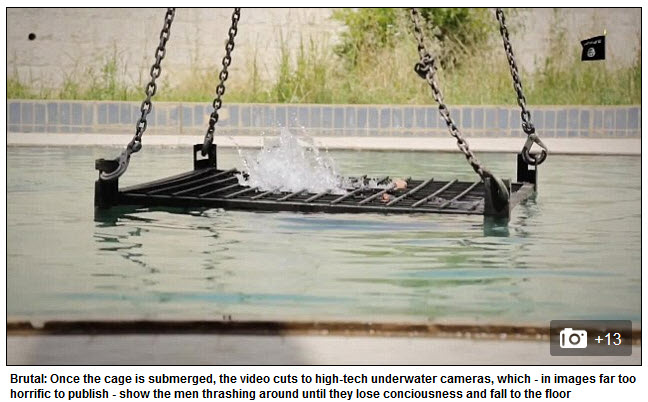 Okay, this is where the men are supposedly about to drown, which if true, is absolutely horrifying.

But please, before you get upset, just take a moment and read the caption!!

Once the cage is submerged, the video cuts to high-tech underwater cameras…

They cut to a multiple high-tech underwater camera set up?

Seriously, are these terrorists or what? When did they take the time out from raping and pillaging Iraq and the Syrian countryside to build this torture cage rig and THEN go buy multiple “high-tech underwater cameras” and set all those up in a sophisticated manner underwater in order to be able to cut to them in the first place?

And who is editing ISIS horror videos, by the way? Who is their cinematographer? Was that guy lured in with Nutella and kittens, too? Video editing is not at all a quick process. Are we really supposed to believe that guy is just taking time out chilling at a computer in a quiet studio in a war torn, terror-ravaged country to film and edit movies like this?

Then, in the SAME video, they blow some people up from far away in a car with a grenade launcher: 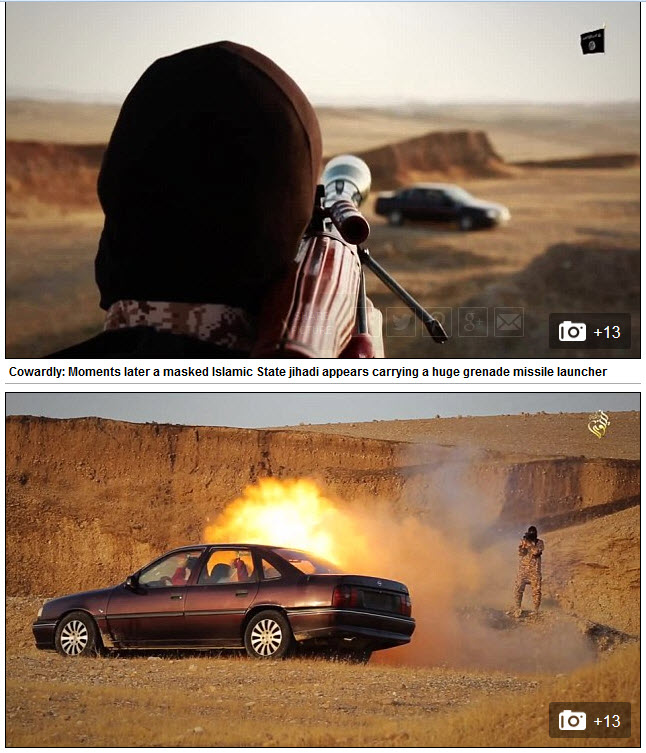 And THEN, because they aren’t done yet with this sick circus, we are told they made a string of prisoners wear explosive necklaces and they blew all their heads up. 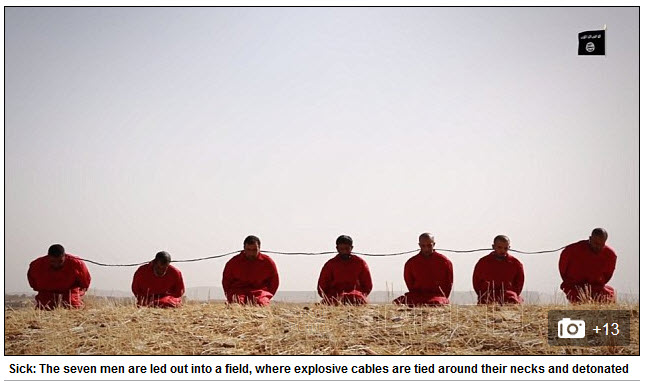 Is Stewey from Family Guy the leader of ISIS?

On a sidebar and on top of everything else we’ve already been told, the Daily Mail also notes that: 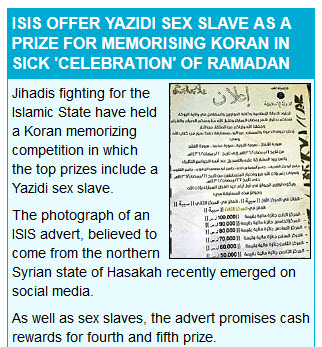 It’s just… way too much.

The only thing they didn’t do here is take one of the women they gave Nutella and kittens to and tie her to the train tracks 1920s-style, then film her getting run over by a steaming locomotive while one of the ISIS terrorists giggles wickedly and strokes his Captain Hook villain mustache.

The barbaric video is a new low for the terror group, whose catalogue of horrific filmed murders includes the savage beheading of several British and American hostages, the burning to death of Jordanian pilot Moaz al-Kasasbeh and numerous clips of people being shot and stoned to death.

A barbaric “new low”? Really? It even sounds like the tagline for the movie trailer!

More like an over-the-top Wag The Dog meets the movie Videodrome.

Just read the Daily Mail comments… if those are even real people commenting.

This whole thing doesn’t even seem to be about terror anymore. It’s like ISIS has transcended to cartoon villain status, getting more and more ridiculous and over-the-top all the time, seemingly so that Westerners will continue to buy it and demand even more war to stop ISIS.

As if, by now, they couldn’t have stopped these people if they really wanted to. Come on.

We live in an era of drones, directed energy weapons, and a massive surveillance apparatus for one thing.

Secondly, these guys are in the same place long enough to build sophisticated Vegas magic show movie sets at swimming pools and apparently purchase a ton of orange jump suits, high-tech underwater cameras, cage parts, cranes and all the other stage props and gizmos needed to pull off these dazzling propaganda horror films.

Meanwhile, we live in a world where our purchases are so tracked these days that if you go to your local grocery store and buy ice cream on sale, they’ll trace you via your digital data and the store will mail you coupons for more ice cream.

And yet, somehow, no one can seem to trace, track, and stop these guys based on the Hollywood scale of their purchases alone???

If you haven’t seen Wag The Dog lately, you really should watch it again… although, if you are watching ISIS videos these days, you have already seen it lately.

Stanley Motss: I’m in show business, yes? Why come to me?

Brean: ‘Tippecanoe and Tyler Too’!

Brean: They’re war slogans, Mr. Motss. We remember the slogans, we can’t even remember the f*cking wars. You know why? That’s show business. That’s why we’re here. Naked girl covered in Napalm. ‘V for Victory’. Five Marines raising the flag, Mt. Suribachi. You remember the picture 50 years from now, you’ll have forgotten the war. The Gulf War, smart bomb falling down a chimney. 2500 missions a day, 100 days. ONE video of ONE bomb, Mr. Motts, the American people bought that war. War is show business — that’s why we’re here.