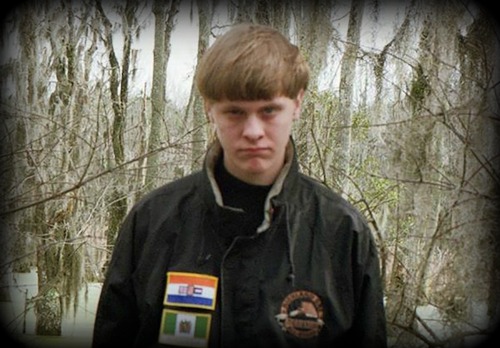 On June 18, Dylann Roof was arrested for killing nine people in a mass shooting at a black church in South Carolina.

Why did Quangel pony up the $49 to buy the website domain report?

Jacob Siegel of The Daily Beast asked her that question:

After I congratulated her for her investigative work, Quangel told me that she saw it as her duty. “As a communist,” Quangel said, “it is my duty and obligation to spend at least $49 to help ruin this guy’s insanity plea.”

But who IS Emma Quangel?

Scott Creighton, owner of the website American Everyman, did some digging and uncovered some information on Quangel:

Dylann Storm Roof’s unsigned “Confession Website” has been “found” by an Obama agenda supporter and a writer who wrote these items:

“Caroline Benjie is a naïve Candide come to the big city to find a life and career, like everyone else, through promotion via social media.” Emma Quangel on her book “Spooks”

“Caroline (author’s representation of herself as protagonist?) finds herself rising through the ranks of New York society (where Emma lives), feted and showered with gifts and endless praise of her excellence. Is Empire a wonderful meritocracy after all, and is the insipid and unimaginative Caroline really the superior specimen of the species as she herself is increasingly convinced? Or is she a pawn chosen for her vanity and gullibility, a mere puppet in a spectacle behind which there are larger and by no means random forces at work? Is she delivering revolution to the people or is she selling the people bound hand and foot — and strapped to electrical prods — to her many anonymous sponsors?” Emma Quangel on her book “Spooks”

Oh, by the way…Quangel owns a site called…wait for it…

And it looks like she and Henry go way back. His current Twitter handle is “Henry Krinkle,” but there are comments on Quangel’s blog from as far back as 2011 from a Henry Krunkle. Could it be that she has two buddies with VERY similar pseudonyms? Perhaps…but I doubt it.

Was this some kind of publicity stunt to promote Quangel’s book?

@EMQuangel so this was all a publicitty stunt for your book. Clevah. You are the guerilla marketer of the week.

And some are saying that Last Rhodesian didn’t even exist until AFTER Roof was arrested.

people are arguing that the site was a hoax because the wayback machine only indexed it today. they don't understand how wayback works.

@HenryKrinkIe google would have indexed with that much rich text, which intern would have been archived.

@HenryKrinkIe I've put sites up with far less, and google sniffed them out.

I searched the history for the Last Rhodesian website and found this: 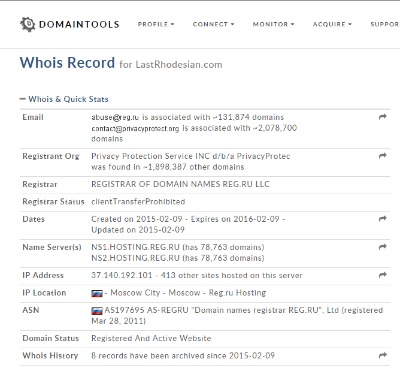 Notice the IP location is in Russia.

To verify that, I checked the IP address on another site: 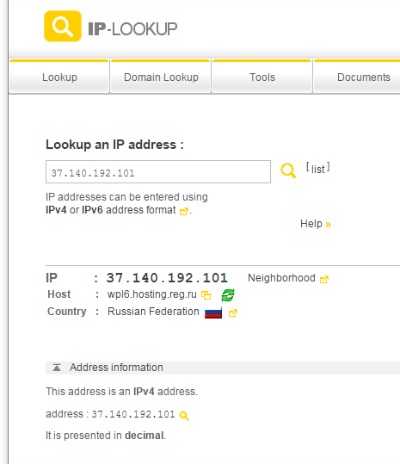 Of course, the fact that the site is hosted in Russia doesn’t necessarily mean anything.

You’ll notice that the site was created in February 2015, but internet archives only go as far back as June 20, 2015.

Creighton offers a possible explanation for that:

The New York Times states that the site was created on Feb. 2 of this year and immediately set with a privacy option that would keep people from being able to tell who created it. Considering the fact that the only posting on it is his “confession manifesto” which appears to have been written the same day as the shooting, and considering the nature of all the photos on it, it’s safe to say it was created for the sole purpose of implicating Dylann Storm Roof in this crime.

He also speculates that it is possible that Roof’s manifesto was actually written by Quangel:

I’m not going to go so far as to say Emma Quangel wrote the “confession manifesto” like are. I will say it’s more likely that she wrote it than Dylann did with his 9th grade education. You can go to the links I provided for you and read her work and then read the “manifesto” below to see if you think they were penned by the same person. Seems possible to me.

Creighton explains a bit more about what he found during his research into Roof’s alleged website:

Dylann’s supposed site has been taken down, but a cashed version of his manifesto still exists for you to read. I saw it briefly yesterday the last day it was edited was on Wed. June 17th, the same day as the shooting.

You will notice when you read it, not only is it unsigned and apparently created on the day of the event, but it also seems obvious that it was written by someone with a higher degree of education than 9th grade drop-out Dylann Roof would possess.

Aside from the unsigned “confession” from someone who is supposed to be Dylann Roof, the only other thing on the site are a few photos of Dylann which look extremely staged, with him holding a gun and in a couple of them, a confederate flag. They also seem to have all been taken the same night at the same location (but I confess, I may not have seen all of them)

For Creighton’s analysis of the photos of Roof, please see his article The Ridiculous Propaganda Photos of Sheep Dipped Dylann Storm Roof. In that article, Creighton suggests that Roof is a “sheep-dipped asset”:

“The phrase “sheep dipped”, is commonly used in intelligence circles. It’s a way of saying someone has been given an alternate identity. The best known example being Air America, but also in many other covert ops applications. Not necessarily military. “Those who were accepted got “sheep-dipped” and vanished.”

SHEEP-DIPPED – Stripping a soldier of his military uniform and identification so he can pose as a civilian during a covert mission. Lee Harvey Oswald was “sheep dipped” in order to carry on his involvement in the CIA’s clandestine activities. Urban dictionary

Creighton wouldn’t be the first to suggest that Oswald and Timothy McVeigh were sheep-dipped assets who were turned into patsies: The Corbett Report has made compelling cases for both (to read them please see Episode 287 – Meet Lee Harvey Oswald, Sheep-Dipped Patsy and Episode 305 – The Secret Life of Timothy McVeigh).

He also points out similarities to “discovered confessions” in other high-profile cases:

Thoughts of Lee Harvey Oswald’s backyard photo come to mind. As does James Holmes’ stick-figure confession journal “lost” in the post office at his school and Dzhokhar Tsarnaev’s “boatside confession” which they “found” a week after they searched that tiny little boat from top to bottom.

Oh, and it’s funny that Quangel is so proud of herself for supposedly exposing Roof’s racist agenda, because on June 18, Quangel herself said:

Perhaps someone should give Emma a dictionary. The definition of racism is hatred or intolerance of another race or other races. Oh, by the way, Ms. Quangel – here’s the definition of hate speech for you while we are at it: bigoted speech attacking or disparaging a social group or a member of such a group.

Donald Douglas of American Power also made some astute observations about Quangel:

“…it turns out Ms. Quangel’s also a radical feminist and a militant Maoist. She’s a contributor to the “Feminist Current” website and runs the far-left Manyfesto blog (ironically), where we find this robust ideological defense of “red” communism and genocidal regime of Mao Mao Tse-tung, “Red-baiting as the cliff approaches.”

As any “sane and educated” person would know (to borrow from the commenters at my place), Chairman Man was the most murderous totalitarian leader of the 20th century, if not in world history. Tens of millions died in the revolutionary spasms of Mao’s puritanical communist program.

Folks like Emma Quangel, Marxist-Leninists and Maoist totalitarian collectivists, just do not care about human rights or “BlackLivesMatter.” They care about the global revolutionary transformation that eliminates capitalism in the name of the so-called proletarian classes. Leftists exploit race and “racism” as a front for the communist ideological struggle. They don’t care how many people die for the dialectical cause of anti-imperial Utopianism. Their practical program is to align with any and all murderous dictatorships and tyrannies committed to war against the United States and its Western allies.

Is Quangel or her buddy Henry on the Soros payroll? Who knows, but other professional race-baiting paid agitators have already been rallying and protesting in Charleston.

But enough about Quangel – let’s get back to Roof.

On June 18, Kit Daniels of InfoWars investigated Roof’s Facebook account and posted screenshots of his page. Daniels noted that the page appeared to have been created this year, and that Roof only had around 80 friends, many of whom are black.

Roof’s profile picture was added on May 21, 2015, and was his only Facebook image available to the public. It shows him scowling while wearing a jacket with Rhodesia and apartheid-era South Africa flag patches:

Whether or not Roof is a sheep-dipped patsy or is truly a lone-wolf racist with an evil agenda, one thing is for sure: the Obama administration is not going to let this tragedy go to waste. They are already using a template straight out of Saul Alinsky’s Rules for Radicals playbook:

Calls for stricter gun control and removal and banning of the confederate flag are already happening, as if either will make a difference anyway.