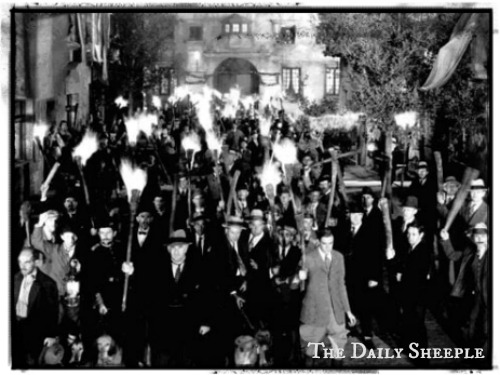 The suspect, Dylann Roof, has been arrested and charged with nine counts of murder and possession of a firearm during the commission of a felony.

Roof has been labeled a “right-wing terrorist,” and photos of him holding a Confederate flag and sitting on a car with a “confederate states of America” license plate have emerged.

Two days after Roof’s arrest, a website called Last Rhodesian was “discovered” by two independent writers. The site contains a page titled Text which is being a called a “racist manifesto.” While the identity of the site’s domain was reportedly masked the day after it was registered, law enforcement officials say they have confirmed Roof is the owner. However, there are reasons to be skeptical of that claim because of how the site was “found” and other details surrounding the content on the website.

But government officials and politicians can’t let a serious crisis go to waste. They have a proclivity for using (and orchestrating) tragic events like mass shootings to justify implementing new laws and banning harmless, inanimate objects.

In addition to cries for more gun control (what else is new?), the Charleston tragedy has inspired a call to ban another item: the Confederate flag, and any and all items emblazoned with it.

Controversy over the Confederate flag is nothing new, as many see it as a symbol of oppression and racism. But as Joshua Krause explains in his piece In Defense of the Confederate Flag, there are abundant misconceptions about the history of the flag, the hypocrisy of hating it and not the American flag, and what the flag means to different people today.

Democrat Jim Webb, a former Virginia senator who has long been a historian of the Civil War (and in particular the Confederacy), said the Confederate flag has “wrongly” been used for racist purposes for years, reports CNN:

He wrote in his 2004 memoir, Born Fighting: How the Scots-Irish Shaped America, that “revisionist politicians and academics to defame the entire Confederate Army in a move that can only be termed the Nazification of the Confederacy.”

“Often cloaked in that argument over the public display of the Confederate battle flag, the syllogism goes something like this: Slavery was evil. The soldiers of the Confederacy fought for a system that wished to preserve it,” he wrote. “Therefore they were evil as well, and any attempt to honor their service is a veiled effort to glorify the cause of slavery. This blatant use of the ‘race card’ in order to inflame their political and academic constituencies is a tired, seemingly endless game that is itself perhaps the greatest legacy of the Civil War.”

But facts aren’t going to stop the frenzy over the flag. While I don’t mean to belittle those who find it offensive, the ensuing hysteria is leading to some extraordinarily unreasonable actions.

Online retail giants Amazon and Ebay have announced that they will no longer allow sales of merchandise that depict the Confederate flag. If a company chooses not to sell a certain kind of product willingly because it doesn’t coincide with their values, fine. But Amazon staffers have told customers that the federal government instructed them to remove the items, reports InfoWars.

Communist merchandise is still available on Amazon, which is really not surprising, because as Breitbart’s Katie McHugh points out, communism is “chic” nowadays:

Amazon sells a huge variety of shirts, posters, you-name-it featuring the hammer and sickle, Joseph Stalin’s mustache, all things Che Guevara, Vladimir Lenin and other colorful revolutionaries who fought to make the world a better place, man. Guevara’s book Guerilla Warfare is on sale in four different formats. In one of the worst genocides in modern times, Stalin forcibly starved Ukrainian peasants in what’s known as the Holodomor, a “terror-famine” that left anywhere from 2.4 million to 7.5 million Ukrainian peasants dead in 1933.

If Hitler is your guy and you like waving around Nazi flags, no worries – you can still get related merchandise on Amazon. The company hasn’t said anything about banning those items.

Walmart and Sears have also banned sales of Confederate flag merchandise from their stores and online shopping sites.

Apple has removed dozens of Civil War games that depict the flag from its App Store, reports MacRumors:

In a statement provided to Buzzfeed, Apple has confirmed that it is removing apps that use the Confederate flag in “offensive or mean-spirited ways.” Apple is also said to be working with game developers to get the affected apps back in the App Store after replacing the Confederate flag.

“We have removed apps from the App Store that use the Confederate flag in offensive or mean-spirited ways, which is in violation of our guidelines,” an Apple spokesperson told BuzzFeed News. “We are not removing apps that display the Confederate flag for educational or historical uses.”

Warner Bros. has announced that it has stopped production of toys and replicas of the iconic Dukes of Hazzard sports car known as the General Lee.

Some are calling for banning the classic film Gone with the Wind due to its “subtle” and “insidious” racism.

These social justice warriors are taking the focus off the REAL problem and blaming everything but the perpetrator of the event – Dylann Roof. Guns are not to blame. The Confederate flag is not to blame. Removing and banning symbols and inanimate objects because they “offend” people is merely political pandering to appease the petulant, insufferable masses.

But I guess that is more comfortable than discussing the harsh realities of tragedies like mass shootings and the existence of evil in our society. The flag provides a distraction from the real issues, ones that are far more disturbing and complex and much more difficult – if not impossible – to eradicate.

It’s easy to rally the masses to scream for bans. The mob mentality kicks in – it is human nature. When a tragedy strikes, we are all angry, emotional, and frustrated. We feel a sense of solidarity with others who share our outrage and pain, and that makes us feel empowered. We want to DO something to stop the horror, and to prevent it from happening again.

But our ideas and actions while we are in this state are not always rational.

Does banning things stop behaviors that are supposedly associated with them? It sure doesn’t seem that way – in fact, it may have the opposite effect. For example, ammunition and gun sales tend to skyrocket after bans or restrictions are announced. The scarcity mentality kicks in, and people stockpile items they think they won’t be able to obtain later.

Sales of three versions of the flag were up 1,670% to 2,305% over a period of 24 hours, according to Amazon data. One of those flags, priced at $1.80 plus shipping, is currently the ninth best-selling item in the Patio, Lawn & Garden department and the top-selling item among all outdoor flags and banners sold on Amazon.

Governors of some states that offer Confederate flag license plates are already planning to ban them. Virginia Governor Terry McAuliffe said that the Confederate flag is no longer allowed on any state plates, and that people will have to change their plates within four months:

“In the next 120 days, every license plate in the commonwealth with the Confederate flag will be eliminated,” Gov. McAuliffe told FOX 5.

Prohibiting or ending the sale of “offensive” items that feature the Confederate flag is one thing, but the witch hunt is escalating, as they tend to do. We can’t stop at small items like shirts, belt buckles, flags, and license plates.

Todd Starnes reports that some “revolutionaries” are demanding name changes for US military bases that were named after Confederate soldiers.

Memorials and statues depicting Southern or Confederate figures are being vandalized and are some are arguing that they represent America’s racist past and should be removed:

CNN anchor Ashleigh Banfield this week questioned whether the Jefferson Memorial should be taken down because Jefferson owned slaves. “There is a monument to him in the capital city of the United States. No one ever asks for that to come down,” Banfield said.

What about Monticello, Jefferson’s private plantation in Virginia? At any one time, about 130 enslaved men, women, and children lived and worked there. How long until fanatics call for the estate, which is now a tourist attraction, to close or be demolished?

Jefferson wasn’t the only president who owned slaves: others, including George Washington, Andrew Jackson and James Madison did as well. Shall we sweep the entire United States for any shred of memorabilia associated with them?

While we are at it, maybe we should ban President Obama and force him out of office. His family reportedly owned slaves, after all.

Obama’s campaign team in 2008 did not dispute the information.

“While a relative owned slaves, another fought for the Union in the Civil War,” Obama’s campaign spokesman Bill Burton said. “And it is a true measure of progress that the descendant of a slave owner would come to marry a student from Kenya and produce a son who would grow up to be a candidate for president of the United States.”

Where does it end? What is next?

Is this call to remove a flag that has existed for 150 years an inane attempt to erase some of America’s history – out of sight, out of mind? Historical revisionism is a method used to alter the way history is viewed. It is often employed to cause people to accept a change in public policy.

There are three ways that goal is typically attained:

We see this sanitized, diluted history in public school textbooks.

Isn’t this what dictators and communists do? Winston Smith, the main character in George Orwell’s novel 1984, is a historical revisionist. The novel is a classic example of how regimes distort history to suit political purpose and is based on Communist policies in Russia.

American history is what it is – including the good, the bad, and the downright ugly. Attempting to censor and ban symbols that are reminiscent of that history will do nothing to change it, nor will such actions influence the present or the future.