There’s a reason I took the time to point this out real quick. According to Raw Story:

Police Chief Eddie Driggers said the photo undermines the trust and confidence citizens have in police because the Confederate flag “symbolizes hate and oppression to a significant portion of the citizens we are sworn to serve.”

Dildine has ten days to appeal. I suspect he’ll be going with freedom of expression. It is, after all, his underwear… 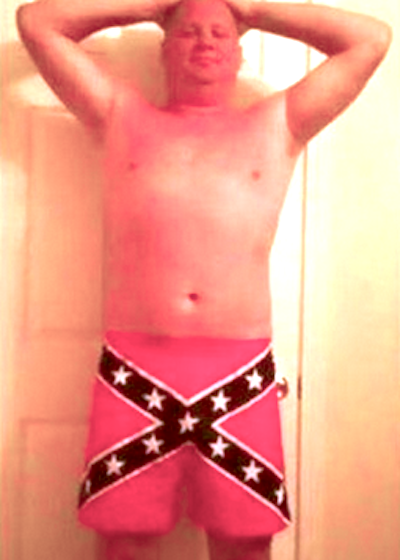 What’s insulting about this has nothing to do with the fact that everyone’s eyeballs have now been assaulted with this cheesy picture of North Charleston Police Sgt. Shannon Dildine in his boxers.

What’s insulting about this is that, because it fits the political agenda with the timing of the Charleston shooting and the divide-and-conquer plot being run against us all, they actually fired this guy over this picture. The media is taking lots of time to make the North Charleston PD look like a real stand-up organization for taking action on this (what a great PR move, by the way). A huge deal is being made out of this in the mainstream press.

Meanwhile, we live in a country where on average more than two people a day are killed by police, regardless of race, creed, age, religion, sex, etc. So many other officers who commit so much more egregious acts are never suspended or even reprimanded, let alone actually fired.

So this cop is fired for posting a picture of himself in confederate flag boxers on Facebook?

Meanwhile, officers can flashbang a baby in his crib after serving a SWAT raid on the wrong house and not get fired.

Officers can choke a man to death for the high crime of selling untaxed cigarettes and not get charged.

Officers can shoot and kill totally unarmed people and not get charged. Sometimes those people are unarmed teens with emotional issues whose parents had called the cops to come help their child in the first place.

In fact, officers can gun down innocent people who called 9-1-1 for help AND THEIR THREE-LEGGED DOGS in the same visit and not get fired.

Officers in this country can violently wrestle an eight-month pregnant woman to the ground for failure to show ID while she’s screaming that she’s pregnant and charge her only with resisting arrest (arrest for what? not showing ID when you aren’t under suspicion of a crime is not illegal) and not even get reprimanded on the fact that they aren’t allowed to arrest people merely for not showing ID!

But hey, post a picture of yourself wearing boxer shorts at just the opportune political moment in a way that will help fuel the obvious agenda, and your butt is canned (and your picture of said butt gets splashed all over the news).

If this story doesn’t clearly illustrate for police just what kind of expendable pawns the system considers them to do be… not sure what would.