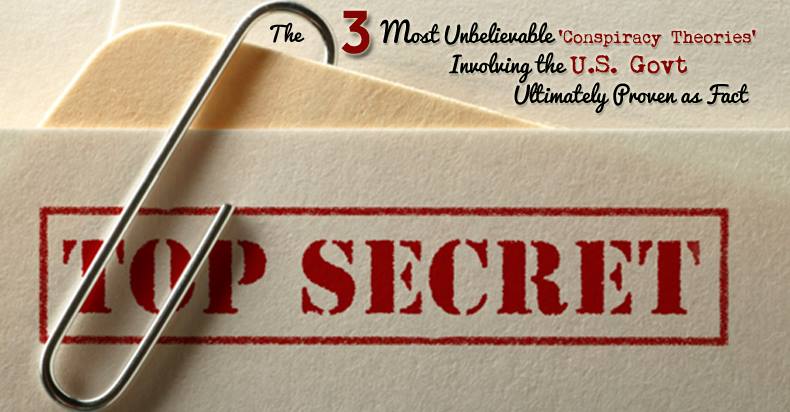 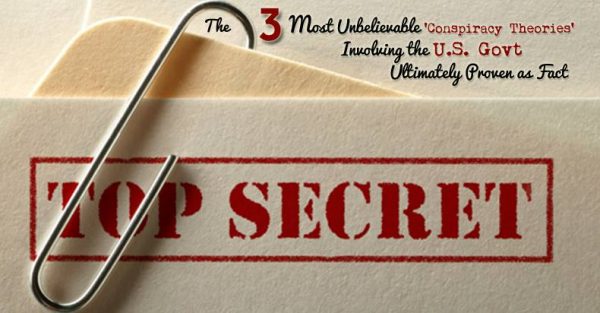 If someone told you that the U.S. government plotted terror attacks against targets on U.S. soil, that CIA had infiltrated the entirety of Western media and was using the media as a propaganda tool or that after World War II the U.S. secretly brought over a thousand Nazi scientists to the U.S to work on top secret projects for the federal government, people would likely say they were a wild conspiracy theorist.

On the surface these, “conspiracy theories” sound like insane movie plots produced by Hollywood, but sometimes the truth is stranger than fiction – and much more ominous.

Welcome to 2015, where tinfoil has become reality.

Let us guide you through 3 of the most tyrannical escapades ever endeavored upon by the United States government, proven through investigation and declassified documents.

After the failed Bay of Pigs invasion of Cuba in 1961, in the midst of the Cold War, a top secret plan was formulated, called Operation Northwoods. The operation was signed off on by the Joint Chiefs of Staff and made it all the way to President Kennedy’s desk, where he refused to sign off on the diabolical plot. Some of the most disturbing revelations of the op called for U.S. government agents to carry out terrorist attacks within the United States.

“We could develop a Communist Cuban terror campaign in the Miami area, in other Florida cities and even in Washington. The terror campaign could be pointed at Cuban refugees seeking haven in the United States. We could sink a boatload of Cubans en route to Florida (real or simulated). We could foster attempts on lives of Cuban refugees in the United States even to the extent of wounding in instances to be widely publicized. Exploding a few plastic bombs in carefully chosen spots, the arrest of Cuban agents and the release of prepared documents substantiating Cuban involvement also would be helpful in projecting the idea of an irresponsible government.”

To justify using the U.S. military in Cuba, the military was willing to engage in actual terrorist attacks on American soil. Let that sink in for a minute. This is not a crazy conspiracy theory, this actually happened and the only reason it wasn’t operationalized is because Kennedy said no.

This CIA operation began as the Cold War ramped up in the 1950’s. In an attempt to gather intelligence and influence public opinion, the CIA recruited journalists from across the United States. The program operated for nearly three decades and was deeply embedded in the fabric of American journalism. These compromised journalists provided the CIA direct access to some of the most prestigious media outlets in the country. The scope of the infiltration of the media was vast, encompassing newspapers, periodicals, press services, news agencies, radio and television stations, book publishers and foreign media outlets. A congressional investigation by the Church Committee exposed the vast propaganda program, stating:

“The CIA currently maintains a network of several hundred foreign individuals around the world who provide intelligence for the CIA and at times attempt to influence opinion through the use of covert propaganda.”

Respected journalist Carl Bernstein, writing about the depth of the CIA’s co-opting of media, wrote in Rollingstone in 1977:

“Some of these journalists’ relationships with the Agency were tacit; some were explicit. There was cooperation, accommodation and overlap. Journalists provided a full range of clandestine services — from simple intelligence-gathering to serving as go betweens with spies in Communist countries. Reporters shared their notebooks with the CIA. Editors shared their staffs. Some of the journalists were Pulitzer Prize winners, distinguished reporters who considered themselves ambassadors without portfolio for their country. Most were less exalted – foreign correspondents who found that their association with the Agency helped their work; stringers and freelancers who were as interested in the derring-do of the spy business as in filing articles; and, the smallest category, full-time CIA employees masquerading as journalists abroad. In many instances, CIA documents show, journalists were engaged to perform tasks for the CIA with the consent of the managements of America’s leading news organizations.”

Operation Paperclip was the codename for an operation in which US intelligence and military services secretly brought Nazi scientists to the U.S., permanently repatriating them as World War II came to a close. Originally the project was called Operation Overcast, and is also referred to as Project Paperclip.

The U.S. showed particular interest in scientists specializing in aerodynamics and rocketry, chemical weapons, chemical reaction technology and medicine. These scientists and their families were secretly brought to the United States, without State Department review and approval. This is because their service for the Nazi party and SS memberships, as well as the classification of many as war criminals or security threats, disqualified them from officially obtaining visas.

President Truman had ordered the exclusion of anyone who was “a member of the Nazi Party, and more than a nominal participant in its activities, or an active supporter of Nazi militarism.” This would have excluded most of the leading Nazi scientists, so to circumvent Truman’s order, the Joint Intelligence Objectives Agency (JIOA), created false political biographies for the scientists. JIOA then went on to expunge all records of the scientists’ affiliation with the Nazi party and grant each of them U.S. government security clearances, thus allowing them to work on highly classified projects for the U.S. military.

The majority of the 1,500 Nazi scientists were deployed to various military testing sites to work on guided missile and ballistic missile technology, along with numerous other scientific endeavors. These actions, in turn, led to the foundation of NASA and the U.S. ICBM program.

All three of these “theories” have been brushed off by many as “crazy” and unrealistic even though there is concrete evidence to prove them all to be true. These types of insanely horrific conspiracies will continue to occur until enough people pull their heads out of the sand; and let it be known that we see what the man behind the curtain is doing.

With knowledge of these heinous acts, one must question exactly what type of similar operations are currently being run by the U.S. government, without the knowledge of the American public.