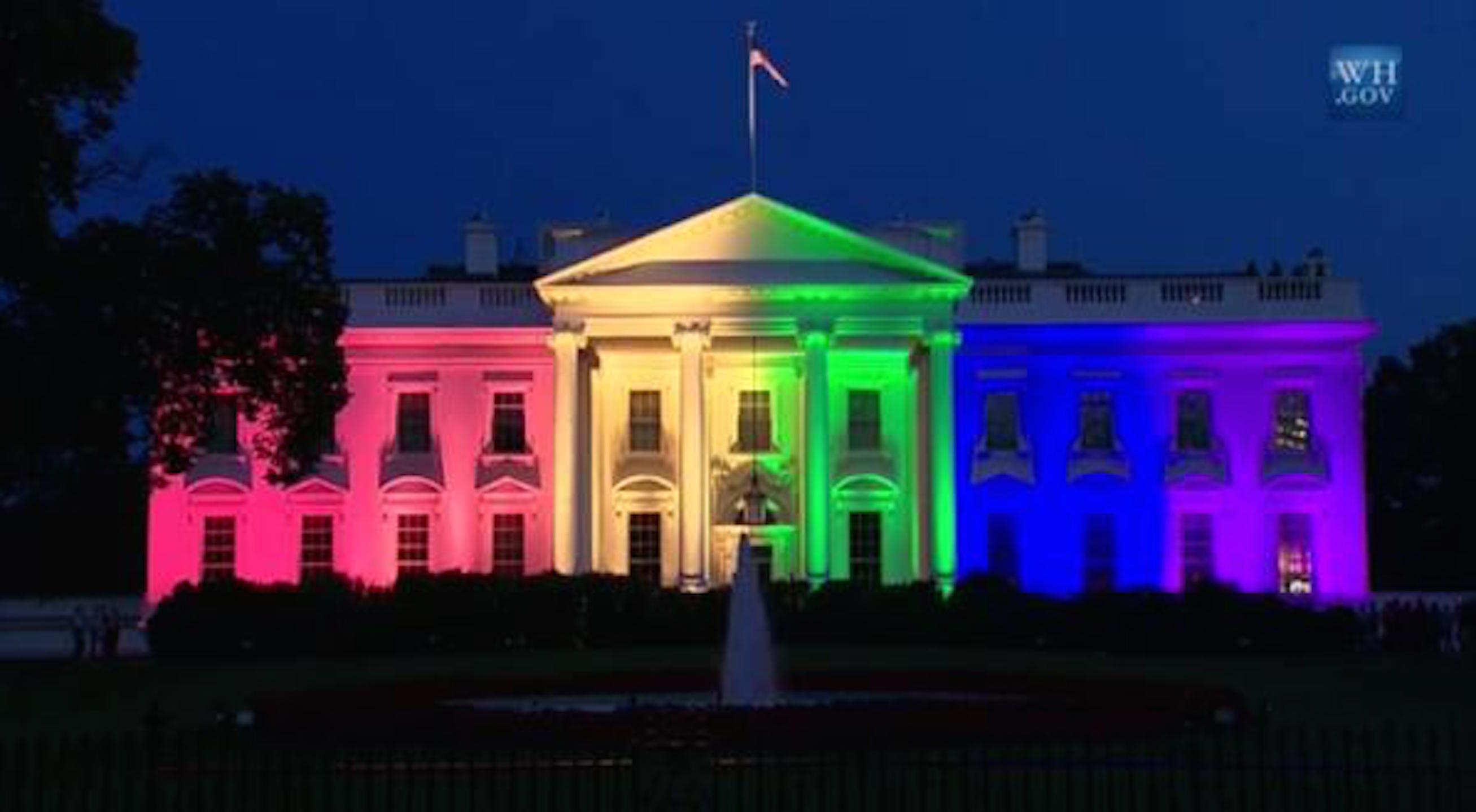 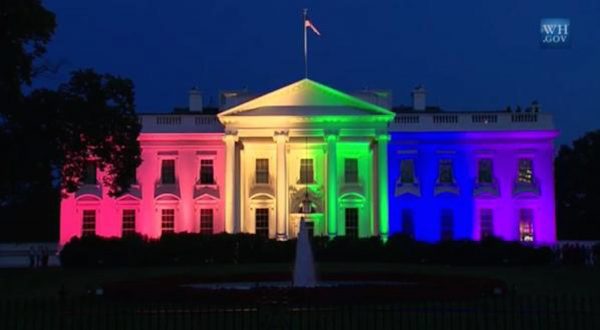 Following the illegal ruling of the Supreme Court regarding marriage on Friday, the Obama White House (the People’s House) was turned into a flag of fist-waving against the Almighty God, whom our original founders, the Pilgrims, established this land in His name.

“Tonight, the White House was lit to demonstrate our unwavering commitment to progress and equality, here in America and around the world,” a White House official said.

“The pride colors reflect the diversity of the LGBT community, and tonight, these colors celebrate a new chapter in the history of American civil rights,” the official added.

There is nothing progressive, dignified or equal about men sodomizing men or women engaging women in similar manner.

Obama is simply using the sodomite community’s agenda as a political battering ram to attack the law and Christianity. Muslims are prepared to come in behind the sodomites and establish a totalitarian law that is demonic. Finally, the Communists will ultimately seek to destroy the Muslims after they are done using them.

The first group exalts anarchy. The second group seeks to bring order to that anarchy via their pedophile, non-prophet’s law, and the third group will seek to be God since they openly deny He exists.

However, understand something: The rainbow was a symbol that God would never flood the entire earth again with water. It is mentioned in Genesis and in Revelation.

In Genesis God puts forth his promise:

Later, in the Book of Revelation, which is the close of the canon of Scripture, we read that a rainbow encircles the throne of God and clothes the mighty angel, which many believe is Christ, as he has similar characteristics (cf. Rev. 1:10-18). Each of these symbolizing that God is faithful to keep His Word:

And he that sat was to look upon like a jasper and a sardine stone: and there was a rainbow round about the throne, in sight like unto an emerald. –Rev. 4:3

And I saw another mighty angel come down from heaven, clothed with a cloud: and a rainbow was upon his head, and his face was as it were the sun, and his feet as pillars of fire. –Rev. 10:1

Now, here’s what sodomites and their supporters should give heed to. God has been faithful for thousands of years to not destroy the world with water again, but He has also said that he will destroy it with fire in the future.

Paul tells us in Galatians:

Be not deceived; God is not mocked: for whatsoever a man soweth, that shall he also reap. –Gal. 6:7

He also teaches us what happens to those who suppress the truth in unrighteousness and dishonor the true and living God:

For the wrath of God is revealed from heaven against all ungodliness and unrighteousness of men, who hold the truth in unrighteousness; Because that which may be known of God is manifest in them; for God hath shewed it unto them. For the invisible things of him from the creation of the world are clearly seen, being understood by the things that are made, even his eternal power and Godhead; so that they are without excuse: Because that, when they knew God, they glorified him not as God, neither were thankful; but became vain in their imaginations, and their foolish heart was darkened. Professing themselves to be wise, they became fools, And changed the glory of the uncorruptible God into an image made like to corruptible man, and to birds, and fourfooted beasts, and creeping things. Wherefore God also gave them up to uncleanness through the lusts of their own hearts, to dishonour their own bodies between themselves: Who changed the truth of God into a lie, and worshipped and served the creature more than the Creator, who is blessed for ever. Amen. For this cause God gave them up unto vile affections: for even their women did change the natural use into that which is against nature: And likewise also the men, leaving the natural use of the woman, burned in their lust one toward another; men with men working that which is unseemly, and receiving in themselves that recompence of their error which was meet. And even as they did not like to retain God in their knowledge, God gave them over to a reprobate mind, to do those things which are not convenient; Being filled with all unrighteousness, fornication, wickedness, covetousness, maliciousness; full of envy, murder, debate, deceit, malignity; whisperers, Backbiters, haters of God, despiteful, proud, boasters, inventors of evil things, disobedient to parents, Without understanding, covenantbreakers, without natural affection, implacable, unmerciful. –Rom 1:18-31

All these things are characteristic of those who reject God. However, it is the open sin of sodomy that is on display first and foremost demonstrating God’s judgement, but Paul doesn’t stop there. He adds:

Who knowing the judgment of God, that they which commit such things are worthy of death, not only do the same, but have pleasure in them that do them. –Rom. 1:32

So, while you may not engage in sodomy or even the other things listed above, but you give hearty approval to it, they you are worthy of the same judgment they are.

Since our civil leaders have abandoned their role as the executors of God’s wrath upon evil doers (Rom. 13:15), they must be brought to justice, as well as those whose crimes they are covering for because God… will not… be mocked!

The good news is that if God’s people repent of their own wickedness, then God has promised to heal our land. So, Church? When will we repent of our own wicked ways and see God once again stay His hand of judgment?