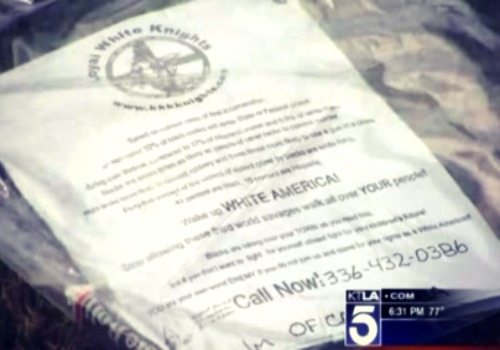 “Ku Klux Klan propaganda blankets Whittier neighborhood” the LA Times declared Sunday. The news has quickly spread across the mainstream press for full impact in the wake of Charleston.

Apparently the people of Whittier in Los Angeles County woke up Sunday morning to find leaflets advertising membership in a California chapter of the Ku Klux Klan on their front lawns.

According to the LA Times, people living on the 5400 block of Adele Avenue got an added bonus of a little cellophane bag with a piece of candy and a rock in it (likely to weight it down and keep it in the yard).

“When I first read it, I thought it was a hoax,” said Stella Paquin, a longtime Whittier resident who found the fliers on her front lawn.

But as she read the commentary on African Americans contained in the fliers – which included a phone number and mailing address for the Loyal White Knights of the Klu Klux Klan – she realized she was not the victim of a prank.

“I have never heard or read anything that impacted me so much to think, ‘My goodness, there are just such hateful people,’” Paquin said. “Whittier is a very quaint town. This really shocked us.”

Apparently the distribution of white supremacist propaganda also occurred in Orange County last week as well, so they’re really hitting this one up hard post-Charleston. A similar incident also took place earlier this year in Santa Ana on, of all days, Martin Luther King Jr. day.

Again, this sounds like something straight out of a COINTELPRO course on provocateuring, especially in the fact that it was splashed all over the news to add a little something to the race baiting in a post-Ferguson, post-Baltimore, post-Charleston America.

Speaking of COINTELPRO, considering there have been recent claims the FBI covered up their KKK informant’s role in Martin Luther King’s assassination, and that the agency destroyed crucial documents on purpose to stop the exposure of a high-ranking Klansman who also happened to be a Fed agent, the government might know a little thing or two about the KKK…

With everything else going on right now to fuel the current race war psyop, the only thing truly shocking about this headline is that we didn’t see it sooner.

Actually we did see it sooner, it’s just that not enough people were paying attention yet; the same exact thing — a KKK recruitment leaflet drop — happened back in April in Pennsylvania, just two weeks after the Baltimore riots started over Freddie Grey’s death. Residents who lived along Main Street in Delta, York County awoke to find a recruitment letter from the Ku Klux Klan in a plastic bag on their sidewalks and lawns. Sound familiar?

But that was after a police brutality incident, not an over-the-top racist mass murderer incident, so it didn’t generate as much anger and outrage in the general population as the timing of this leaflet drop likely will.

Speaking of leaflet drops, our government psyops program is no stranger to them.

In fact, our military-industrial complex has been using this form of psychological warfare since at least the first World War. By World War II, a special exploding leaflet cylinder (as seen above) was developed just for this purpose. More recently it was reported in March 2015 that the Pentagon was dropping grisly anti-ISIS propaganda over select Syrian cities: 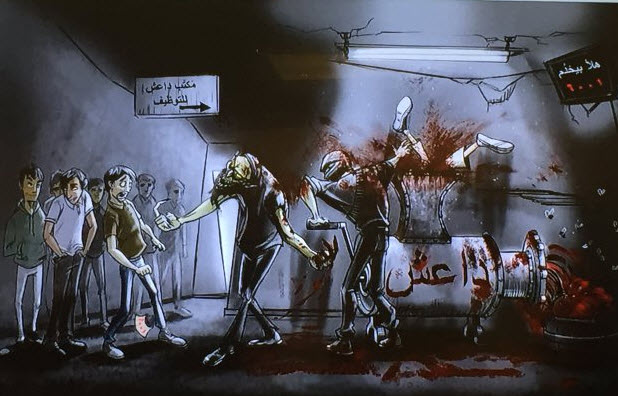 So would provocateurs place a few expertly timed KKK leaflets on the lawns of Main Street, USA to await their due in mainstream headlines across the country like adding a little more kindling to the race war fire someone very high up the chain started last year?

It’s not that much of a stretch. Everything about the Charleston situation and its aftermath has seemed awfully scripted, right down to the ridiculous “white privilege” arrest of Dylann Roof that flies in the face of everything we know about how cops in Police State, USA treat suspected criminals these days (especially someone who supposedly just gunned down nine people in cold blood).

And remember, kids: an amendment in the 2012 NDAA repealed the Smith-Mundt Act of 1948, officially ending the ban on the use of propaganda domestically against American citizens.

(Not that the government wasn’t doing that already anyway, but still…)