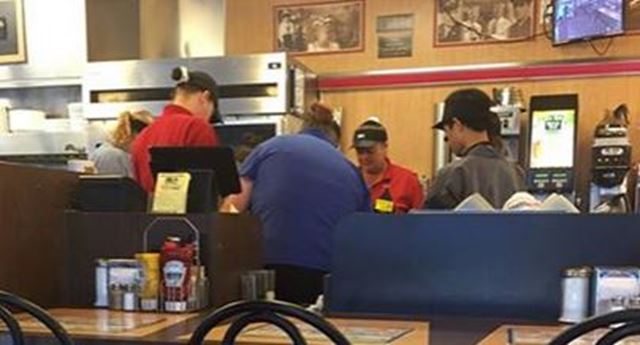 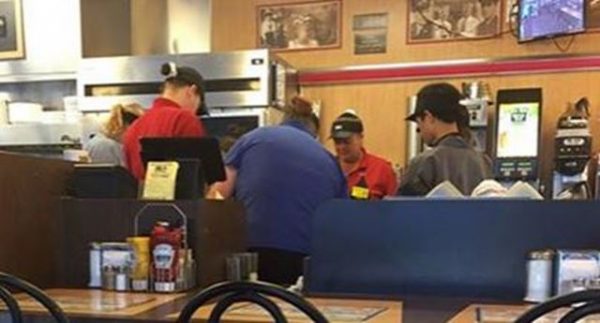 While we cover a lot of news and political things on our site, a question does come to my mind often, what exactly is “news”? Is it what the state-controlled media outlets want news to be, or is it what is of interest to people that actually impacts their lives? I suppose people can debate that issue and with that in mind, I found this piece of news not only encouraging, but also realize more and more how these types of things and these kinds of people impact our lives daily, and it comes from of all places… Waffle House.

Paige Price, a young, Florida mother was eating her breakfast at a local Waffle House in Panama City Beach when the manager of the establishment yelled out an announcement. The announcement was that it was time for a shift change. However, it was the employees’ response that caught the young woman’s attention.

The employees all stopped what they were doing and gathered in a circle, joining hands (some removing hats) and prayed together.

Price witnessed the event, amazed that in a world where Christianity is under attack, that in a well-known establishment like Waffle House that these employees would openly break and pray as their shift changed. She quickly grabbed her camera and snapped off a photo and posted to Facebook.

She described what took place. “We are in Panama City Beach where I took this photo. We stopped here to eat at about 9ish. I over heard [sic] the manager say “It’s shift change”. No big deal right? I looked over and noticed all of the workers gathering around each other, in a circle, some holding hands, and some taking their hats off.”

“I’m pretty sure I had a very weird look on my face because I had to ask myself a few times if this was real, if they were really about to pray before each of them went their [sic] separate ways, if they were really about to PRAY and not care who they offened [sic],” she added. “They gathered in their little circle, spoke a soft prayer, and went on about their business.”

So, why did she feel compelled to take the picture and post it?

“The world that Ive [sic] grown up in for 23 years is changing fast and to see this just made my heart smile,” she explained. “Maybe there’s hope for our country after all. I applaud these people for standing up for what they believe in and not worrying about offending others or what others may think/say about them.”

From this one post, her story has gone viral among many outlets. As of the writing of this article, her post had been shared over 250,000 times! This is good news that America needs to hear. It is encouraging to Christians to know that others are not easily bullied, even in the workplace and to know that there are still Americans who are brave and unashamed to acknowledge the Creator.

And before some anti-theist comes along and cries about this, let’s just point them to the fact that under the US Constitution there is no law to be made by government that infringes upon the people’s right to the “free exercise” of their Christian faith. In other words, Christians are not confined to their homes or church buildings to exercise their freedom to call upon the true and living God. However, there is no God-given right to worship false gods.

Christians, let this be a sign to you that you have incredible opportunities to bring good news into the world from where you are.

I’ve always enjoyed being able to eat at a Waffle House. I honestly think that in every one I’ve ever been in, I’ve discovered some of the most polite and enjoyable people there are. Well done employees of Panama City Beach Waffle House! May God bless you for honoring Him.