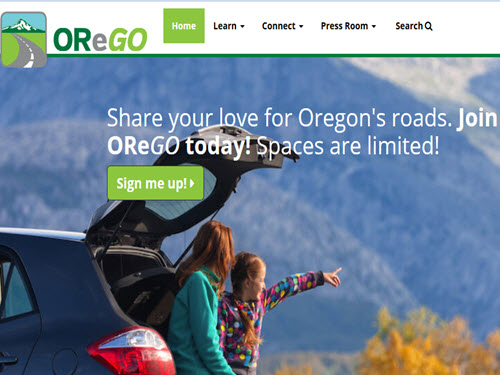 The freedom of driving is about to get a lot less free in more ways than one.

“Rare American” David Hastings, Oregon hybrid car owner told Fox News, “I’m a statist who is happy to blindly contribute to the total tyranny that has almost completely surrounding us all and I see no potential downsides to a technological control grid where the government tracks my every move—”

No wait, sorry, it was, “I’ve been free-loading on the highways for 20 years driving electric cars or hybrid cars, getting at least 40 miles to the gallon. So I haven’t been paying my share.”

Mr. Hastings apparently cannot wait to pay more taxes to drive on state roads while being tracked by the government as he drives on those roads. In fact, he has volunteered for this in a state transportation taxing scheme that will eventually be mandatory not just in all of Oregon, but likely the entire country.

In a move that 28 other states are in some form of transitioning toward, Oregon has officially launched it’s OReGO program, which will replace the gas tax by tracking a driver’s every move and charging a one-and-a-half cent per mile tax on it. Two of the three programs involved will use GPS tracking to trace and store driving and location data on every driver.

“To put a GPS monitor in everybody’s car, the government already knows too much about us as it is,” Jeff Kruse, a Republican lawmaker told Fox News.

(If I could have put more types of visual emphasis on that last line, I would have.)

So because of inflation and the reality that less people are driving and more people who do drive are choosing hybrid or higher gas mileage cars, this is the new way the system and its loving bureaucrats have come up with to pay for road and bridge maintenance: taxing your every driven move by tracking, tracing, and databasing your every driven move.

On top of that, OReGO vendors will take .40 cents off the top of every dollar collected just to run the system. That means someone’s making bank off this off the top, and that has nothing to do with fixing the roads.

Right now OReGO is on a volunteer-only basis and capped at 5,000 people, but the plan is to eventually make this mandatory for everyone, everywhere and as Fox News reports, “change the way states pay for roads — forever”.

At least the gas tax was a passive way to track people’s consumption/travel. It didn’t watch and store your every single mile driven.

The Oregon Department of Transportation (ODOT) even made a cute (read:patronizing) little cartoon to introduce the program.

“With OReGO, you put a simple device in your car and drive! It’s cool!”

Watch ODOT Communications Manager Tom Fuller insert his GPS tracking device and explain how his car will be tracked everywhere he goes. Yay!

There is one version through ODOT that doesn’t involve direct GPS tracking, but obviously from the video of Mr. Fuller above and information on the OReGO website, this is not the option they are promoting or incentivizing.

In the non-GPS enabled version, the department of transportation sends you a mileage tracker in the mail, and you can track the miles driven online. The site states, “This OReGO option is delivered through a partnership with Sanef ITS Technologies, a global road charging expert, and Intelligent Mechatronic Systems (IMS), a technology leader in connected car and telematics systems.” Hard to believe it won’t also be tracking someone’s location, but that’s the claim.

However, with this version, you get charged for miles anywhere you go, even outside of Oregon. So if you take a cross country roadtrip, you will have to pay taxes on every mile driven to ODOT, regardless of the fact that it wasn’t in Oregon.

This version also does not come with all the “Value added services,” such as being able to “Earn badges that unlock for good driving behavior,” so you can “Compete with friends and family to see who can unlock the most badges.” Other features include showing you maps of everywhere you’ve been, tracking your carbon footprint and setting up “safe zones” that, for example, will alert you if your teen were to drive to an area you don’t want him or her to go.

Being tracked and traced by the government was never this much fun! Woo-hoo!

With the coming smart grid and Internet of Things, this will surely be mandatory for everyone, everywhere eventually.

It’s only a matter of time.