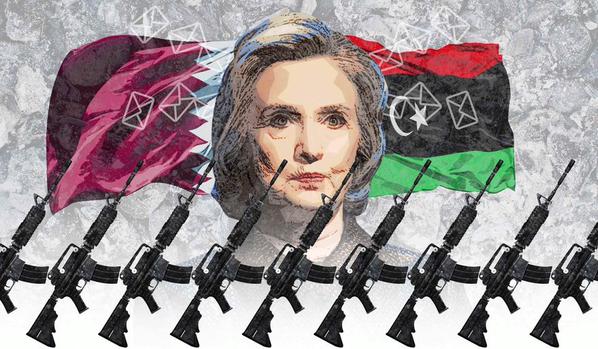 Judge Andrew Napolitano held nothing back on Fox Business News Thursday morning while discussing Hillary Clinton’s culpability in the foreign policy disaster that is Libya and Syria.

I am convinced as are others who have looked at this — and FOX aired this in a special Saturday night and several times over the weekend — that a conspiracy existed between the president, and Mrs. Clinton, and Congressional leaders from both parties in both Houses others in the State Department, the Treasury Department and the Justice Department to get arms shipped to rebels in Syria and in Libya. And some of those rebels are members of organizations that are on the terror list and providing them with material assistance is a felony. So the arms dealers applied for and received permission from State and Treasury lawfully to sell arms to the government of Qatar and they lawfully did so. Qatar then sold, delivered, bartered or gave these arms to the terrorist organizations with the knowledge and consent of Hillary Rodham Clinton when she was Secretary of State.

She probably thought that she could wage a private war and overthrow Qaddafi. She succeeded in doing that but of course created chaos, and overthrow Assad in Syria and take credit for it. This has been an unmitigated disaster and she’s done her best to cover it up, and she’s covered a lot of it up but now it’s starting to come out.

Folks, this is a huge deal. This should be as big of a story as any of these other scandals that have come out over the last few years, and this should be as big of a story as the Iran-Contra Affair was back in the 80’s. The big difference, of course, is that Iran-Contra was during a Republican Administration and this has been during a Democrat one. The decision by this group of politicians (with likely CIA involvement) directly led to the assault on the embassy in Benghazi and the assassination of Ambassador Chris Stevens, as well as the murder of three other innocent Americans.

Will the mainstream media pick up this story? Don’t hold your breath.