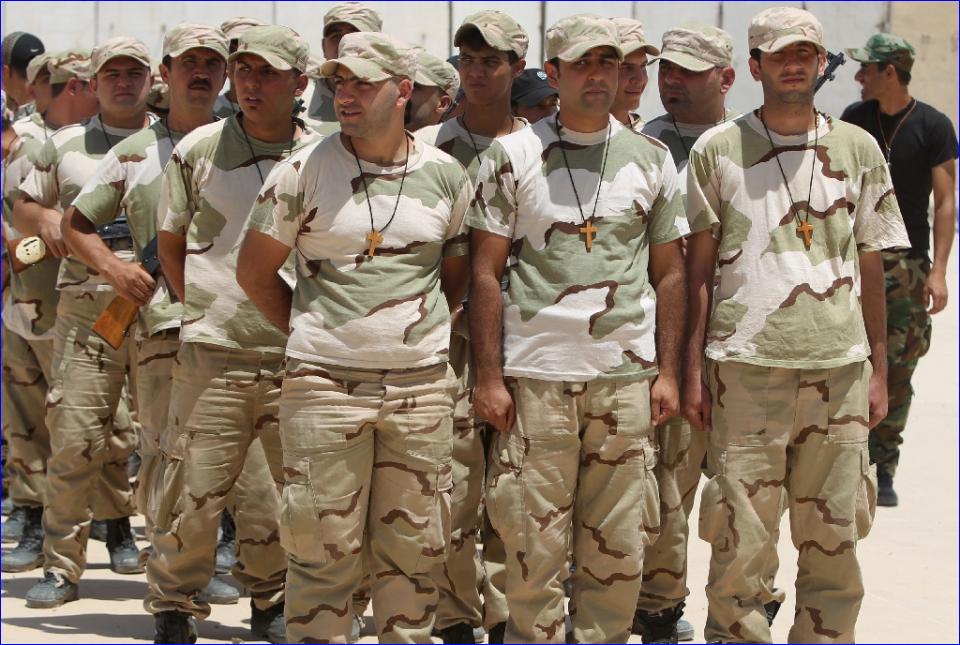 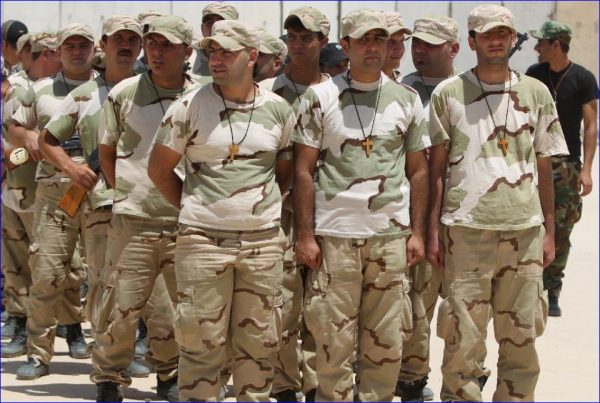 A large and valiant militia, consisting of hundreds of Christians, has been formed to fight against the Islamic persecution and invasion of Christian lands in Iraq. They number in the dozens, they adorn themselves with crosses hanging from their necks, they have denied the self, they are filled with contrition, they are ready to fight the enemies of God, their hearts are prepared to endure holy war, their minds are set on the precepts of Heaven, their very beings are taken by the Word of God, “piercing even to the division of soul and spirit” (Hebrews 4:12). They call themselves the “Ketaeb Babylon.”

According to another Ketaeb Babylon commander, there are “hundreds of Christian fighters located now in various areas of Salaheddin… in addition to others responsible for protecting churches in Baghdad province.” As hundreds have already been recruited, the numbers of volunteers to “fight the Daesh (ISIS) terrorist organization” is continuing, he said.

They hang around their necks wooden crosses, just as the Crusaders of old did, when — in the old relic of Christendom — the Christians placed the Cross on their chests and on their shoulders, beautifully manifesting the words of Christ: “Whoever desires to come after Me, let him deny himself, and take up his cross, and follow Me.” (Mark 8:34)

They are training to retake their homes that were captured by ISIS in areas in like Mosul, which was captured last year. When the heretic Muslims overtook Christian neighborhood and areas, they were given the choice to convert, leave, pay the tax, or die. Most of them fled, but some wanted to fight back, and these are the men who are determined to take up the whip and the Cross to strike the thieves of lives and those who prey upon souls, and drive them away from the holy Temple of God, that is, the Body of Christ, “the temple of the Holy Spirit who is in you” (1 Corinthians 6:19). In fact, the majority of the “Ketaeb Babylon” unit are from Mosul.

The militia trains in a military base near the Baghdad airport, and some Muslims are actually training them on how to use the AK-47, and how to utilize basic combat maneuvers. But this does not mean that they forget Christianity, for as they present themselves in their military parades, they cry out to the mother of our Hope, chanting Ya Mariam (Oh, Mary!).

Now, why would they do this? The wife of Ahasuerus, Esther, commanded the death of Haman, Jael, the mother of Barak, “blessed be she in her tent” (Judges 5:24), struck the head of Sisera with a nail, and Deborah exhorted Barak to fight the enemies of God, and Mary, whose Seed — Jesus Christ — shall bruise the head of the old serpent (Genesis 3:15), and whose image was hoisted above the ship in the Battle of Lepanto, when the Christians crushed the Muslims, told our Lord, “They have no wine.” (John 2:3)

And as Christ transformed the water to wine, ocean of peoples who are His enemies “shall also drink of the wine of the wrath of God, which is poured out full strength into the cup of His indignation” and they shall be thrown “into the great winepress of the wrath of God.” (Revelation 14:19-20)

So, as Mary was the one who requested more wine, so shall she be with Christ in the day when He makes the oceans of His enemies into blood. For the Scripture says, “the Lord my God will come, And all the saints with You.” (Zechariah 14:5) And the Apostle speaks of “the coming of our Lord Jesus Christ with all His saints.” (1 Thessalonians 3:13). Would not Mary be among the saints, and would she not — by her very actions and Faith — have a great position amongst the saints, having gathered so many treasures in Heaven? So then these Christian militants, as the Christian warriors of old, express their honor towards Mary, the mother of our Salvation.

One of the Christian soldiers, 17-year-old Chaldean Christian Frank Samir, made it very clear that this battle against the Muslim terrorists is a holy war:

We heard that the Christians had an opportunity for jihad (holy war), and we all came and volunteered… Our children are dying; our Christian families were displaced. How do we ourselves accept that people say the Christians are not fighting? On the contrary, we want to fight everywhere

Notice how they use the word “jihad.” Now, this does not mean that the Christians took a Muslim word, or that they adopted the Islamic concept of holy war. No. It is only another indication that the Muslims took the idea of holy war from Christianity, and applied it to themselves. The original jihad (or the idea of holy war or struggle against the enemies of God) was a Christian concept. Islam, being a Christian heresy, took this concept and gave it an Arabic word, and advanced their own heresy through the use of holy war. Christianity has holy war, but it is for righteousness. Islam has holy war, but it is for evil.

In their training center, the Christians display a large Cross, and alongside the Cross are the words “God is greatest” and “There is no god but God.”

There are nine training courses, and each course is two weeks. Rayan al-Kaldani, the secretary general of Ketaeb Babylon, said:

The main aim of forming our forces is the liberation of Mosu… We took part in the operations to liberate the city of Tikrit and other operations, including Baiji, in Salaheddin province

According to Kaldani, the Christian soldiers are under the command of Abu Mahdi al-Mohandis, who is amongst the top commanders in the “Popular Mobilisation” forces, which consists mainly of Shiite fighters.

One commander who calls himself Hajji Ali, a leader of one of the Shiite units said that the training “focuses on close-quarters combat, unconventional warfare and war inside the cities. …Their eyes are on Mosul and the areas occupied by Daesh.”

The volunteers say Mosul is the main goal, but their fight is not limited to that city.
Mosul “is our first aim,” said 16-year-old Raymoun Salwan, who was displaced from the city.

But “I will continue to fight terrorism wherever it goes in Iraq and every place,” he said.