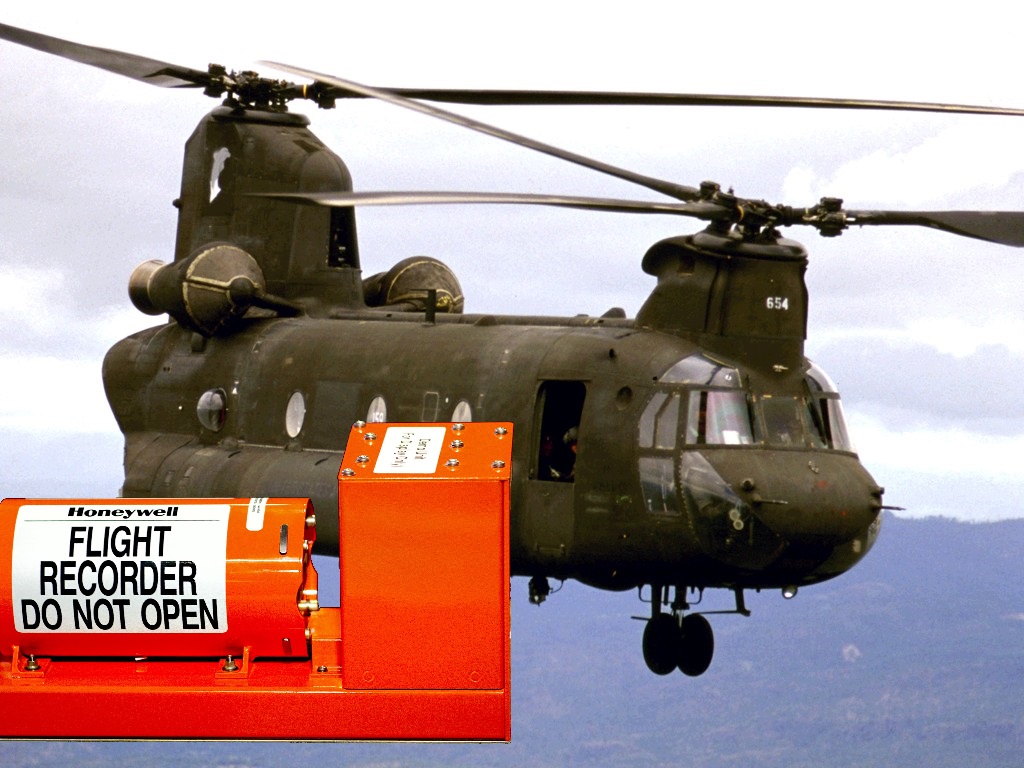 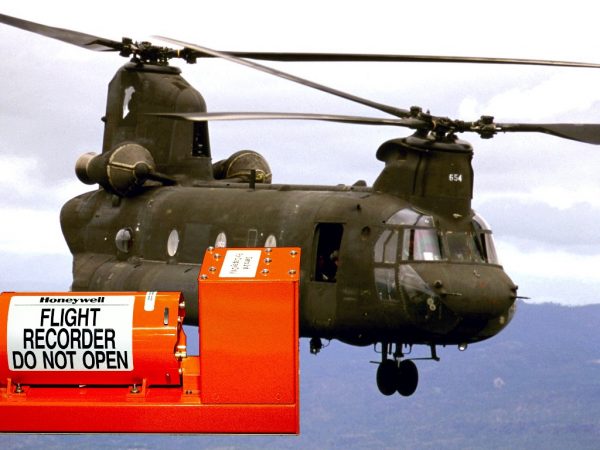 In a scandal bigger than Benghazi, in which 30 Americans lost their lives, including 17 Navy SEALs from SEAL Team Six, the shoot-down of Extortion 17 continues to be masked by cover up. One of the most bizarre indications that a cover up is going on concerning Extortion 17 is the helicopter’s missing black box recorder.

As I have sought, along with others, to revive this story following the release of Don Brown’s book Call Sign Extortion 17: The Shoot-Down of Seal Team Six so that the families of those killed and the American people might get answers to the truth of what happened to that mission, it seems I find more and more people who have never even heard of Extortion 17. Yet, they are more than aware of the media stories about the alleged killing of Osama bin Laden, whose death is attributed to the SEALs of SEAL Team Six.

After working tirelessly for nearly three years, families of the men killed on Extortion 17 finally got a congressional hearing. However, that hearing merely patronized the families without providing any real answers. In fact, it left us with more questions than answers, mainly because those who testified contradicted certain things. Among those things was the subject of Extortion 17’s black box.

Understand that before the congressional hearing, testimony and documented evidence as to what took place following the shoot-down of Extortion 17 was already in hand. We know from Enclosure H documents that there was an unidentified mystery unit (Lima Bravo) that were on the scene of the crash before US Army Pathfinders arrived. However, we don’t know what exactly they did there. This is suspicious as we documented previously that Brown had viewed three autopsy reports from three of those aboard Extortion 17 and they had bullets in their bodies. It’s also suspicious because a black box for Extortion 17 has yet to be recovered.

In fact, what makes things even more suspicious is that the Pathfinders were not allowed to take off until after the unidentified unit had disappeared on an “unspecified road,” which was more than an hour after Extortion 17 went down. They finally arrived at 4:15 am local time.

According to testimony on page 3 of Exhibit 65, the Pathfinders platoon leader testified:

“Just when we touched down and LZ (landing zone) was just starting to get light sir, so we were still moving [in a ] period of limited visibility. I think it was 560 meters from our LZ to the crash site [which] just would have been to the southeast. We moved parallel in the Wadi up to the khalat. The Lima Bravo element was already on scene, I think they beat us [by] about 30 minutes. So… from there I talked to [name deleted] [who] was the GFC ]ground forces commander] at the time. Establish security with them. We [Pathfinders] took security on the north end of the Wadi. They [Lima Bravo] took it on the south and also had an OP [outer perimeter] set up on the high ground to the Southwest of the crash site.”

Brown points out that the platoon leader’s claim of thirty minutes is “way off” and that the “unidentified element had already been on the ground for one hour and eleven minutes, had already begun to identify American bodies, and had already permitted a ‘coalition element’ to conduct a ‘survey of the aircraft’ in the field, and then disappear on an ‘unspecified road,’ all before the Pathfinders arrived.”

This unidentified element was never interviewed for the Colt report.

There was no black box recovered and no survivors from Extortion 17.

First, take into account that Lt. Commander and former Navy JAG officer Don Brown points out in his book that the black box was absent from the Executive Summary. He writes, “The black box did not just disappear from the wreckage of Extortion 17. It also disappeared mysteriously, from the Executive Summary of the Colt Report… This glaring omission, in and of itself, is enough to raise suspicion.”

General Colt never said that the Army did not recover the black box when he began getting questions about it, nor did he say that no black box was on Extortion 17. Rather, he simply referred family members to the report.

In October of 2011, Charles Strange, father of fallen Navy SEAL Michael Strange, recounted that General Colt told him in a meeting in Little Creek, Virginia that “the black box got blown away by the flood.”

Blown away by the flood? Consider that we know several of the black boxes on board flights of planes from the 9/11 attacks were recovered. Consider further that millions, if not billions of dollars and hours were spent looking for the black box aboard Flight MH370, all to no avail. However, the Army is just willing to let a black box that was lost from a Chinook helicopter just get away in a flood? Something doesn’t add up. These things have batteries that ping for months so one can locate them and this happened in a river valley.

The Pathfinders account also seemed consistent with the claims of General Colt.

For two and a half years, the Department of Defense stuck with that story. However, what took place when a congressional hearing occurred in February of 2014? They contradicted General Colt and the Pathfinders and claimed that there was no black box.

Garry Reid, Principal Deputy Assistant Secretary of Defense and Special Operations & Low Intensity Conflict for the US Department of Defense, who was appointed to his post in June 2012 (10 months after Extortion 17 was shot down), told the congressional hearing “Contrary to some unofficial statements, there was no flight data recorder, no so-called ‘black box.’ This equipment is not standard on this aircraft.”

He went on to tell a major whopper concerning the black box. “But the airframe itself is an analog aircraft,” he said. “There is no source of digital data. There is no traditional black box.”

However, Lt. Commander Brown said that in speaking to a US Navy helicopter pilot, he was told that Reid’s claims were misleading. According to Brown, the pilot conveyed that “both analog instruments and digital instruments feed data into the cockpit data recorder (black box).”

Boeing’s own website supports the Navy pilot, not Mr. Reid.

The purpose of an airplane flight data recorder system is to collect and record data from a variety of airplane sensors onto a medium designed to survive an accident. Depending on the age of an airplane, the FDR system may consist of (1) an analog or digital flight data acquisition unit (FDAU) and a digital FDR (DFDR) that may have a tape or solid-state memory, or (2) simply an FDR. The protected medium that collects data from an airplane resides in the FDR or DFDR. This recording system has been installed in thousands of airplanes, and continues to play a key role in making airplane travel as safe as possible.

Furthermore, consider that the Chinook, call sign Extortion 17, was a Vietnam-era helicopter that had been retrofitted for modern times. According to Boeing, “Flight data recorders were first introduced in the 1950s. Many first-generation FDRs used metal foil as the recording medium, with each single strip of foil capable of recording 200 to 400 hr of data.”

Not only that, but Billy Vaughn, father of fallen Navy SEAL Aaron Vaughn, attests that he was contacted by the pilot that actually flew the particular Extortion 17 Chinook to Savannah in 2006 before it began its journey to Afghanistan and both he and his co-pilot specifically remember that there was a black box on board.

Not only were there lies, but Billy Vaughn said that when Rep. Jason Chaffetz (R-UT), who headed the Congressional hearing, failed to ask serious questions to get to the bottom of what happened, “he became part of the cover-up.” His wife Karen had previously tweeted immediately following the close of the hearing in 2014, “Screw the American warrior… but hey, Congress did their job, right?”

So, why the cover up? Was the murder of 30 Americans on board Extortion 17 a tradeoff for Barack Hussein Obama using the alleged death of bin Laden in his 2012 political aspirations? Why are there inconsistent statements by the Army and the DOD? Why did the Congressional hearing not ask the tough questions about the black box, the unidentified unit, the unidentified seven Afghans aboard Extortion 17, the possibility of this being a green on blue attack and the status of the bodies of the unidentified Afghans and SEAL who were allegedly cremated? I can’t help but think that they either 1) don’t care, or 2) they are complicit in the cover-up. It’s time we call and write until they get the message that answers must be given to the families and to the American people for whom they work.