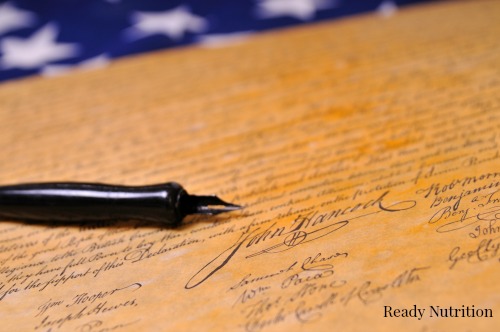 But that brief summation doesn’t quite do justice to what was truly at stake. Our Founding Fathers, were men who understood the world. They were educated, law abiding, successful merchants, farmers and plantation owners. They had made a name for themselves and put all of that on the line to be free from the tyrannical rule from one of the world’s superpowers. It meant risking everything they built during their lifetime to call themselves a patriot. It meant risking losing their family, their fortunes, their honor – everything. They would rather be called a traitor and die a traitor’s death than live under the oppressive ruling of a King.

Would you be willing to do that?

Five signers were captured by the British as traitors, and tortured before they died. Twelve had their homes ransacked and burned. Two lost their sons in the revolutionary army, another had two sons captured. Nine of the fifty-six fought and died from wounds or hardships resulting from the Revolutionary War.

These men signed, and they pledged their lives, their fortunes, and their sacred honor!

What kind of men were they? Twenty-four were lawyers and jurists. Eleven were merchants. Nine were farmers and large plantation owners. All were men of means, well educated. But they signed the Declaration of Independence knowing full well that the penalty could be death if they were captured.

Carter Braxton of Virginia, a wealthy planter and trader, saw his ships swept from the seas by the British navy. Left with no other choice, he sold his home and properties to pay his debts.

Thomas McKeam was so hounded by the British that he was forced to move his family almost constantly. In a letter he wrote to his friend John Adams in 1777, he described how he had been “hunted like a fox by the enemy, compelled to remove my family five times in three months, and at last fixed them in a little log-house on the banks of the Susquehanna, but they were soon obliged to move again on account of the incursions of the Indians.” He served in the Congress without pay, and his family was kept in hiding. He also served in a military capacity during the war  as a volunteer leader of militia.

Vandals or soldiers or both, looted the properties of Ellery, Clymer, Hall, Walton, Gwinnett, Heyward, Rutledge, and Middleton.

An old legend tells the tale of the most inspiring examples of “undaunted resolution” was at the Battle of Yorktown. Thomas Nelson, Jr. was returning from Philadelphia to become Governor of Virginia and joined General Washington just outside of Yorktown. He then noted that British General Cornwallis had taken over the Nelson home for his headquarters, but that the patriot’s were directing their artillery fire all over the town except for the vicinity of his own beautiful home. Nelson asked why they were not firing in that direction, and the soldiers replied, “Out of respect to you, Sir.” Nelson quietly urged General Washington to open fire, and stepping forward to the nearest cannon, aimed at his own house and fired. Luckily, Nelson’s home was not destroyed and still stands today as a memorial of those who bravely fought.

Francis Lewis’s Long Island home was looted and gutted, his home and properties destroyed while Lewis was in Philadelphia attending to congressional matters. His wife was taken prisoner by the British after disregarding an order for citizens to evacuate Long Island and held for several months before being exchanged for the wives of British officials captured by the Americans. Her poor health exacerbated while in detainment and died a few years after being released. The Lewis’s son would later die in British captivity, also.

Months after “Honest John” signed the Declaration, he was driven from his home. His New Jersey home was looted during the course of the Revolutionary War, as well as his fields and his grist mill destroyed (possibly due his status as Speaker of the Assembly). For a short time, had to escape to the mountains and live in caves. Three years after signing the Declaration, he died from battling kidney stones.

New Jersey’s Richard Stockton, was the first to sign the Declaration of Independence and would pay the price.

After making an attempt to rescue his wife and children from advancing British troops, his plan was spoiled and he was captured by Loyalists. He was stripped of all of his property and earnings. When he wouldn’t renounce the Declaration of Independence, he was imprisoned, tortured, beaten and nearly starved. He returned an invalid to find his home gutted, and his library and papers burned. He, too, never recovered, dying in 1781 a broken man.

William Ellery, of Rhode Island, who marveled that he had seen only “undaunted resolution” in the faces of his co-signers, also had his home burned.

Only days after Lewis Morris of New York signed the Declaration, British troops ravaged his 2,000-acre estate, butchered his cattle and drove his family off the land. Three of Morris’ sons fought the British.

When the British seized the New York houses of the wealthy Philip Livingston, he sold off everything else, and gave the money to the Revolution. He died in 1778.

Arthur Middleton, Edward Rutledge and Thomas Heyward Jr. went home to South Carolina. In the British invasion of the South, Heyward was wounded and all three were captured. As he rotted on a prison ship in St. Augustine, Heyward’s plantation was raided, buildings burned, and his wife, who witnessed it all, died. Other Southern signers suffered the same general fate.

Among the first to sign had been John Hancock, who wrote in big, bold script so George III “could read my name without spectacles and could now double his reward for 500 pounds for my head.” If the cause of the revolution commands it, roared Hancock, “Burn Boston and make John Hancock a beggar!”

Here were men who believed in a cause far beyond themselves.

Such were the stories and sacrifices of the America revolution. These were not wild eyed, rabble-rousing ruffians. They were soft-spoken men of means and education. They had security, but they valued liberty more. Standing tall, straight, and unwavering, they pledged: “For the support of this Declaration, with firm reliance on the protection of the Divine Providence, we mutually pledge to each other, our lives, our fortunes, and our sacred honor.”

So, take a few minutes while enjoying your 4th of July holiday and silently thank these great patriots. It’s not much to ask for the price they paid. Remember: freedom is never free!

Information sourced from What Really Happened and US History.org