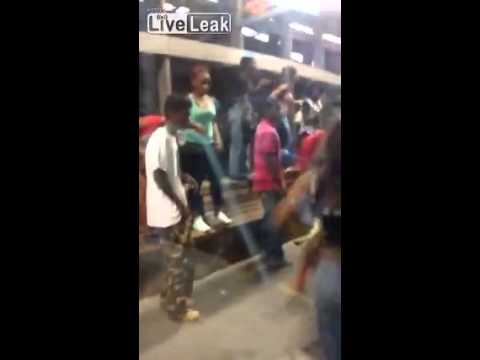 New video out of Cincinnati shows a black mob viciously beating and choking a white man, but police have distanced themselves from an initial explanation that the incident was an “anti-white” attack.

The altercation began in Fountain Square on Saturday night at around 11pm shortly after a music concert and 4th of July fireworks.

The video shows several black teens punching and choking 27-year-old Christopher McKnight, while another individual wearing a red t-shirt appears to be attempting to deter the attackers.

McKnight suffered serious internal injuries and was taken to hospital. Riot police later arrived on the scene and arrested seven young men. Two officers and a bystander were injured during the unrest.

A police report initially stated that the incident was being treated as an “anti-white” racial attack, but Capt. Mike Neville subsequently backed off that explanation, asserting that the beating was not a racial attack.

Another video of the incident appears to show bystanders laughing at and taunting the victim as he lay on the ground unconscious and bleeding.

21-year-old Jy Quynn Britten was also arrested for punching a police officer, despite claims of mistaken identity by his defense attorney.

An eyewitness called Louis asserted that Britten was responsible for attacking the officer, stating, “The guy hit the police officer, his lip busted. Everybody started running, there were fireworks thrown toward the police officers. It was really wild. I don’t know why it was like this, but it was crazy.”

Many are citing the incident as another example of black on white violent crime that has largely been ignored by the mass media, arguing that if the roles were reversed and it was a white mob beating up a black man, the story would be a national issue.

Paul Joseph Watson is the editor at large of Infowars.com