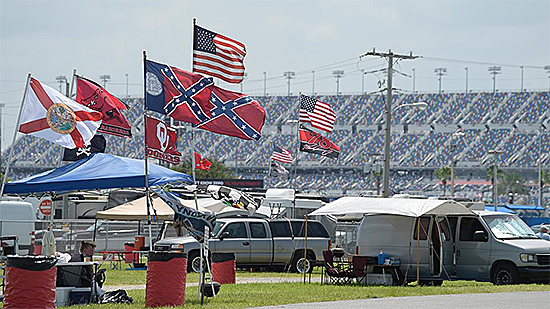 Like much in our country these days, the request by NASCAR and 29 track owners was a knee-jerk, uneducated reaction to a tragedy. There is no other way to describe the request that NASCAR fans not fly or wave the Confederate Battle Flag at their races. I wondered how many would comply with the request. It is hard to say, but it seems that there were not many.

At NASCAR’s first race in the South since the racing series and its tracks urged fans to no longer wave the banner, dozens of Confederate flags were scattered throughout the vast infield.

This could not be a real surprise to the racing organization. NASCAR came short of banning the flag, probably because of fear that attendance would be down as a result. But, it also should be noted that there are only a few in the entire country that believe that the flag stands for racial issues or hate.

The poll shows that 57% of Americans see the flag more as a symbol of Southern pride than as a symbol of racism, about the same as in 2000 when 59% said they viewed it as a symbol of pride. Opinions of the flag are sharply divided by race; and among whites, views are split by education.

The problem that once again has to be shouted from the rooftops. The flag did not insight the violence in Charleston. The young man did not do what he did for the sake of that or any flag. He did what he did because he has a sinful heart. He, like all of us, needs a Savior. Taking down a flag will not stop violence and wickedness. Only the gospel can.

This means that, though many would not choose to fly the flag, they do not think that it is a symbol of hate. It is also hard for many to give up their background. It is difficult to allow someone to strip you of your roots. We all know instinctively that are roots and heritage gives us direction. Without knowing where have been, we will have no reference as to where we should be going.

NASCAR took a stance on the Confederate flag after last month’s South Carolina church massacre. The series stopped short of banning fans from displaying the flag at its events, but Daytona and 29 other tracks asked fans to refrain from flying them.

NASCAR fans, at least at Daytona, have no intention of complying with these race baiters. Those who have always sported the flag know what is in their own hearts. But the question we must ask is, “What happens now?” Will NASCAR or these track owners take a stricter stance? It might cost these fans the price of admission. They may be forced to leave for not complying. Will the fans stand for such thought control?