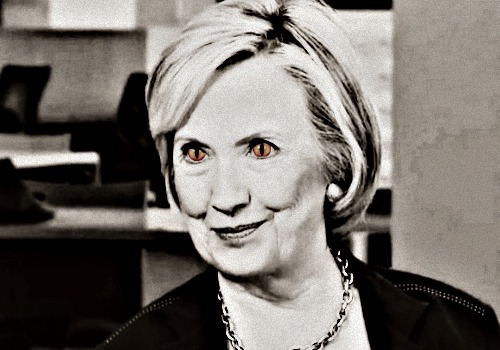 Below are the highlights pieced together from what has been publicized as the first exclusive one-on-one sit-down interview with Hillary since she announced her presidential run.

It’s painful to watch (and not just because it’s Hillary either). It’s like watching someone full-to-bursting with nearly four decades of lies and scandals try to act like a normal person in under five awkward, cagey, and defensive minutes.

When CNN’s Brianna Keilar asks her, “Do you see any role that you’ve had in the sentiment that we’ve seen where people are questioning whether you are trustworthy?”

Hillary responds with that’s just a theme that’s been used against her and her husband for many, many years.

Just a theme used against you guys for many, many years? “Gee, I wonder why that is,” said no one ever (*cough Clinton body count *cough).

But don’t worry, Hillary says she trusts the American voter 100 percent. Probably because all the elections are rigged and there really is only one voter (Bilderberg counts as one vote, and they did put “U.S. elections” on this year’s to-do list).

Then Brianna asks Hillary if Hillary would vote for someone she doesn’t trust.

“Well, I think people should and do…ugh…trust me,” Clinton responds.

Notice the order of those two words. “Should” came before “do”.

Next question… “Can you tell me the story of how you decided to delete 33,000 emails and how that deletion was executed?”

Hillary: “Well, let’s start from the beginning. Everything I did was permitted. There was no law, there was no regulation…”

That’s her immediate, super defensive response to a question about something she did that everyone but apparently her knows is wrong? Wow. Semantic arguments made like a true lawyer.

Again, see question one about being trustworthy, please. People with no moral compass who do things that are common sense wrong and inherently wrong but try to skate by on semantic arguments? Why did she say people should trust her again?

Just listening to her talk for under five minutes takes the zero confidence I didn’t have in her and thrusts it into negative confidence which I didn’t know was possible.

Good Lord, Hillary is scary. And somewhere there are people who are going to vote for her in our sham elections 2016 just… because… she’s female.

Watch the rest for yourself.