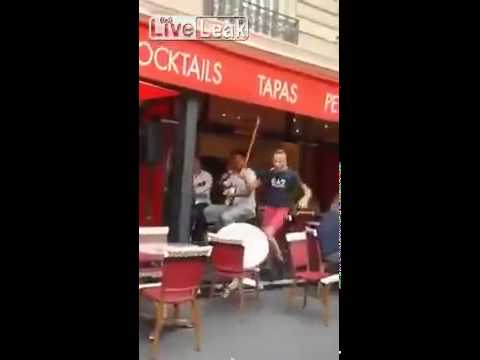 France is a hotbed of Islamic extremism

Video footage out of Paris, France shows a Muslim man screaming at diners to stop eating food “because it’s Ramadan,” before he starts overturning tables.

The individual in the clip is seen pacing around near a restaurant with a hockey stick. He then seizes control of a microphone being used by a musician to lecture people in the cafe and passers-by.

“People can’t eat because it’s the ramadan!,” the man shouts in French before screaming and then overturning tables and smashing glasses. He then proceeds to wave the stick at and physically confront diners.

Ramadan, which is the ninth month of the Muslim calendar, is recognized by Muslims worldwide as a month of fasting and stricter religious observance to commemorate the first revelation of the Quran to Muhammad.

Muslims are required to refrain from eating between dawn and sunset during this time, a practice that the individual in the video clearly believes should be forced on everyone else whether they are Muslim or not.

The fact that France is a hotbed for radical Islam is becoming painfully clear. Following the Charlie Hebdo massacre in January, a man was beheaded near Lyon last month in an ISIS-inspired attack.

A Newsweek poll taken last August found that a staggering 16 per cent of French citizens have a positive view of ISIS. The numbers are even more disconcerting when it comes to youths between the ages of 18-24, of which 27 per cent sympathize with ISIS.