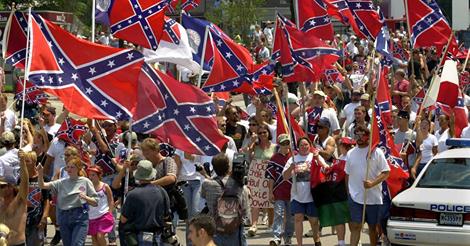 The Confederate flag has now been taken down from the capital grounds in Columbia, South Carolina. Heck, for good measure, they even took down the flagpole. That will show that dumb old flag.

And how everyone cheered the symbolism – because that’s what we do these days. It doesn’t matter that the flag did not kill those nine poor souls in Charleston, how long the flag has been flying, or who put it up there in the first place and why. Americans celebrate the symbolism and congratulate each other for our newly discovered progressive enlightenment. Hooray for us!

That famous American Piers Morgan (not an American) weighed in, saying: “Doing the right thing is to be applauded, however long it takes.”

Regarding why the flag flew for so long, Piers added: “And we all, surely, thought the same thing: why is this flag still a protected species when all it does is remind people of America’s darkest, most evil past and motivate racists like Roof.”

Yes, Piers – that’s what we’ve all been thinking for the past 54 years, as people strolled by the flag, walked by a monument or drove on a street or highway bearing the name of a prominent Confederate. Yes – we’ve all been suffering in silence. Even democrats and leftists (I guess that’s redundant) – because they’re known for their quiet demeanor.

How many Washington politicians and beltway pundits “have spent years driving down Jefferson Davis Highway (Virginia’s Rt. 1, which goes straight through Arlington) and Lee Highway (Rt. 29, which runs south from DC’s western suburbs) and have never made a peep about it until five minutes ago,” asks the Federalist.

Yet now, Democrats and Republicans alike have all of the sudden developed a conscience, like new-age abolitionists. And the country is hailing the new hero of the movement, South Carolina state rep. Terry Horne, who, through her wails of torment, exclaimed: “I cannot believe that we do not have the heart in this body to do something meaningful, such as take a symbol of hate off these grounds on Friday!”

As if having to wait another few days will matter. Heck, as I said; the flag has been flying there for 54 years. Yet, through this faux-ordeal, very few have bothered to explain how the flag got there in the first place, who put it up, and why. And frankly, even fewer, it seems, have bothered to ask. Could it be they want no one to know the truth?

So here are some historical facts to accompany the phony hand wringing.

Virtually all Southern states have been controlled by Democrats for most their history, and South Carolina is no different.

Between the end of the civil war and 1961, the stars and bars had been relegated to the dustbin of history. But the 1954 Supreme Court desegregation decision, popularly known as Brown v Board of Education of Topeka, brought on fresh segregationist sentiment from Dixiecrats (Southern Democrats), who voted to fly the Confederate Flag as a protest to the Brown decision.

And who was the governor who ushered in this new era of racism? It was democrat Ernest “Fritz” Hollings, governor form 1959 – 1963. Just one of many segregationists from the south – everyone a democrat. So go ahead and celebrate how wonderful and enlightened America has become (for a few days) – but just remember who started it all.

And as politicians, pundits, and activists continue to demand that more monuments be taken down and streets be renamed, be mindful of what is really happening. This single event has now morphed into the latest cause-du-jour freight train.

This will not bring us closer – it won’t unite us. It will just, once again, ingrain in the minds of activists that if they make a fuss and whine loudly enough, like a child having a tantrum, they will always get their way. And now that we’ve ventured down this path, they will not stop until the entire heritage of the south is expunged.