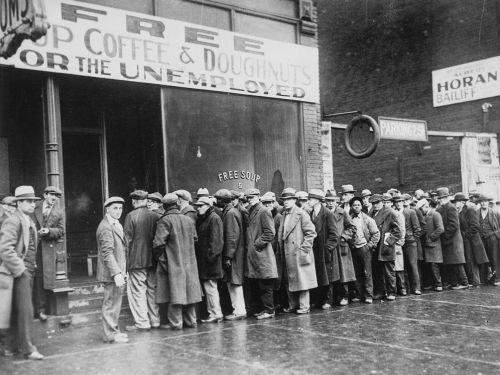 With the fall of China’s stock market and the deteriorating situation in Greece, it seems like the world is preparing to experience another system economic collapse. But as the alternative media has been warning for years, the problems of the last crisis have yet to be truly solved. With the exception of countries like Iceland, who had the foresight to let the big banks fail, most developed countries are still in worse shape than they were before.

Nowhere is this more obvious than in the United States, where roughly 8 years after the housing crash, millions of people are still on food stamps. Which if you think about it, isn’t that the true measure of a nation’s economic health? Can the people actually feed themselves? According to the Free Beacon, many of them still can’t:

The number of beneficiaries of the Supplemental Nutrition Assistance Program (SNAP), otherwise known as food stamps, has exceeded 45 million for 48 straight months, according to data released by the Department of Agriculture (USDA).

In April 2015, the latest month from which data is available, there were 45,438,832 beneficiaries of the food stamp program. 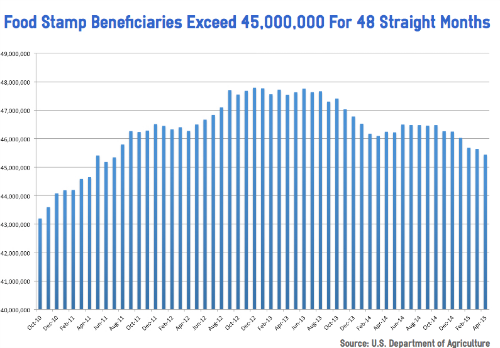 That’s some recovery we’ve had.

We went from having a little over 25 million food stamps recipients before the crash of 2007/08, to almost 48 million a few years later. Now, over 5 years after the “Great Recession” supposedly ended, we’ve barely made a dent in that number.

Should another economic collapse arrive, America’s poor are going to get hammered. They’re barely getting by as it is. Nearly two-thirds of Americans are living paycheck to paycheck, a number which includes many higher wage earners. Can you imagine what it’s like for the 15% or so of Americans that need the government’s help to survive?

A day of reckoning is fast approaching, not only for Americans, but for a world that is swimming in debt and derivatives. When that day comes, just about everyone is going to be taken down a peg. The only question is, what happens to the people who have no more pegs to step down from?