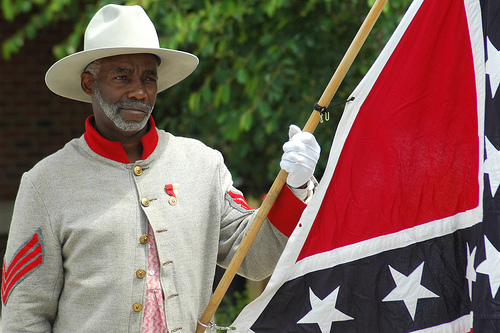 I’m wondering just how the NAACP will spin this one… and the elected politically correct people in the South Carolina State House and governor. Former President of the Asheville chapter of the NAACP, 67-year-old H. K Edgerton gave a little history lesson on the confederacy and demonstrates that blacks were not treated in the fashion that has been prominent in the wake of Abraham Lincoln Marxism in this country.

Edgerton is one of the few black members of the Sons of Confederate Veterans who still believes in what the Confederate Flag stands for, and here’s a hint to cultural Marxists and indoctrinated Republicans, it’s not about slavery.

“All these folks around shouting at me better go find out just who they are,” said Edgerton. “They’re going to find out a lot of their ancestors from South Carolina, fought down under this flag honorably. They can talk about me all they want to, my whole life has been fighting for black folks.”

Of course, many blacks didn’t like what Edgerton had to say, some even calling him the “most ignorant black man” they knew.

Yet, from the looks of them, the ones in the video at WLTX seem to be those from among the ghetto thug culture of Black America.

Edgerton spoke out before the flag was removed saying, “I’m not going to blame it on a Yankee because I’ve seen some southern folk around here that are real questionable too that don’t know anything about who they are and their families and the honorable people in the southland of America, red, yellow, black, white and brown.”

When the NAACP pushed to have the flag removed from the South Carolina State House in 1999, Edgerton spoke out against that too.

Edgerton — a former president of the Asheville NAACP chapter, and a recent candidate for Asheville City Council — says black people should be as proud to raise the Stars and Bars as the American flag, if they know their history. He points out that when Gen. William Tecumseh Sherman took the North’s revenge on the South, his men didn’t distinguish between black-and white-owned homes or crops. And, he adds, after the North whipped the South and freed the slaves, what did the victors do for black folks, besides say, “You’re free and on your own”?

“Abolitionists would have us believe it was only about master and slave,” says Edgerton. “But white folks and black folks were partners in the destiny of the South.”

“Anyway,” says Edgerton, “at the time of the Civil War, slavery was recognized as an institution on its way out, because it was no longer economically viable.”

He also posits that President Abraham Lincoln’s intent was not so much to free the slaves as to save the Union, at any cost. Black and white people would have fared better in an independent Southern nation, argues Edgerton.

He has also blasted the Ku Klux Klan for using the flag in a wrong manner and not the reason for the flag.

“There have been hate groups who have grabbed the flag and run with it,” he said. “They have used it wrongly and have no idea about its real history.”

“The rest of us, including the people of South Carolina, can and should proudly display this flag,” Edgerton added.

And lest one think the Confederate Flag is about hatred and racism, Edgerton wants to set you straight as he blames the media and public indoctrination system (public schools, which the North forced on the South, see On Secular Education) for the ignorance that is rampant not only in the North, but also in the South.

“This is a continuation about the lies of the Christian southern white folks during the Civil War,” Edgerton said. “African Americans in this country don’t know a thing about that war and that time. They see that flag and someone says slavery and it all falls apart and they think of Southern Christian white folks as being evil.”

“We can’t let the stars and stripes get away that easy. Never were the stars and bars flag flown over a slave ship,” he continued. “And you want to know why? Because it’s a Christian Battle Flag that was emulated after St. Andrew, Jesus Christ’s first disciple. In 69 A.D. in Petro, Greece — now a part of Russia — St. Andrew was jailed because of his teaching and preaching of Jesus Christ, his Lord and Master, and he was told he was going to be crucified on the cross. He begged that persecutor not to nail him to that Latin cross in the shape of ‘T’ because he was not worthy of being punished the way Jesus Christ had been nailed. So he begged to be tied in an X-shape to the cross and the persecutor did what he asked him to. That X is a Greek symbol to CH, the first two letters in Christ’s name. When St. Andrew was on the cross he continued his teaching of Christ and all the folks started believing him and for three days he remained on that cross teaching and after three days they begged the persecutor to take him down and when he did, St. Andrew came down off that cross and died, and he became a martyr and a saint.”

“When [Civil War Confederate] General Beauregard decided they needed another flag, he chose the cross of St. Andrew for these reasons,” said Edgerton. “Most Southerners, in fact, did not want to do away with the stars and stripes because they didn’t feel they had done anything wrong. They thought it was the north who was eradicating the Constitution.”

And in case you were indoctrinated that somehow Lincoln was a good guy, Edgerton has a message for you too.

“And as for President Lincoln, our American hero, who signed the Emancipation Proclamation,” he said. “In March of 1861 Abraham Lincoln called all those black leaders in his office and he told them — Even if I set you free you’ll be inferior. You need to get out of the country because I will colonize you. Lincoln proposed the 13th Amendment, being the only President ever to do so. That amendment said Congress would never have the power to interrupt an institution of state. He told the southerners they could keep the slaves if they paid the North a 42% tariff. The South agreed to a 10% tariff but not 42%. So, who I am supposed to blame the institution of slavery on?”

Ah, yes, the truth shall surely set you free, because a Marxist thinker never will. God bless you Mr. Edgerton! You are a man that Dr. Martin Luther King, Jr. spoke about, one who is known by the content of his character. 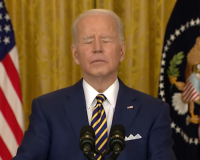