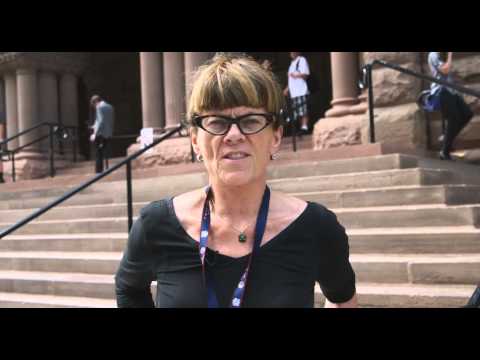 A Canadian man faces 6 months in jail for disagreeing with feminists on Twitter, a case that one journalist warns “could have enormous fallout for free speech.”

54-year-old Greg Elliott could be charged with criminal harassment simply for expressing his opposition to a campaign by activists Steph Guthrie and Heather Reilly to publicly shame a young man in Northern Ontario.

Father of four Elliott was arrested in 2012 and fired from his job as a graphic designer after he opposed Guthrie and Reilly’s plan to generate “hatred on the Internet” targeting the designer of an online video game which allowed players to simulate punching feminist blogger Anita Sarkeesian in the face.

Elliott felt that the two activists’ plot to publicly shame the young man “was every bit as vicious as the face-punch game,” and could cause the young man to commit suicide, urging Guthrie and Reilly not to follow through.

Guthrie and Reilly then claimed that Elliott’s refusal to endorse the plot (he had previously helped Guthrie’s feminist group by offering to design a free poster), represented “criminal harassment.”

Under Canada’s draconian anti-harassment laws, the victim merely has to claim that the offending conduct made them “fear for their safety.”

In other words, if Elliott is convicted, feminists in Canada could claim that anyone who disagrees with or offends them is engaging in “criminal harassment” and demand they be sent to prison.

Guthrie and Reilly also claimed that Elliott was engaging in harassment merely for tagging them in tweets. At no point did Elliott make any remarks directed at the two that could be construed as sexual harassment, hate speech, or violent rhetoric, according to Toronto Police Detective Jeff Bangild.

The very worst comment that Elliott made in reference to the activists was a tweet in which he indirectly referred to the women as “fat” and “ugly”.

The National Post’s Christie Blatchford writes that the ruling, expected to be made on October 6, will have, “enormous potential fallout for free speech online.”

“Basically what he did was disagree politically with these young women….he just disagreed with some of their politics,” said Blatchford.

The notion that someone could be arrested and incarcerated for engaging in vigorous online debate “will have a chilling effect on people’s ability to communicate, and not just on Twitter,” said Elliott’s attorney Chris Murphy.

The astounding thing about this case is that Elliott himself was clearly subjected to harassment by Guthrie and Reilly when the two activists sent him a barrage of hateful tweets. Another supporter of Guthrie and Reilly even pretended to be a 13-year-old girl to try and portray Elliott as a pedophile.

“If anybody was being criminally harassed in this case, it was my client, it was Mr. Elliott,” Murphy told Ontario Court Judge Brent Knazan.

Guthrie and Reilly also met in August 2012 to discuss how they would attempt to disparage Elliott.

“That was a conspiracy to commit a criminal offence … they were conspiring to go out and publicly shame Mr. Elliott,” said Murphy.

This case once again illustrates how politics is downstream from culture. The sewer pipe of social justice warrior mental illness, once restricted to the dark recesses of Tumblr and Twitter, is now infecting law and government – posing a direct threat to free speech.

It’s bad enough that Twitter acquiesces to contrived hate mob outrage and bans prominent anti-feminists from its social media network, but to actually send people to prison for politely expressing disagreement with feminists represents a staggering lurch into unbridled authoritarianism.