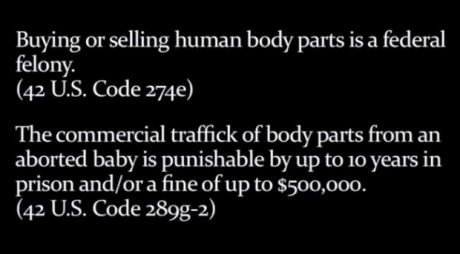 What should be done to a nation that has killed more than 56 million babies and doesn’t even feel bad about it?  And why is the U.S. government giving hundreds of millions of dollars each year to an organization that murders hundreds of thousands of babies, harvests their organs, and then sells them to medical researchers?  An extremely disturbing video that was just released shows a top Planned Parenthood executive coldly discussing the sale of aborted body parts over lunch.  But now that this has been revealed, will America do anything about it?  The purchase and sale of human body parts is a felony according to federal law, and the commercial trafficking of aborted baby parts is “punishable by up to 10 years in prison and/or a fine of $500,000″.  So will anything happen to Planned Parenthood and the executives involved in this illegal activity, or will Planned Parenthood just continue to collect hundreds of millions of dollars from the federal government every year?  I think that we all know that the answer is going to be, and it will be yet another reason why America will deserve every ounce of the judgment that is about to hit this nation.

Dr. Deborah Nucatola is the senior director of medical services at Planned Parenthood.  She has held this position since February 2009, and she is responsible for the medical practices at all Planned Parenthood offices throughout the United States.

In the video that I am about to share with you, Nucatola explains that medical researchers are charged between $30 and $100 per aborted baby part.  The following comes from the LifeSiteNews article that originally broke this story…

While casually sipping wine and eating salad, Dr. Nucatola revealed that she charges $30 to $100 per specimen, and that fetal livers are especially in demand – although “a lot of people want intact hearts these days,” and she has had requests for lungs and “lower extremities.”

Nucatola admitted that Planned Parenthood’s abortionists take great care not to appear to be profiteering off fetal body parts. She said, “They just want to do it in a way that is not perceived as, ‘The clinic is selling tissue. This clinic is making money off of this.’”

If you are not disgusted by that, there is honestly something wrong with you.

We’ve been very good at getting heart, lung, liver, because we know that, so I’m not gonna crush that part, I’m gonna basically crush below, I’m gonna crush above, and I’m gonna see if I can get it all intact.

I’d say a lot of people want liver. And for that reason, most providers will do this case under ultrasound guidance, so they’ll know where they’re putting their forceps.

If you doubt any of this, just watch the original video for yourself…

This is unspeakably evil, and now it has been exposed.

So what will our leaders do?

For now, they are promising to “investigate” and to “conduct hearings”.  The following comes from Fox News…

“Nothing is more precious than life, especially an unborn child,” House Speaker John Boehner said in a statement. “When anyone diminishes an unborn child, we are all hurt, irreversibly so. When an organization monetizes an unborn child — and with the cavalier attitude portrayed in this horrific video — we must all act.  As a start, I have asked our relevant committees to look into this matter.”

Pro-life members of the House held a press conference Wednesday afternoon and likewise backed congressional hearings on the matter. Already, the House Energy and Commerce and Judiciary committees have announced an investigation.

But will anything ever come from this?

I think that we both know the answer.

“At several of our health centers, we help patients who want to donate tissue for scientific research, and we do this just like every other high-quality health care provider does — with full, appropriate consent from patients and under the highest ethical and legal standards,” Planned Parenthood spokesman Eric Ferrero said.

And of course Barack Obama, Hillary Clinton and countless other politicians will rally around Planned Parenthood and insist that nothing illegal has taken place.

But the evidence tells a different story.  The following comes from a Fox News article…

The Center for Medical Progress offered a swift refutation to Planned Parenthood’s response – by posting the full and unedited video.

Great evil is being done all across our nation, and the U.S. government is knowingly funding it.

Now that this evil has been exposed, we have a choice.  We can repent and put an end to it, or we can look the other way and continue with life as normal.

In the end, I have a feeling that our “leaders” will huff and puff about this for about 48 hours or so but then conveniently forget all about it.

And even though the blood of more than 56 million babies has drenched our soil, most Americans have quit caring about the “issue of abortion” long ago.

When judgment comes to America, we are going to deserve every bit of it.

The blood of tens of millions of precious babies is crying out to the heavens, and there will be justice soon – you can be assured of that.

To end this article, I would like to share some facts about abortion that I shared in a previous article entitled “19 Statistics About Abortion That Every American Should Know“.  Please share this list with as many people as you can…

#1 In a massacre that is almost unspeakable, more than 56 million American babies have been murdered in the United States since Roe v. Wade was decided in 1973.

#2 When you total up all forms of abortion, including those caused by the abortion drug RU 486, the grand total comes to more than a million abortions performed in the United States every single year.

#3 The number of American babies killed by abortion each year is roughly equal to the number of U.S. military deaths that have occurred in all of the wars that the United States has ever been involved in combined.

#4 Approximately 3,000 Americans lost their lives as a result of the destruction of the World Trade Center towers on 9/11.  Every single day, more than 3,000 American babies are killed by abortion.

#5 About one-third of all American women will have had an abortion by the age of 45.

#6 Approximately 47 percent of the women that get an abortion each year in the United States have also had a previous abortion.

#7 It has been reported that a staggering 41 percent of all New York City pregnancies end in abortion.

#8 Approximately 78 percent of all abortions in New York City are performed on African-American and Hispanic babies.

#9 According to Pastor Clenard Childress, approximately 52 percent of all African-American pregnancies now end in abortion.

#11 About 18 percent of all abortions in the United States each year are performed on teenagers.

#12 One very shocking study found that 86 percent of all abortions are done for the sake of convenience.

#13 According to the Guttmacher Institute, the average cost of a first trimester abortion at the ten week mark is $451.

#14 Many insurance companies now prefer abortion because the average cost of a vaginal birth with no complications in the United States is now over $9,000.

#18 Planned Parenthood gets more than 400 million dollars from the federal government each year.

#19 Overall, there have been well over a billion abortions performed around the world since 1980.