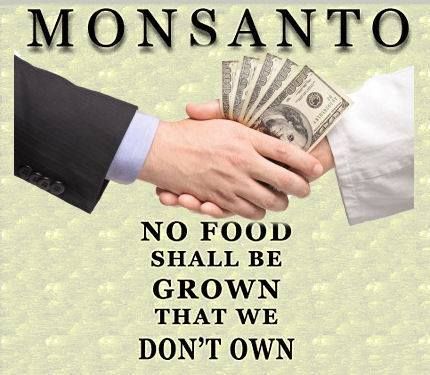 On Tuesday, US food companies and Monsanto sealed a critical victory as the House Agricultural Committee approved a measure that bans the mandatory labeling of genetically modified foods and prevents cities and counties from banning GMO crops within their jurisdictions. Several counties in California and Oregon already have bans in place, and this threatens those restrictions. The measure also paves the way toward preventing food companies from even telling you that their food is GMO free.

While dozens of countries around the world ban GE crops and have ousted Monsanto after citizens protested, petitioned, and took to the streets, the United States seems to want to do everything it can to keep its citizens in the dark about what they are actually eating. Americans clearly want labeling that presents them with accurate and consistent information about what is in their food. As it stands right now, each state has a different method of GMO labeling and some have none at all. Farmers and food manufacturers cannot keep up with 50 different standards. Maine has already passed a law requiring labeling GMO products, and those labels would be prohibited if this bill is upheld in the Senate.

Opponents of GMO labeling state that it would raise food prices and trick consumers into thinking that the GMO-free foods are safer, more nutritious, or otherwise superior to the foods including GMO ingredients. Farmers say that it will be impossible for them to feed the US population by 2050 if they are not permitted to cultivate GMO crops. They say that GMO crops are more resistant to pests and disease, require less land, and are hardier than their GMO-free alternatives. Farmers, already struggling to compete with factory farms and corporations, are facing an ever increasing number of laws and regulations governing how they acquire their seeds, treat their crops for disease and pests, and harvest and store our food.

When society shifted from an agrarian economy to an industrial economy and outsourced food production from the family farm to the farmer or corporation, the quality of our food changed forever. It became someone’s job to produce the largest tomato. It became someone’s livelihood to reduce their costs any way they could. It became much more important to control pests and disease because instead of losing 5 bunches of grapes a week, a farmer could lose thousands of bunches of grapes a week. The farm that produces the best yield survives, the farm that can’t will be eliminated.

Is this when consumers lost the right to know what was in their food? Was it when society elected to stop farming for one family at a time and farm for the masses? Or was it when one giant company controlled practically all of the seed stock in the world? Or was it when the government let themselves be bought by giant companies more interested in profits than in consumer choice and safety?