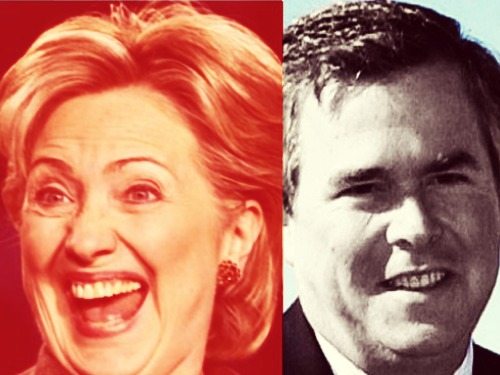 Right now, it’s become glaringly evident to anyone paying attention that we’re either stuck with Hillary or Jeb in 2016.

“By and large, Wall Street so far appears to be betting on a 2016 presidential race that pits former Florida governor Jeb Bush against former US secretary of state Hillary Clinton, based on tallies of fundraising reports as of July 15 that revealed plenty of money from bank employees and financiers,” Quartz recently declared.

The big six megabanks and Wall Street are putting all their money behind Clinton and Bush, and since these people and corporations got to where they are by betting on rigged games over the years, they should all be experts at it by now.

The Guardian reported, “Hillary Clinton and Jeb Bush, the 2016 presidential candidates leading the money race in the Democratic and Republican fields, are amassing fortunes that will leave them politically indebted to some of the most influential lobbyists in Washington.”

Meanwhile, Billionaires like Manhattan Grocery Store mogul John Catsimatidis has proudly donated the personal limit to both Jeb and Hillary. “I’ve been friends with both of their families for many, many years. They both love America, and I’d be happy if either of them won,” he told the Washington Post.

And he’s not the only one. Via WAPO:

The billionaire is one of at least 60 donors hedging their bets heading into 2016 by giving to presidential campaigns of both parties, an Associated Press review of federal campaign finance records found. While those contributions totaled only about $300,000, they are an odd wrinkle of presidential politics in a race expected to see 22 candidates vying for billions of dollars in contributions.

Even if the average American’s vote counted (which, is highly doubtful for a number of reasons, the least of which is voter fraud and voter machine tampering), the average citizen’s contributions are far and away overshadowed by billionaires and corporations.

Jeb and Hillary have raised so much money for this coming election at this point that it can barely be called an “election” anymore; through everything including Super Pacs, over $60M in Hillary’s case and over $110M in Jeb’s have been raised. It is rumored Jeb’s goal is $1 billion. Hillary’s goal is a whopping $2 billion.

The bottom line is that America has two unofficial dynasty families, and we’re currently watching a new member of one of these families ascend the presidential throne.

Worse, they have the same billionaires backing them and the same corporations with the same globalist agendas backing them both, because they obviously realize that no matter which one we get for our next President, we are rest assured that everything will be business as usual. They are basically a face for the same system who will do whatever their told as this country continues to get flushed down the toilet.