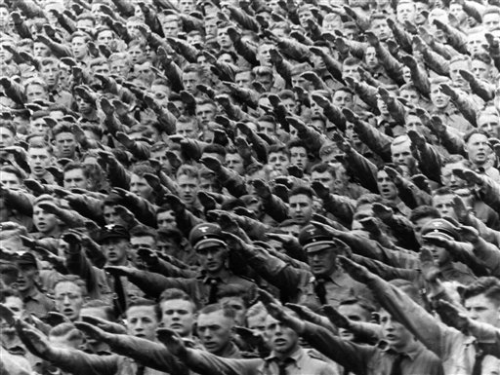 As America continues to descend into a vicious police state, many have wondered how it all came to this. The easiest answer to that question, is that we let it happen. No matter how brutal a regime may be, tyrants never come to power unless they gain the approval, or at least the indifferent consent of their people.

So the real question is, how come so many people seem absolutely complacent in the face of our crumbling cultural values, and the steady march of tyranny? Even worse, how can so many people revel in it? It seems like the number of people who truly value freedom are severely outnumbered by idiots and power tripping busybodies. Granted, the number of people who want to be free has grown in recent years, but they’re still few and far between when compared to the glut of grovelling masses that we share the world with.

Here’s the awful answer to that question, and the dirty truth that most people can’t bring themselves to admit to. Most people love freedom, but only as an idea. They like the idea that they can do whatever they want, they admire the archetype of the rugged individualist, and everyone loves underdogs and rebels. In other words, people love the banners and symbols of freedom, but do they love freedom in practice?

I would argue that no, many of them don’t. As strange as it may sound, most people really struggle with having freedom. Let me provide an example, of which there are many in the field of marketing.

In the year 2000, two psychologists conducted a study on how the number of choices we have effects our behavior. They went to a supermarket and displayed 24 different gourmet jams on a table, and provided $1 coupons to see how much interest it garnered. They did the same thing the next day, but instead of 24 jams, there were only 6. The large display attracted much more interest, but the small display generated 10 times as many sales.

Maybe you think that study is inconsequential, and I wouldn’t blame you for thinking that, but let me share another case that will clarify my point. One of the psychologists who conducted that study, did another study on the differences between end of life care in the United States and France. She interviewed parents in both countries who had children on life support. In France, the doctor makes the decision as to whether or not a child is taken off life support, and in the United States it is the parent’s decision.

She talked to these parents a year after their children had died. The American parents were much more distraught over their decision to pull the plug. They still had nagging doubts about whether it was the right decision to make, and they felt like they had “executed” their children. The French parents on the other hand, didn’t feel nearly as bad about the situation. They were well on their way to coping with the tragedy.

The point I’m trying to make here is that most people don’t like having choices, despite how much they’ll argue to the contrary. The more choices they’re given, the more likely they are to not like the choices they have or make. There’s much more doubt about whether or not that choice was correct, which leads to some pretty counter-intuitive conclusions. You can measure how free you are by the number of choices you have, and most people claim to love freedom, but in many cases those people are happier when they have fewer, or no choices. I think most people are simply happier without freedom, which is unfortunate and sad to say the least.

And that is why so many people accept tyranny, and why it will always be a problem for the human race. Because tyranny is so much easier than freedom. It is acquiescence. It means giving up. Tyranny is for quitters, and it amounts to handing over the reins to someone else.  Most people are happier when they don’t have a choice, and they don’t even realize it.

However, there is another way to look at this odd human behavior.

And that right there is an example of people who truly want freedom, and not just the rosy idea of freedom. Those who truly want freedom are willing to accept the painful struggle of having a choice in life, and prefer it to the ignorant bliss that comes with not having a choice. However, it was only applicable to that particular situation. Would those same parents prefer to have a choice in every other aspect of their lives?

Unfortunately, that kind of person is a rare bird these days. If you could ask everyone in the world about their ethics and political beliefs, you’d probably find a wide variety, but most of them would have one thing in common. There’s always some part of their lives that they are willing to relinquish to a “higher authority,” and that part differs depending on their ideology. Most people don’t really want the full freedom package.

So it’s up to the rare few who really want freedom, without compromise, to make it a reality for themselves. The human race will always teeter on the edge of a tyrannical abyss, because there is an inherent weakness in our species. We’re happier when we don’t have so many choices (or freedom), which means that accepting tyranny is easy for us. It takes all our strength and moral fiber to rise above it, because we default towards tyranny (which is defined by the lack of choice in our lives) when we stop caring. It’s our natural inclination.

But do you really want that? Do you have the strength to make that choice?