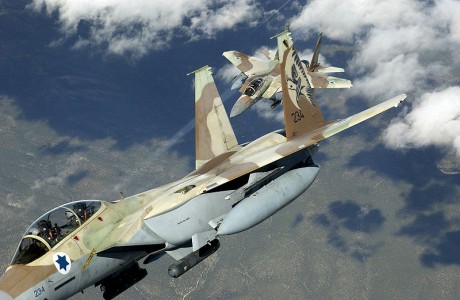 Thanks to Barack Obama, it is only a matter of time before Israel feels forced to conduct a massive military strike against Iran’s nuclear program.  When that happens, Iran will strike back, and hundreds if not thousands of missiles will rain down on Israel.  This exchange will likely spark a major regional war in the Middle East, and that could end up plunging the entire planet into chaos.  If Barack Obama was attempting to prevent such a scenario from playing out, he failed miserably.  Personally, I think that the deal that was just made with Iran is absolutely horrible.  Perhaps you disagree.  Perhaps you believe that it is the greatest piece of diplomacy of all time.  But it doesn’t really matter what any of us think.  If this deal was going to work, it had to be strong enough to convince Israel that Iran’s pursuit of nuclear weapons has been completely stopped.  Israeli Prime Minister Benjamin Netanyahu has sworn that he will never, ever let Iran get a nuclear weapon, and he has pledged to use military force if necessary.  So what Barack Obama needed was a deal that would calm Israeli nerves while satisfying the Iranians at the same time.  Such a deal may have theoretically been impossible, but that is what it was going to take to prevent war.  Instead, Obama has made a deal which has utterly horrified the Israeli government.  Israeli Prime Minister Benjamin Netanyahu even called it “a license to kill“.  So now the odds that war will happen have gone way up, but Barack Obama is too busy congratulating himself to notice.

And it isn’t just the Israeli government that has responded very negatively to this deal.

One recent survey found that a staggering 74 percent of Israelis do not believe that this deal will prevent the Iranians from developing a nuclear weapon.

But in the end, those methods will almost certainly not be enough.  At that point, the Israeli government will have a decision to make, and I think that the following exchange between Netanyahu and Steve Forbes gives us some insight into what Israeli officials are thinking right now…

BENJAMIN NETANYAHU: I think if the deal goes through we’re in danger of war, and it might be the worst kind of war we can imagine. Because this deal will open the way for Iran not to get a bomb but many bombs. Within a decade it will be free to enrich uranium on an unlimited basis. And it will be able to make the fissile core for dozens of bombs–indeed, hundreds of bombs–which it can then put on the hundreds of ICBMs it already has.

Under this deal Iran is going to get $100 billion to $300 billion, which it will be able to use to fund its terrorism and its aggression in the region–its aim being to destroy Israel. Given Iran’s history of aggression, I’d say that this double bonanza of a guaranteed pathway to a nuclear arsenal and a jackpot of money to continue its aggression actually makes the danger of war, even nuclear war, a lot greater.

SF: You make a very important point. Even if Iran sticks to the deal, which is highly problematical, in a decade it will be a major global nuclear power, and it will have ballistic missiles.

BN: Iran is producing them, and guess what?  Within a few years they will be able to reach the Eastern seaboard of the United States. And then every point in the United States. But this deal will also enable Iran to tip those missiles with nuclear weapons, with atomic bombs. And I think it’s a huge mistake to allow the foremost sponsor of terrorism in the world, Iran, to have nuclear weapons, as well as the capacity to give such weapons to its terrorist surrogates. This is a big, big mistake. Not only endangering Israel and the entire Middle East but the entire world, specifically the United States.  The mullahs, the dictators in Tehran, they call us the little Satan; they call America the big Satan. You are their ultimate target, and you should not give such a terrorist regime the weapons of mass destruction.  Because I think the greatest danger facing our world is the marriage of militant Islam with nuclear weapons. Here you have a militant Islamic state, Iran, arming itself with nuclear weapons and receiving a huge cash bonanza in the bargain.  That’s a mistake.

Let there be no misunderstanding – as long as Benjamin Netanyahu is in power the Israeli government will never, ever allow Iran to build nuclear weapons.

This deal that Barack Obama just made with Iran guarantees the Iranians a path to a nuclear weapon, but the Obama administration is apparently hoping that regime change will happen before that time if they are able to kick the can down the road far enough.

But the big mistake that almost everyone in the western world is making when analyzing this deal is that they are assuming that the Iranians will actually keep their promises.

Just like the U.S. government, the Iranians have a very long track record of blatantly lying.  And they were caught lying even in the midst of these recent negotiations.  The National Council of Resistance of Iran produced evidence that the Iranians were enriching uranium intended for nuclear weapons at a site known as “Lavizan-3” just outside of Tehran.  But even after this information came out, the Iranians and the Obama administration just continued with their negotiations as if this facility did not exist.

This is how utterly incompetent the Obama administration is.  The Iranians were hiding things and blatantly lying to us before the negotiations were even completed.  And the truth is that it is possible that Iran might already have developed nuclear weapons.

Let us hope that this is not the case, but if reports about Lavizan-3 are accurate, the Iranian nuclear program may be far more advanced than any of us have been led to believe.

Sadly, most people in the western world end up believing what they want to believe about Iran instead of what the facts on the ground actually tell us.

Not too long from now, I believe that we will see some sort of “trigger event” which will motivate the Israeli government to finally conduct a massive military strike against the Iranian nuclear program.  Israel has a history of conducting these kinds of assaults, and the Israeli military has been preparing for just such an attack for a very long time.  The following comes from a recent article by Joel C. Rosenberg…

Israel has used surprise military force twice to neutralize foreign nuclear programs. In 1981, the Israeli Air Force attacked and destroyed Iraq’s nuclear facilities. Then in 2007, the Israelis attacked and destroyed a Syrian nuclear facility being built with the help of the North Koreans. An attack on Iran’s facilities would be far more complex, and the possible retaliatory blowback could be horrendous. But yet, the Israelis certainly have the capability to do what they need to do, and they’ve been preparing for years for that moment. Given Israel’s historic track record, it is possible Israeli leaders will come to the point of feeling they have no choice but to launch attacks on Iran.

And just because Iran has made a “deal” with us, the American people should not assume that we have now become “friends” with the Iranian government.

In fact, the president of Iran recently led a march through the streets of Tehran during which the crowds were chanting “death to America”…

“Even over the weekend, as Iran continued to receive more and more concessions at the negotiating table, Iranian President Rouhani led a march of hatred in the streets of Tehran in which the masses cried, ‘Death to America! Death to Israel!‘” Netanyahu said, describing Iran’s recent “Al Quds (Jerusalem) Day” in an address to the Knesset Monday.

What a horrible thing to want.  Even though I am very pro-Israel, I would never wish death to Iran.  The Iranian people work hard, they take care of their families, and most of them want peace.

Unfortunately, Iran is run by a cadre of radical Islamic nutjobs that are obsessed with wiping the nation of Israel off the face of the planet.

For a long time, Israel and Iran have been on a collision course, and now time is running out.

War is coming to the Middle East, and it is going to be absolutely horrifying.

So who will ultimately be victorious in this coming war?  Please feel free to share what you think by posting a comment below…