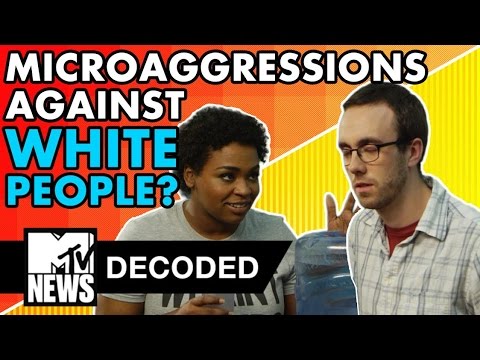 MTV is continuing its crusade to mainstream tumblr/social justice warrior insanity with a new video that targets white people for “racial microaggressions” directed against people of color – awful things such as… saying you like black culture.

These so-called “racial microaggressions,” which are also being circulated at major Universities throughout the country, include the following according to MTV (when applied in reverse to people of color);

– Asking where someone is from;

– Complimenting someone on their English;

– Complimenting black people on their hair;

– Saying a person of color looks like someone else;

– Saying a person of color is “pretty”;

I’m wondering if the fact that black people are responsible for 50% of homicides in the US despite making up only 13% of the population counts as a “microaggression” too?

This video is of course part of MTV’s descent into social justice warrior cult of victimhood insanity, where “white people” are to blame for all of America’s ills.

Earlier this month we also highlighted MTV’s new documentary White People – produced by an illegal immigrant – which shows young white Americans crying on camera over their “white privilege”. The film also publicly shames whites for “what they’ve done in America”.

Numerous people in the comments below the “microaggressions” video completely ripped the entire premise of the clip apart.

“This is f**king dumb. I’m Cuban, and when people find out they frequently are surprised “but you look so white, how can you be Cuban?” wrote Adam Tarnoff. “It’s not a microaggression, I don’t cry to tumblr about my made up first world problems. This is tumblrisms being made mainstream.”

For those who don’t know, tumblr is a repository for all whiny social justice warrior liberals who are offended by anything and claim special snowflake victim status for literally everything conceivable.

“I’m Hispanic and I am so f**king sick of all this anti-White bulls**t,” wrote another commenter. “I, as a Hispanic, have faced more stereotypes and racism (and I mean ACTUAL racism) from Blacks, Asians, and other Hispanics than I have from White people. As a matter of fact, White people are more respectful than other “people of color” when it comes to race.”

The irony of the video is that it’s foundation is the notion that “microaggressions,” which in reality is just a racially souped up name for “stereotypes,” cannot be used against white people, when in fact the video itself illustrates a number of stereotypes that could be applied to white people.

As highlighted in the video below, millions of Americans are apparently committing these “microaggressions” on a daily basis with no idea of what the word “microaggression” even means.

“Everyone is super racist, sexist and prejudice even though they think they aren’t and you have no proof that says otherwise. As a matter of fact, no proof is even better than proof… because it’s already like proof anyhow. So shut up and don’t express a different opinion than mine,” writes Steven Crowder.

According to the University of Wisconsin (Stevens Point), all of the following traits are also examples of racial microaggressions;

– Telling someone they speak good English.

– Telling someone that you have several black friends.

– Saying that you’re not a racist.

– Complimenting an Asian person by telling them they are very articulate.

– Asking an Asian person for help with science or math.

– Uttering the phrase “There is only one race, the human race.”

– Saying that you think America is a melting pot and that when you look at someone you don’t see race.

– Believing that the most qualified person, regardless of race, should get the job.

– Thinking that every person, regardless of race, can succeed in society if they work hard enough.

– Telling a black person who is being too loud to be quiet.

– Telling an Asian or Latino person who is too quiet to speak up.

– Mistaking a person of color for a staff member when you’re in a store.

– Doing an impression of someone’s dialect or accent.

Basically, if you’re nice to people of color or if you innocently ask a question meant with the best of intentions that causes offense, you’re a racist. And don’t try and deny that you’re a racist because that only proves that you are a racist.