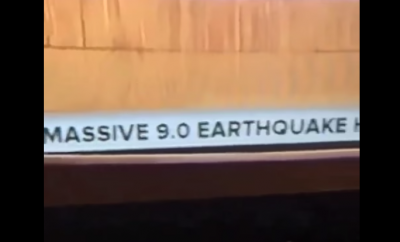 (INTELLIHUB) — On July 10th, 2015, the NBC Today Show news ticker announced that a massive 9.0 earthquake had struck the Bay Area in California, according to a video published on YouTube.

The problem? No earthquake hit California on July 10th and no 9.0 earthquake has hit California in recent history. While many will claim that this was a simple error (and it may have been) one has to wonder how something like this could happen by accident considering someone at the Today Show had to have actually typed the news alert into their system which is not something done accidentally.

Interestingly, in the last month there has been a marked increase in warnings and chatter about a mega earthquake hitting somewhere along the West Coast. From talk about an earthquake triggering a massive tsunami in the Pacific Northwest to claims that the “big one” could hit any time in California, there has clearly been a huge uptick in earthquake reporting both in the mainstream and alternative media.

After a 4.0 earthquake struck the Bay Area on Tuesday Morning, a USGS scientist told the local CBS affiliate that the big one could hit, “any day now.”

“The population is now 100 times bigger in the East Bay, so we have many more people that will be impacted,” said Tom Brocher, a research geophysicist with the USGS.

“We keep a close eye on the Hayward Fault because it does sit in the heart of the Bay Area and when we do get a big earthquake on it, it’s going to have a big impact on the entire Bay Area,” Brocher said.

While a 2008 report put the probability of a 6.7-magnitude or larger earthquake on the Hayward-Rodgers Creek Fault system over the next 30 years at 31 percent, Brocher said the reality is a major quake is expected on the fault “any day now.”

A detailed report published in the New Yorker on July 20th set off a flurry of articles in the mainstream press detailing the horrors of a possible earthquake decimating the Pacific Northwest. In a now viral article, Intellihub Founder Shepard Ambellas detailed the claims made in the New Yorker piece as well as comments made on Fox News in response to the report.

“Our operating assumption is that everything west of Interstate 5 will be toast,” a FEMA official told Kathryn Schulz of the New Yorker. “When the next full-margin rupture happens, that region will suffer the worst natural disaster in the history of North America.”, Schulz wrote about an anticipated future mega-quake.

“The worst natural disaster in the history of America is coming […] if I lived right now in the Pacific Northwest I would be considering moving — seriously,” Fox newscaster Shepard Smith warned his audience before going on to explain how a“colossal earthquake and […] tsunami” will likely strike the Pacific Northwest in the not too distant future.

“They [scientists] are all in agreement, it is absolutely coming,” said Smith, “a wall of water […] up to a hundred feet high and up to seven-hundred feet across.

“Houses […] dump-trucks […] schools” will be washed away, “thousands and thousands will not escape.”

With the Today Show possibly using predictive programming in advance of what authorities believe will be a massive earthquake, one has to wonder if the American people are being prepared for the inevitable.

What do you think? Is a major earthquake going to strike the West Coast in the near future?