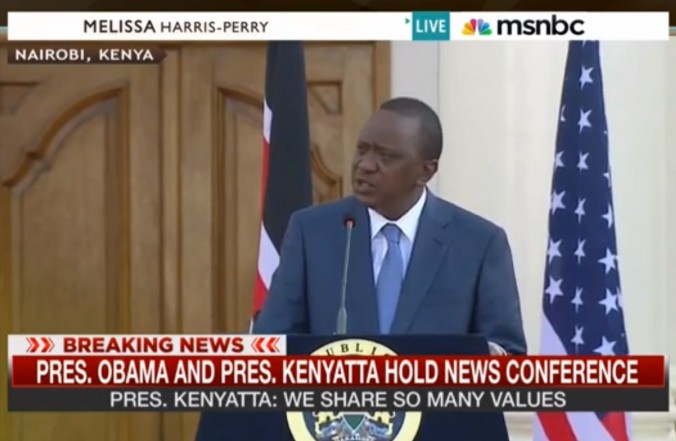 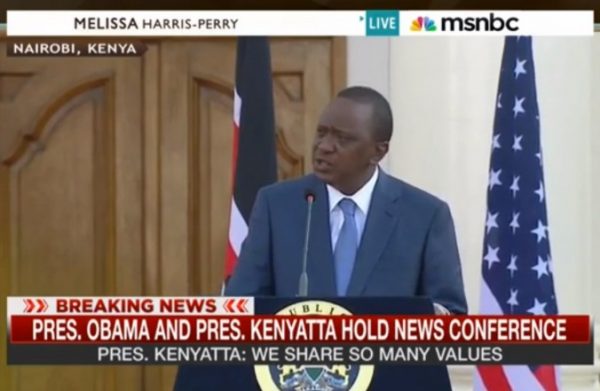 “We need to speak frankly about these things” says President Kenyatta in response to Obama’s statement that Kenya must share the same values as the United States on sodomite rights issues.

Kenyatta, at the press conference Friday morning in Kenya, snubs Obama and continued showing zero tolerance to Obama’s belaboring trying to impose the typical ‘gay rights’ agenda. He quickly slapped down Obama’s suggestion to impose his evil agenda on the African country saying “there are some things we do not share”.

The ‘gay rights’ Kenyatta insisted “our culture and our society do not accept”. “its very difficult for us to impose on people that [homosexuality]”. Watch his heroic stand:

Watch the ‘persona non-grata’, Obama prior to Kenyatta’s response trying to arm twist Kenya on his sodomite rights nonsense:

Instead of lecturing Kenya, perhaps Obama needs to lecture his own brother Malik Obama after watching him on this leaked video confessing (see 00:58) how he purchased an underaged sex slave-girl:

In fact, there are multiple claims against his half-brother. Lost in these shocking discoveries, however, has been Malik’s preference for multiple wives. At least one of these wives was both purchased and underage. In light of the overwhelming evidence that Malik works for the Government of Sudan and Omar al-Bashir, a State Sponsor of Terrorism and international criminal respectively; he received illegal and preferential treatment from the IRS via Lois Lerner; and he is wanted for questioning by the government of Egypt, we thought it relevant to draw your attention to another sordid aspect to Malik’s activities.

Sheila Anyango, 35 years younger than Malik also reported by Andrew Malon of the Daily Mail by Sheila Anyango herself:

“Sheila Anyango, 35 years younger than her husband, told me this week that marrying him was the ‘worst decision’ of her life—and confirmed that they had ‘kept a secret’ since she was 17.”

Another one of Malik’s “wives” managed to escape from him:

“Hafsa Abwanda, now 33, also married the politician as a teenager, but escaped in 2008 after five years of marriage.”

Several members of the family testify that Malik has at least twelve wives in total and continually lures young, underage girls, which even based on Kenyan standards, is illegal.

In addition to marrying girls who are underage, Malik allegedly has several wives. Hafsa Abwanda, Malik’s wife, stated that…

“…she saw at least 12 come and go over the years. With Islam allowing only four wives, former wives and friends say Malik flouts this limitation by ‘rotating’ his spouses out to other properties so he lives with only the maximum number at any one time.”

Here is a video report featuring Hafsa Abwanda, who also claims that Malik has an affinity for wife-beating:

Of course, wife-beating is encouraged by Malik’s grandmother, Mama Sarah Obama, who – according to the U.K. Guardian – said the following:

“The wives that are disobedient, they should be beaten.”

Obama should start with his own family before he jumps on Kenya to sell his immoral agenda.