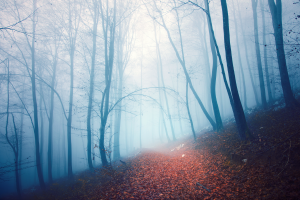 Not to sound like a braggart, but there aren’t very many things in this world that genuinely scare me. I don’t have any phobias, I don’t worry about serial killers when I leave the house at night, I’m not terrified of being eaten by animals when I go into the woods (though I remain cautious), and when things go bump in the night, ghosts and demons do not come to mind. In other words, I’m no scaredy-cat.

But I have a confession to make. There is only one thing that keeps me up at night from time to time. It’s the stories from the book series titled “Missing 411.” That title may sound innocuous, but I assure you that if you read some of the stories within, you’d lose sleep too.

The books are written by former San Jose Police Detective David Paulides. He’s spent thousands of hours researching numerous cases of people going missing in America’s national parks and national forests. However, the cases he talks about are not ordinary. To be frank, they are downright bizarre, and they defy all explanation. These are cases that can’t be explained as being caused by accidents, animal attacks, or even criminals.

Even people whose minds are a little too open, and jump to conclusions like “aliens did it” or “it must be Bigfoot,” are often at a loss for words when they hear about these cases. In fact, Paulides makes a point of not trying to pin a suspect for these missing people. These stories are just too baffling to jump to any conclusions. They kind of make your brain hurt when you think about them.

Most of the cases involve children, and they have many chilling similarities. The kids often disappear out of thin air, sometimes just a few feet away from their parents, and close to numerous witnesses. Sometimes they are found several days later in perfect health, with no memory of the events that transpired. Other times they are found dead, vast distances from where they went missing, over terrain that most adults would struggle with, and in inclement weather.

Some of these people vanish, only to show up hours or days later in areas that search and rescue teams had combed over numerous times before. Sometimes, they’re never found, even though the plausible search area is small and there are an abundance of professionals looking for them.

But it’s the similarities in these cases that leave you dumbfounded. They’re so random and yet so consistent. These people almost always disappear right before record breaking storms show up, almost as if the “thing” that’s taking them knows that it’ll stifle search efforts. The missing are usually children, and they’re always wearing bright clothing. There are physical features of the landscape that show up all the time as well. These people often go missing around berry bushes and granite rocks, and when they’re found, it’s usually in dry creek beds. There are also certain parks that are hotspots for this activity, such as Yosemite National Park, which has racked up a shocking number of disappearances.

When you read one of these stories, you know it’s strange, but when you find the similarities between all of them, of which there are hundreds, you can’t help but feel that that something incredibly mysterious and scary is at work here.

What makes these cases extra spooky, is the reaction of the National Park Service, law enforcement, and the media. As strange as it may sound, the Park Service doesn’t keep any official record of the people that go missing in their lands, which is totally unheard of. In some of these cases, evidence has been withheld from the families by the police and the media, or they’ve been outright lied to.

But after reading these stories, you almost can’t blame them. When you see how they investigate them and respond to scrutiny, you get the sense that even they have no idea what’s going on.

Fortunately, people like David Paulides are working hard to raise awareness. He’s appeared on numerous radio shows, podcasts, and newscasts, both mainstream and alternative. A cursory Youtube search will yield hundreds of chilling interviews with him. Right now he’s working on a documentary and is trying to raise money on Kickstarter for the project. Check out the trailer that his production team has made (which features a few familiar faces) and good luck getting any sleep tonight.