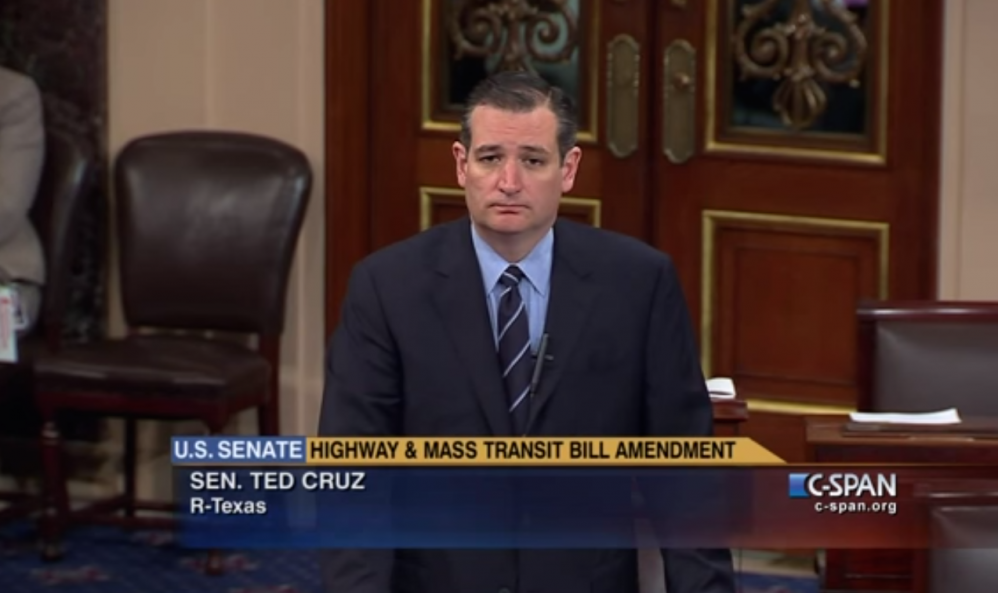 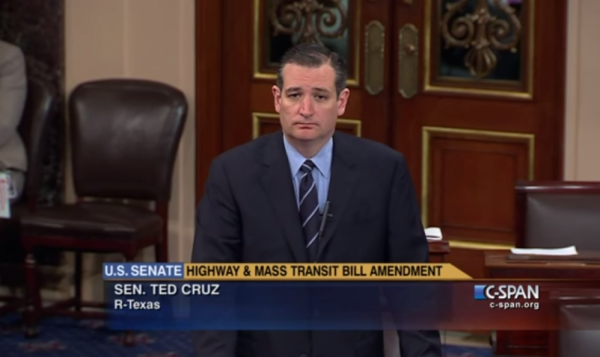 On Friday, Senator Ted Cruz (R-TX) finally called out Senator Mitch McConnell for lying. Yes, and he did it on the Senate floor too!

“Today is a sad day for this institution,” said Cruz. “What we just witnessed this morning is profoundly disappointing.”

The Texas Republican’s remarks come after McConnell set up a procedural vote on Sunday to reauthorize the Export-Import Bank, which saw its charter expire last month. Democrats have said McConnell agreed to allow a vote on attaching Ex-Im to “must-pass” legislation to win support from Sen. Maria Cantwell (D-Wash.) for a trade package earlier this year.

On the floor, Cruz said McConnell in a private conversation denied to him that there was such a deal.

He then addressed the fact that his staff had told him the McConnell was “lying” to him.

“What I told my staff that afternoon, I said, well I don’t know if that’s the case or not. But I don’t see how when the majority leader looks me in the eyes and makes an explicit promise,” he said. “I don’t see how I cannot take him at his word.”

But, of course, we know that McConnell, like all RINOs says one thing and does another. Cruz called this out.

“Well, we now know that when the majority leader looks us in the eyes and makes an explicit commitment that he is willing to say things that he knows are false,” the Texas Senator thundered.

“That has consequences for how this body operates,” he said. “If you or I cannot trust what the majority leader tells us, that will have consequences on other legislation, as well as on how this institution operates.”

Indeed it will, but that didn’t stop former Senate Majority Leader Harry Reid (D-NV), did it?

Cruz then took to the airwaves on the Rush Limbaugh Show on Friday afternoon to expound his accusations of both sides of the aisle lying to the American people and selling them out. However, he was angrier at those of his own party.

“Exactly right,” Cruz said. “That’s part of how Republican leadership got the votes for TPA is by promising to put taxpayers on the hook for hundreds of billions of dollars of loan guarantees that go primarily to a handful of giant corporations. And it’s what I refer to as a Washington cartel. It’s career politicians in both parties who get in bed with lobbyists and special interests. It’s why we’re bankrupting our kids and grandkids. And what’s striking — I mean, Rush, people are so frustrated, ’cause we keep winning elections, and then our leaders don’t do a darn thing they said they were going to do. So we were told in the House of Representatives things will be different.”

“In 2010, the people rose up, we got a Republican majority,” he continued. “And they haven’t done much of anything. Then we were told we just need a Republican majority in the Senate, retire Harry Reid. In 2014, millions of Americans stood up to do that. For six months we’ve had a Republican majority. What have they done? They passed a trillion-dollar Cromnibus plan filled with corporate pork and corporate welfare. We funded Obamacare and President Obama’s executive amnesty, and Republican leadership jammed through the confirmation of Loretta Lynch as attorney general. Every one of those is exactly the same as what Harry Reid would have done. And it’s why people are frustrated.”

He also claimed that Mitch McConnell’s desire for a repeal of Obamacare was not genuine. “He wants a show vote on repealing Obamacare. Now, of course back in October 2013 when Mike Lee and I were leading the fight to defund Obamacare, then Mitch McConnell joined with Harry Reid in leading the fight to preserve Obamacare. So when it actually has teeth, leadership wasn’t with us. But they do want an empty show vote. And, you know, Rush, as you know, a couple of weeks ago I came out with a new book, A Time for Truth, and the entire point of the book is to tell the truth about what is happening behind closed doors, and, in particular, how career politicians in both parties are not telling the truth to the American people. And this was an example of that. And, unfortunately, it’s why we see so many campaign conservatives that pretend to be conservative on the campaign trail but they don’t govern according to what they promised us on the campaign trail.”

I agree with Cruz on all of these things. With that said, I question his support for Trade Promotion Authority and his push for the Trans-Pacific Partnership, which he backed out on at the last minute citing that it was enmeshed in corrupt, backroom dealings. My question, especially in light of his new book, is Senator Cruz, are you being honest about those things with the American people? Did you just now come to the conclusion that Washington is corrupt and engaged in backroom dealings? Or did you know it before due to your wife’s previous affiliations with the Council on Foreign Relations and we are seeing something of one leading the opposition?

Honestly, I appreciate a lot of what Ted Cruz has had to say, but the above I just mentioned and his campaigning for president, an office he is constitutionally ineligible to hold makes me wonder if the American people can trust him. Again, many good things are said and many good things have been expounded by Senator Cruz, but it’s the things that are left unaddressed that give me pause for concern.