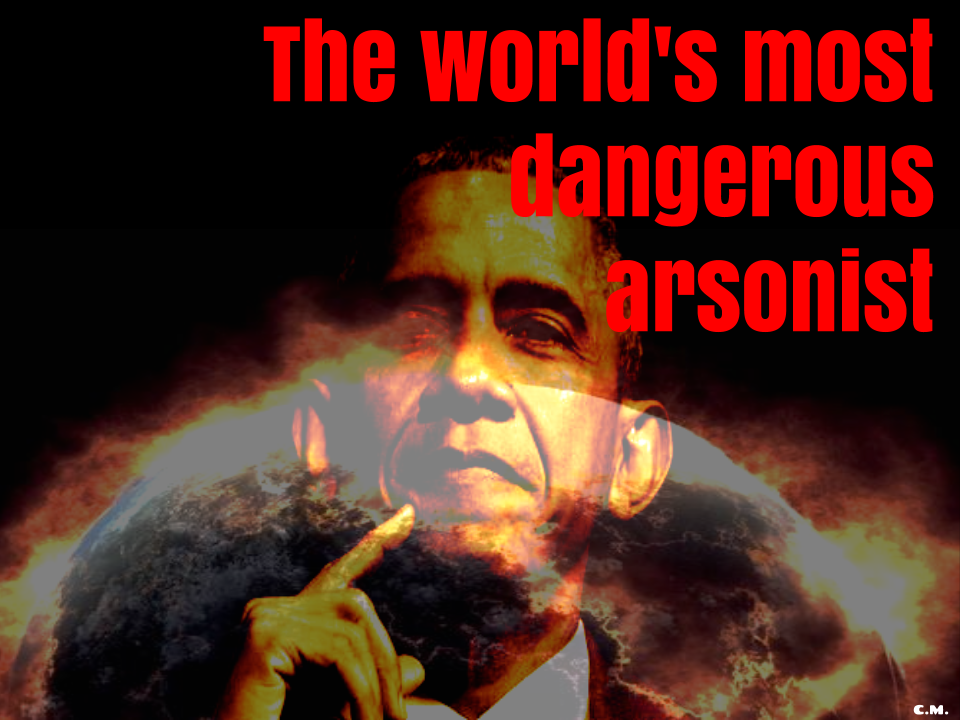 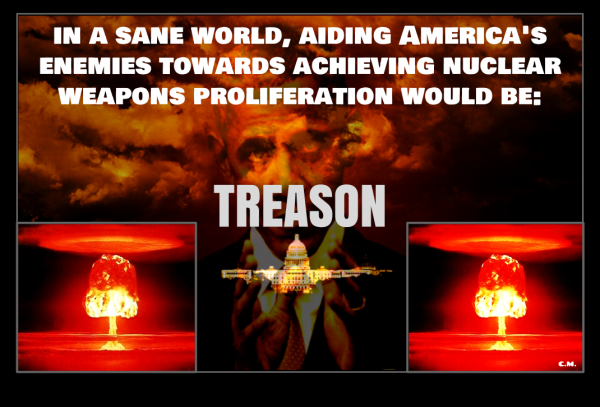 As this Kabuki theater of diplomatic negotiations surrounding Obama’s ‘nuke deal’ with Iran keeps plowing along like an unabating train wreck, we recently learned of yet another disquieting detail previously undisclosed to the public as part and parcel of these negotiations. Never mind Iran having American hostages whose plight is the least of Obama’s concerns, but equally reprehensible is the latest detail revealing how this administration has artfully crafted a provision where not only does this agreement have our own U.S. military and other foreign powers guaranteeing to protect Iran and their nuclear sites from any potential external attacks, but also allows for the United States and other foreign powers to coordinate a military response against the source of such attacks.

“ObamaDeal” explicitly states that the United States and the other P5+1 powers can help Iran deflect and even “respond” to sabotage and nuclear threats to its nuclear sites.

The damming evidence that ObamaDeal directly allows Western powers to help Iran to protect its nuclear sites, and possibly even to stage a counter-attack on the source of the threat, is stated in Annex III of the Joint Comprehensive Plan of Action (JCPOA). Congress is reviewing the agreement and has the option to cancel America’s commitments under the deal.

It doesn’t require much effort of thought to deduce just who the primary source of such a threat is that’s being implied here. Given that Iran vows to wipe Israel off the face of the planet on pretty much a daily basis and throw into the mix Obama’s own torturous relations with Israel and the Jewish State’s Prime Minister Benjamin Netanyahu throughout the course of his entire presidency, you can’t come away from this and not be horrified at how the Obama administration has effectively managed to make allies out of America’s enemies and enemies out of America’s allies. It’s obscene. Especially when it’s not just our ally Israel whom this president appears bent on alienating.

The Israeli prime minister’s public confrontation with President Barack Obama over the U.S. administration’s pursuit of a nuclear bargain with Iran may have drawn all the spotlight this week. But America’s other key allies across the Middle East—such as Saudi Arabia, Egypt and the United Arab Emirates—are just as distraught, even if they lack the kind of lobbying platform that Benjamin Netanyahu was offered in Congress.

“A lot of the Gulf countries feel they are being thrown under the bus,” said Mishaal al-Gergawi, managing director of the Delma Institute in Abu Dhabi and a prominent Emirati political commentator. “The Gulf thought it was in a monogamous relationship with the West, and now it realizes it’s being cheated on because the U.S. was in an open relationship with it.” 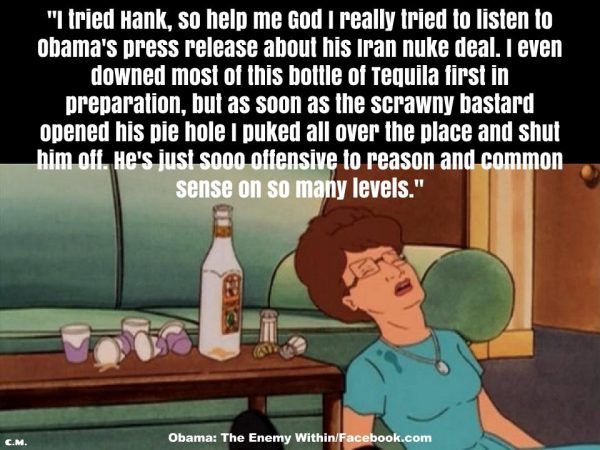 I’ve long ago given up the dupable tendency of allowing myself to think there’s no way that Obama could possibly excavate and sink any lower than he already has in his duplicitous career, because as soon as I did, sure enough Obama quickly managed another spectacular feat of political legerdemain that proved me wrong. Every time. Which now, in hindsight, I guess stands to reason after you consider his dissolute and chronic predilection for lying through his teeth repeatedly to our faces to advance his subversive agendas. His threatening our safety and national security as a matter of necessity to his seditious ambitions. When you compile everything together that this man has systematically accomplished and been allowed to get away with to bring about our accelerated decline for these past 6 1/2 years, it’s just… Mind boggling.

Which again brings me back to how skillfully Obama has managed to pervert our international relations to such an extent that not only is the United States helping to pave the path for nuclear weapons to the largest supporter of Islamic state-sponsored terrorism in the Middle East, but now we’re their protectors too against any military threats possibly posed by Israel and other of our allies whose relationship with America Obama seems to have purposely corroded. So are you feeling the throbbing in your temples yet of an oncoming aneurysm? Welcome to my world.

Allow me to summarize from previous articles I’ve written detailing these various chain of events, beginning with the Obama administration’s ‘latest’ threats against Israel. I say latest because the recently revealed revelation of Obama’s having made the United States protectors of Iran isn’t the 1st time this administration has levied threats against the Jewish State on Iran’s behalf…

In the span of these past 24 hours since the headline first appeared on the Drudge website this past Sunday, the latest expression of Obama’s innate contempt of Israeli Prime Minister Benjamin Netanyahu -and by extension the state of Israel itself-, has spread like an omnivorous wildfire across the various landscapes of the social networking strata. Obama, along with members of his administration and an assortment of Democratic lawmakers have minced no words articulating their grievances over these last several weeks to Prime Minister Netanyahu’s upcoming March 3rd Congressional address in the shadow of the Obama administration trying to broker a ‘secret’ nuclear deal with Iran. Then we had the stunning headline appear on Drudge Sunday, linking readers to an article at israelnationalnews.com by Mark Langfan, underscoring these escalating tensions with the startling disclosure:

In an excerpt from this article, Langfan goes on to explain the details of this incident:

~The Bethlehem-based news agency Ma’an has cited a Kuwaiti newspaper report Saturday, that US President Barack Obama thwarted an Israeli military attack against Iran’s nuclear facilities in 2014 by threatening to shoot down Israeli jets before they could reach their targets in Iran. 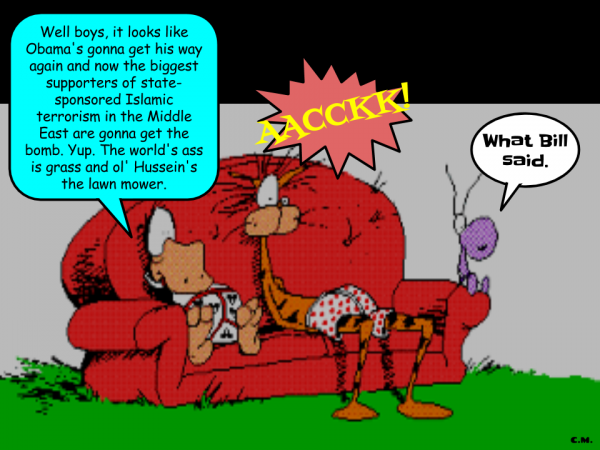 Then there’s these excerpts from another of my articles…

Barack Hussein Obama: A Case Study Of How A Psychopathic Work Of Fiction Became President:  Posted on December 21, 2014 by Chad Miller

~That report comes as Israeli Prime Minister Benjamin Netanyahu said Friday that he “utterly rejects” the emerging nuclear deal between western powers and Iran, calling it a “bad deal” and promising that Israel will do everything it needs to do to defend itself.

That deal includes the key condition for Iran that there must be relief from sanctions, but the Daily Beast’s Eli Lake and Josh Rogin write that “began quietly and modestly five months ago.”

Excerpts from a May 25th, 2011 Opinion piece at The Daily Caller by contributor Joe Walsh, focuses on Obama siding with Palestine in their demands for Israel to return to their 1967 borders:

‘President Obama is not Israel’s friend’

Then in a related article at theblaze.com also dated Novmber 6th, 2014, additional information was disclosed revealing Obama’s deeper political ambitions for Iran, predating his arrival to the White House:

“During the election campaign of 2008, [Obama] dispatched a private emissary, retired Ambassador Bill Miller to Tehran to talk to the Iranian leaders and tell them how great the relationship was going to become once Obama became president,” said Michael Ledeen, a former State Department and National Security Council adviser during the Reagan administration. “So, he’s been after this since before he went to the White House.”

~Edward Klein, former foreign editor of Newsweek and editor of the New York Times Magazine for many years, describes Jarrett as “ground zero in the Obama operation, the first couple’s friend and consigliere.”  Klein — who claims he used a minimum of two sources for each assertion in his book on the Obama presidency, The Amateur — writes in detail about Jarrett opposing the raid on bin Laden.  She told Obama not to take the political risk.  Miniter tells us he listened to her, three times telling Special Operations not to take the risk to go after bin Laden.

We need to understand the role Valerie Jarrett plays in Obama’s private and political life. “If it wasn’t for Valerie Jarrett, there’d be no Barack Obama to complain about,” starts Klein’s chapter on Jarrett.

Then lastly there’s this…

Obama’s Contempt For America Is Only Exceeded By His Reverence For Islam, Posted on February 25, 2015 by Chad Miller

A current headline at Drudge which links to a February 24th Washington Times article by Rowan Scarborough reports that: 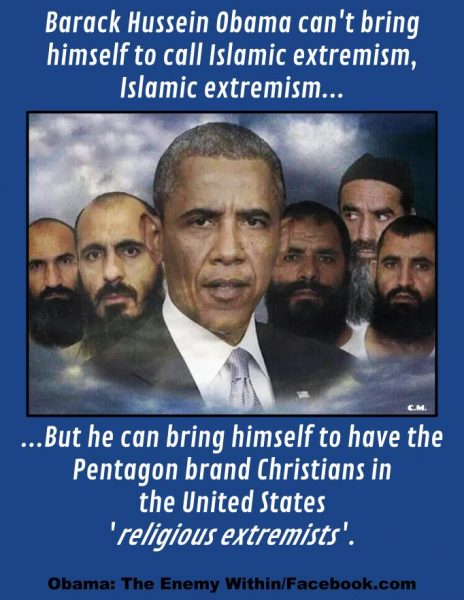 This hearkens back to a similar article by Scarborough in July of 2014, where he detailed the findings of an independent panel appointed by the pentagon and congress which concluded that Obama’s “military strategy” at downsizing troop ranks at that time had left the United States too weak to counter global threats. The timing of this present day headline doesn’t help to instill American’s with an overflowing abundance of confidence for a president who fails miserably at instilling confidence in millions of Americans as it is. But when you have a president who consistently demonstrates more empathy for Islam than he does for the people of his own country, what can you expect?

In the following excerpt, Scarborough’s article goes on to elaborate:

~The U.S. military is shedding so many troops and weapons it is only “marginally able” to defend the nation and falls short of the Obama administration’s national security strategy, according to a new report by The Heritage Foundation on Tuesday.~

Isn’t it a bit ironic that as the United States and we the American people and our livelihoods have languished under Obama’s manufactured malaise of entropy (on purpose and by design mind you), our enemies seem to be the primary beneficiaries of this malignant presidency? The left comport themselves with their disingenuous mock outrage over Giuliani’s remarks when what he said was nothing most of the country hasn’t already been thinking themselves anyway! If anything, Giuliani didn’t go far enough in his lambasting of Obama, but then I’ve observed how nobody in any position of prominence in either the media or on the national political stage ever do. 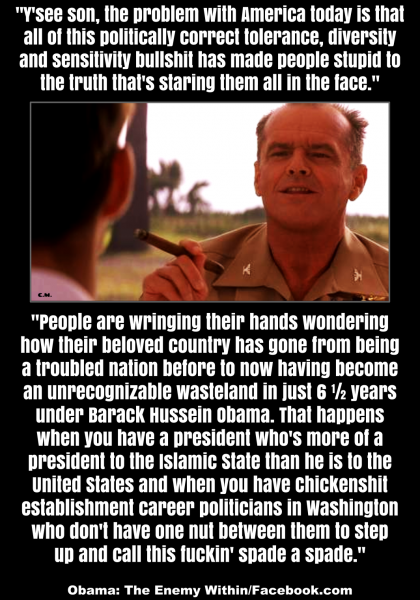 And so here we are. Facing circumstances unlike any other we’ve ever faced before as a nation from a sitting president. Circumstances that have manufactured no shortage of raw materials for conspiracy theorists to build on, but I’m not much into conspiracy theories or recycling them when it comes to my writings. I’m just an observer and can speak only of my own opinions and the intuitions I base them on. Everything I’ve written and recited here when applied to critical thought would naturally conduce towards reaching a specific conclusion. I mean it does, so long as you’re careful to keep reason and common sense segregated from the distorting influence of political correctness.

And from that reasoning as it pertains to these negotiations between Obama, these shady members of his administrative entourage and the Islamic terrorist regime of Iran, all I can ask myself is:

How is purposely aiding, and now protecting and defending enemies of the United States against both ourselves and our allies those enemies threaten not TREASON?!?? 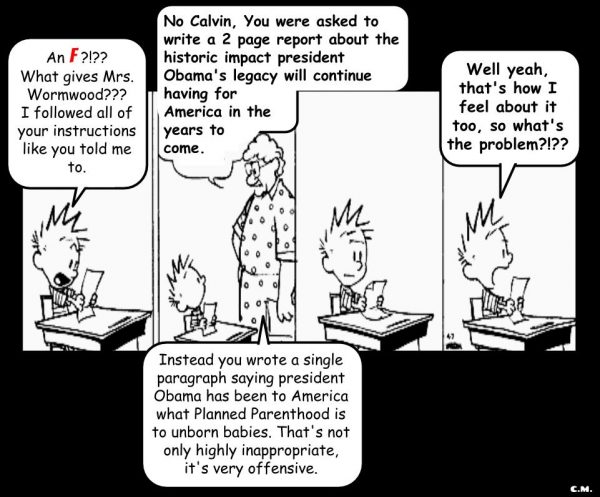