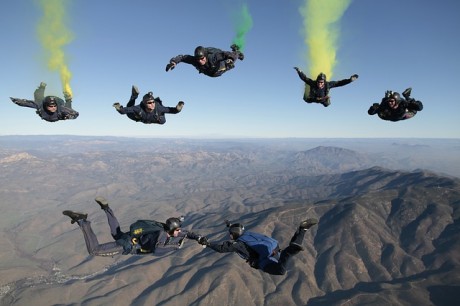 Was last week a preview of things to come? There are quite a few people out there that believe that the stock market would begin to decline in July, and that appears to be precisely what is happening. Last week, the Dow Jones Industrial Average fell by more than 530 points. It was the biggest one week decline that we have seen so far in 2015, and some are suggesting that this could only be just the beginning. By just about any measurement that you might want to use, the stock market is overvalued. But we have been in this bubble for so long that many people have come to believe that this is “the new normal”. In fact, earlier today someone that I know dropped me a line and suggested that our financial overlords may be able to use the tools at their disposal to get this current bubble to persist indefinitely. Unfortunately, the truth is that no financial bubble ever lasts forever, and right now some very alarming things are starting to happen behind the scenes. Over the past couple of weeks, the smart money has been dumping stocks like crazy, and the lack of liquidity in the bond markets is beginning to become acute.  Could it be possible that another great financial crisis is just around the corner?

Last week took a lot of investors by surprise. The following is how Zero Hedge summarized the carnage…

The talking heads on television were not quite sure what to make of this sudden downturn. On CNBC, analysts mainly blamed the usual suspects…

“I think the market’s very much concerned about the commodity (decline),” said John Lonski, chief economist at Moody’s. “The contraction in China manufacturing activity is gaining momentum and the credit market has yet to signal that rates are not about to go higher.”

He also noted a surprising decline in new home sales and continued lack of revenue growth in earnings. Nearly all the commodities are in a bear market and gold and crude settled at lows Friday.

“You’ve got some major growth concerns and that is what’s weighing on investors minds,” said Peter Boockvar, chief market strategist at The Lindsey Group.

And without a doubt, there are some new numbers that are deeply troubling for Wall Street. For example, it is being projected that S&P 500 companies will collectively report a 2.2 percent decline in earnings for the second quarter of 2015. If this comes to pass, it will be the first drop that we have seen since the third quarter of 2012.

The biggest reason for this decline in earnings is the implosion of U.S. energy companies due to the crash in oil prices. The following comes from CNBC…

Thanks to a collapse in the price of oil, the energy sector is slated to report a monster 54 percent drop in earnings and28 percent swoon in revenue, compared to the second quarter in the year prior.

Hmm – unlike what so many others were saying initially, it turns out that the oil crash is bad for the U.S. economy after all.

But just like at this time of the year in 2008, most people fully expect that everything is going to be just fine. So many of the exact same patterns that we witnessed the last time around are playing out once again, and yet most of the “experts” refuse to see what is happening right in front of their eyes.

When things crash this time, it won’t just be stocks that collapse. As I have been writing about so frequently, we are also headed for an implosion of the bond markets as well. The following comes from Dr. David Eifrig…

In the U.S. Treasury securities market, financial-services giant JPMorgan Chase estimates that five years ago, you could move about $280 million worth of Treasury securities before your trades moved the market’s price. Now, that’s down to $80 million… a decline of more than 70%.

When a panic sets in, reduced liquidity can cause big swings in market prices.

There is that word “liquidity” again. This is something that I have repeatedly been taking about. Just check out this article from a little over a month ago. A bond is only worth what someone else is willing to pay for it, and if the market runs out of buyers that can cause seismic shifts in price very rapidly. Here is more from Eifrig…

In a run-of-the-mill bear market, you just have a downward trend… When enough investors are selling bonds, it drives down prices. Falling prices lead more investors to start selling. We see that all the time.

A liquidity crisis goes even further. It’s like a classic run on a bank… Without sufficient liquidity, the sellers don’t just see lower prices… they see no prices. Since no one wants to buy bonds at this particular time, the price for them effectively becomes zero.

There has been a lot of speculation about what will happen in the second half of 2015.

We only have a little over five months to go in the year, so it won’t be too long before we see who was right and who was wrong.

Our perceptions of the future are very much shaped by our worldviews. All the time, I get “Obamabots” that come to my website and leave comments on my articles telling me how Barack Obama has “turned the economy around” and has set the stage for a new era of prosperity in America.

Despite all the evidence to the contrary, they choose to believe that things are in great shape because that is what they want to believe. Just check out the results from one recent survey…

While 55 percent of Democrats reported feeling positive about the economy, for example, just 25 percent of Republicans felt the same from March 25 to May 27.

When asked if they thought the economy would improve over the next 12 months, 53 percent of Democrats said yes. Only 23 percent of the Republicans in the survey agreed.

The same perception gap extends to the far future, with 41 percent of Democrats believing that the next generation will be better off than their parents, and just 24 percent of Republicans saying the same.

To me, those numbers are quite striking.

Many Democrats very much want to believe that things are getting better because Barack Obama is in the White House.

Many Republicans very much want to believe that things are totally falling apart because Barack Obama is in the White House.